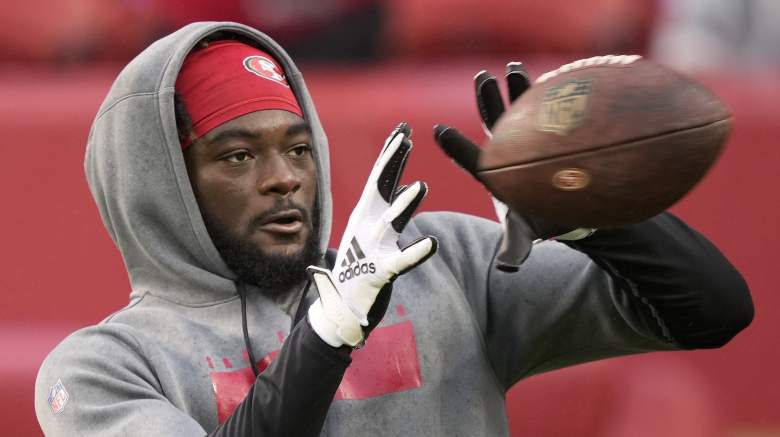 The New England Patriots have made splashy moves to add wide receivers in the past. The team acquired Randy Moss in 2007. They added Brandin Cooks in 2017 and Mohamed Sanu in 2019. The latter move was the least successful, and the most recent. Could that serve as a deterrent for Bill Belichick and Co. considering they have a bad history with finding wide receivers?

We’ll have to wait for November 2 at the trade deadline to see which direction they go, but one Patriots analyst sees an unlikely, but “dream scenario,” where New England goes after the San Francisco 49ers’ Brandon Aiyuk.

If they [Patriots] do try to add a receiver at the deadline — which honestly should not be their priority as of now — it would likely be a receiver on their rookie contract, like an Isabella, or Denzel Mims, if the New York Jets are looking to part ways. But with the struggles we just outlined with adding a receiver mid-season, the Patriots could be best just rolling with what they have now. In a dream scenario, New England could pry Brandon Aiyuk from Kyle Shanahan’s grasp. The electric and versatile second-year receiver has been put in the dog house this year after a strong rookie season. It’s unlikely San Francisco is ready to move on after they traded up to select him in the 2020 NFL Draft, but if they are, New England should certainly be involved. Aiyuk is a dynamic game-changer that would add a versatile threat to this offense.

In 12 games last season, Aiyuk’s rookie campaign, he made 60 receptions for 748 yards and 5 TDs. Bigger things were expected of him in 2021, but that hasn’t materialized.

In 6 games, Aiyuk has compiled just 9 receptions for 96 yards and a TD. That sounds downright N’Keal Harry-ish.

What Would the Patriots Have to Give Up to Acquire Brandon Aiyuk?

Despite Aiyuk’s falloff from last season, you’d have to believe the Niners would ask for a third-round pick, at the very least to get him. Maybe a third-rounder and N’Keal Harry might be a strong offer to the Niners in exchange for Aiyuk and veteran, but little-used cornerback Dre Kirkpatrick.

As Hines pointed out, the Niners dealing Aiyuk seems like a dream, but if the Patriots wanted serious consideration, the trade offer would have to include a serious draft asset.

While adding a dynamic playmaker at wide receiver seems like a good idea for the Patriots, New England has bigger issues on their roster.

At this point, they are so thin at cornerback, that if the team does engage in a trade deadline deal, the secondary should be the top priority. The Patriots signed Brian Poole and D’Vante Bausby to their practice squad to fill the gaps, but truthfully, it would ideal if the team could add a player who could come in and start alongside J.C. Jackson.

3 Joe Gibbs Drivers in Need of Points After Texas