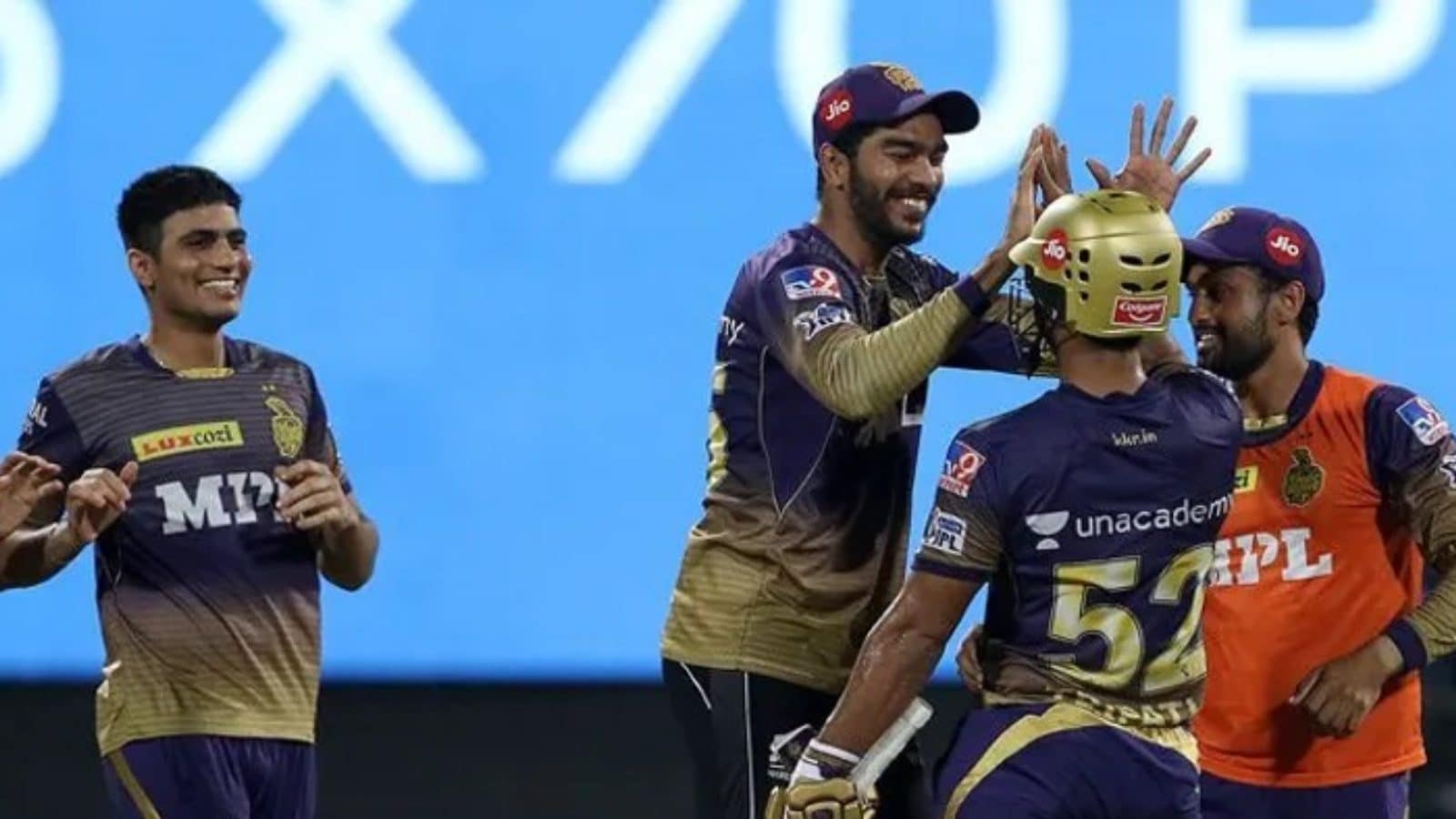 Kolkata Knight Riders defeated Delhi Capitals by three wickets in a thrilling Qualifier 2 of the IPL 2021 to set up a final date with Chennai Super Kings. KKR chased down 136 in 19.5 overs and nearly squandered the stupendous start their openers had given them on a challenging Sharjah pitch on. DC posted a below-par 135/5 and had given up hopes when KKR raced to 96/0 in 12.1 overs but then after KKR lost six wickets for the addition of just seven runs, the contest turned on its head before Rahul Tripathi sealed the deal with a six.

KKR needed 13 runs off 25 deliveries when Nitish Rana (13) fell to Anrich Nortje. And in the following three overs, they added just six runs to their total and lost three more wickets. Off the final over, they needed 7 runs and Ravichandran Ashwin picked two wickets in as many deliveries to leave KKR needing six off two.

However, Tripathi launched the penultimate delivery of long-off to end DC’s hopes.

Earlier, KKR, led by mystery spinner Varun Chakravarthy, produced a clinical bowling display on a slow pitch to restrict Delhi Capitals to 135 for 5. Sent in to bat, DC batters struggled on a sluggish pitch with the KKR bowlers bowling a tight line and length. Opener Shikhar Dhawan top-scored with a 39-ball 36 while Shreyas Iyer remained not out on 30 off 27 balls.

Chakravarthy took two wickets for 26 runs while Lockie Ferguson and Shivam Mavi got one each.

After seven dot balls in the first two overs, DC took 12 runs from the third with Shaw hoisting Shakib Al Hasan for a big six.

Dhawan joined the party in the fourth over, smacking two consecutive sixes off Sunil Narine as DC amassed 14 runs from the veteran West Indian.

Chakravarthy broke the dangerous-looking partnership by having Shaw LBW with his first delivery of the day with the batter playing a wrong line to his googly.

Ferguson was impressive as he conceded just nine runs from his first two overs as DC reached 38 for 1 at the end of Power Play overs.

After a quiet period during which Mavi, Narine and Chakravarthy bowled a tight line and length, Dhawan got a boundary in the 10th over to reach 65 for 1 at the halfway mark.

With odd ball skidding low, it was getting difficult to get runs and DC were dealt a blow when Mavi, who was bowling beautifully, got rid of Marcus Stoinis who was playing only his second match in the UAE leg.

With pressure building on the DC batters, Dhawan fell in the 15th over while going for a big shot. He could only get an outside edge off a Chakravarthy delivery for Shakib Al Hasan to take a diving catch at backward point.

DC were 83 for 3 in the 15th over when captain Rishabh Pant (6) came in and he disappointed in a crucial match as he went for a big shot the next over only to balloon a Ferguson delivery for Rahul Tripathi to take a regulation catch.

There was no lack of drama as Shimron Hetmyer was caught by Shubman Gill off Chakravarthy in the 17th over but it turned out to be a no ball. DC managed to score 36 runs in the last three overs to put up a decent total in the end.

Romelu Lukaku’s record since leaving Chelsea as he completes return

How to watch Austria vs Scotland online and on TV tonight

I-League 2021 Qualifiers: Rajasthan United FC vs FC Bengaluru United Schedule and Match Timings: When and Where to Watch RUFC vs FCBU Telecast, Team...

5 Ways To Avoid Getting Creamed By Higher Taxes