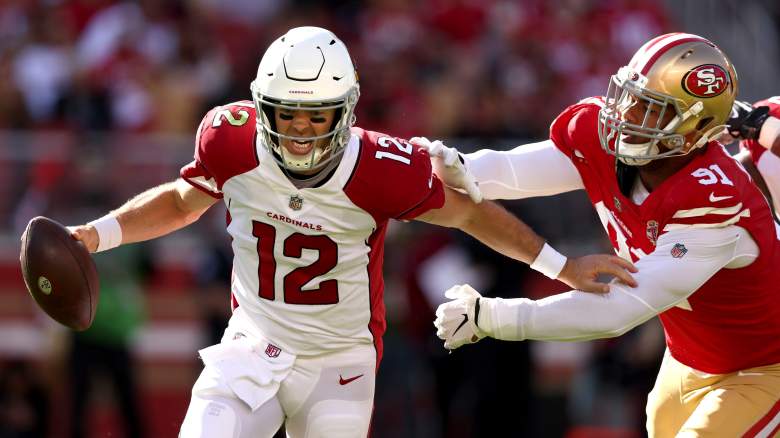 Kliff Kingsbury recounted an offseason conversation he had with Colt McCoy about playing quarterback for the Arizona Cardinals.

“I got into the discussion about, ‘Hey, you can be a great mentor, a great leader and all this,’ ” the Cardinals coach said. “He stopped me and he’s like, ‘I can really play.’ ”

McCoy backed up that statement on the field Sunday, November 7, by starting in place of injured QB Kyler Murray and leading the Cardinals to a 31-17 road win over the San Francisco 49ers.

McCoy was nearly flawless in his first start for the Cardinals (8-1), completing 22 of 26 passes for 249 yards and a touchdown against the 49ers (3-5). He completed a career-high 84.6% of his passes in the victory, which ranks second in franchise history behind Kurt Warner.

“If I didn’t think I could still play, I wouldn’t be playing,” McCoy told reporters after the game. “But I also understand my role. There’s not a bigger fan of Kyler Murray than me right now. He does some unbelievable things. I’ve learned a lot from him in my short time here. He’s very special. I’m not Kyler Murray.”

In the days leading up to the game, Kingsbury expressed confidence in McCoy’s ability to step in for Murray and lead the team, saying the QB prepares like starter.

“That’s how he prepares each and every day,” he said, calling McCoy a “consummate professional.” “He knows where to go with the ball, gets it out quick, gets us into the right play.”

‘I Pride Myself in Being Ready to Play’

McCoy, 35, signed a one-year deal with Arizona in March after playing the 2020 season with the New York Giants. He was brought in to be Murray’s backup and also serve as a mentor to the third-year QB.

McCoy said the backup role doesn’t change how he prepares to play.

“I dial in each week,” he said. “Whether I get reps during the week to play or if I’ve got to come off the bench in a game, I pride myself in being ready to play.”

The official announcement that Murray would miss a game for the first time in his NFL career came just 90 minutes before kickoff.

McCoy said it started “looking like I might go” after Murray didn’t practice Friday, November 5. The 12-year veteran had practiced with the starters all week while Murray rested his injured left ankle.

The Cardinals also played without their top two receivers, as DeAndre Hopkins was sidelined with a hamstring injury and A.J. Green remained on the Reserve/COVID-19 list.

“It’s a sign of a good team to have guys step in and fill in and find a way to make it work,” McCoy said.

Cardinals Had Confidence in Colt McCoy

McCoy’s strong showing against the 49ers didn’t come as a surprise to his teammates, who praised the QB in postgame interviews and on social media.

“He played as I expected,” offensive lineman D.J. Humphries said. “We always knew there was going to be a moment in time that we were going to have to lean on him. It’s so exciting to see him go out there and thrive and lead us to a win.”

Running back James Conner, who had a monster game against the 49ers, said McCoy “did his thing today.”

“Colt’s a veteran. He’s a legend,” Conner said. “He has an incredible resume, and so we had all the trust and confidence in him. He did what any other pro does.”

How about Colt McCoy tho!

Unchanged Team for KKR Likely, Unadkat May Get a Look in

I Don’t Mind Looking Ugly at Times as Long as I Can Get the Job Done for the Team: Rohit Sharma

F1’s Lando Norris on moving to Monaco: ‘People do many things in life for money’