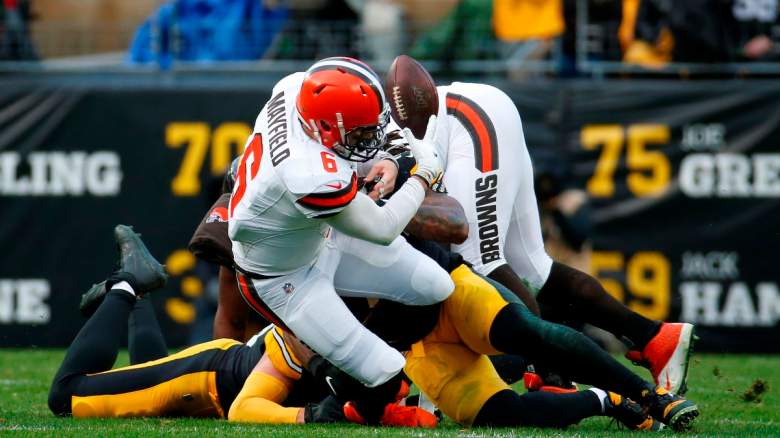 On Friday Ian Rapoport of NFL Network reported that Cleveland Browns quarterback Baker Mayfield is expected to start on Sunday against the Pittsburgh Steelers, this “despite a torn left labrum & shoulder fracture.” Assuming Mayfield does play, Cleveland radio host Tony Rizzo (850 AM ESPN Radio) believes that the Steelers defense will “take a (cheap) shot at Baker” because they are “a dirty team.”

Steelers outside linebacker T.J. Watt dismissed this line of thinking during his media session on Friday October 29. “We don’t know the true extent of any injuries or ailments, and even if we did, it’s not like we’re going to tackle a guy extra-hard,” he insisted.

But it’s rich that a member of the Cleveland media is accusing Steelers defenders of being cheap shot artists, because two of the most infamous quarterback hits in NFL history were perpetrated by Cleveland defensive ends against Steelers quarterbacks.

Exhibit A: ‘One of the Worst Things I’ve Ever Seen on a Professional Sports Field’

The more recent of the two incidents occurred on November 14, 2019, at FirstEnergy Stadium in Cleveland. With eight seconds to go in a game that the Browns would win 21-7, Browns edge rusher Myles Garrett sparked a brawl when he hit Steelers quarterback Mason Rudolph over the head with his own helmet. In the immediate aftermath, Browns quarterback Baker Mayfield repeatedly called Garrett’s actions “inexcusable.”

Upon seeing the replay, Joe Buck—who was calling the nationally televised Thursday Night game alongside former Dallas Cowboys quarterback Troy Aikman—called the incident “one of the worst things I’ve ever seen on a professional sports field.”

Yet the hit that Browns defensive end Joe ‘Turkey’ Jones put on Steelers quarterback Terry Bradshaw on October 10, 1976, was horrifying in its own right. With just under 11 minutes to go in a game the Browns would win 18-16, Jones drove Bradshaw into the ground headfirst, causing a head & neck injury that required the Steelers QB to be removed from the field on a backboard.

In 2007, Bradshaw related how he suffered a spinal contusion on the play and that he “didn’t have feeling for two days. (Then on) the third day the feeling started from my toes and worked its way up,” he said.

Never mind that Jones’ hit was viewed in a different light 45 years ago. In his recap of the game for the Cleveland Plain Dealer, reporter Chuck Heaton described the Browns’ win as “spine-tingling.” Heaton also noted that Jones was flagged for unnecessary roughness on the play but said “it seemed to be a questionable call.”

On Sunday Cleveland quarterback Baker Mayfield will attempt to become the first Browns QB since Bernie Kosar to beat the Steelers three straight times, this according to Jake Trotter, who covers the Browns for ESPN. Kosar accomplished that feat in 1988-89, when the Steelers fielded teams that finished 5-11 and 9-7, respectively.

Discover more from Heavy on Steelers↓

Unlock the latest Pittsburgh Steelers news, rumors and exclusives — direct to your inbox. ↓

Emma Raducanu breezes through first round of US Open qualifying

Messi, Neymar back in PSG squad for Champions League opener