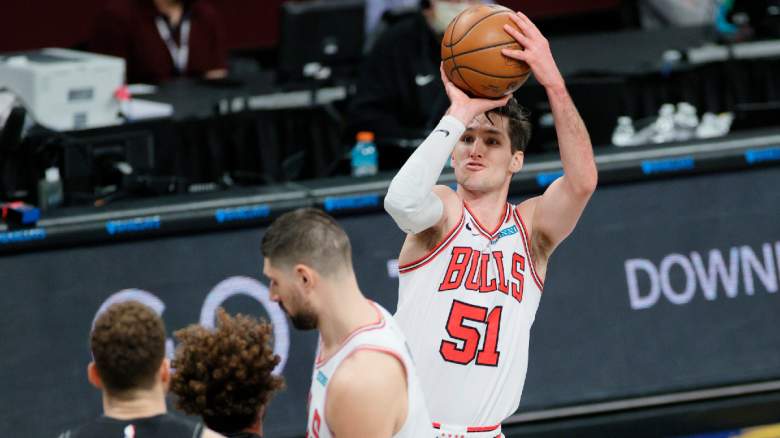 Chicago Bulls guard Ryan Arcidiacono fires up a shot during a game against the Brooklyn Nets.

The Boston Celtics have a handful of decisions to make on the back end of their roster before opening night of the 2021-22 NBA season and the whittling down process has already begun. According to a report on Friday, two names have already been designated for the chopping block.

Per The Athletic’s Jay King, point guard Ryan Arcidiacono and power forward Juwan Morgan will be waived by the Celtics.

Neither player saw significant court time or made a noticeable impact on the floor during Boston’s exhibition slate. For his part, Arcidiacono made two appearances for the Celtics — logging 22 total minutes — and failed to score a point as he was 0-for-5 from the field.

Morgan, meanwhile, made just a single, six-minute appearance for Boston, missing two three-point shots along the way. He dealt with a leg injury throughout training camp.

Both Players Could End up With Boston’s G League Affiliate

Despite their being released, Arcidiacono and Morgan may just remain in the Celtics system. According to CelticsBlog’s Keith Smith, the team is hopeful that they, along with Chris Clemons and Luke Kornet, will ultimately find their way to the G League’s Maine Celtics.

In any case, both have shown an ability to perform at the NBA level.

As for Morgan, the 6-foot-7, 230-pound big man played sparingly over the last two seasons with the Utah Jazz. However, during the 2020 NBA Playoffs in the Orlando bubble, he was thrust into a prime role when he started Game 1 of the team’s first-round series with the Denver Nuggets. In 25 minutes of action, he grabbed seven boards and was a team-high plus-17 while on the court.

The latest Celtics news straight to your inbox! Join the Heavy on Celtics newsletter here!

A Positive Development for Jabari Parker

On October 13, Heavy.com’s Sean Deveney relayed that Jabari Parker could be the favorite for Boston’s final roster spot. If Arcidiacono and Morgan are both earmarked for spots in the G League, things may just be trending that way for the former No. 2 overall pick.

During the preseason, Parker did the same things that he has done since he first entered the league in 2014 — get buckets. Over three appearances, the 26-year-old put up 7.0 points, 1.3 rebounds and 1.3 assists in 17.7 minutes per game. Along the way, he knocked down 50% of his triples.

Throughout his career, defense has been an issue for Parker (and two ACL injuries have done little to help him there). However, he did post a defensive rating of just 100.0 during exhibition play and he averaged 1.3 steals per game as well.

Switching From One of The Best Batting Wickets in Abu Dhabi to Sharjah Was Tough: Sanju Samson

Sam Curran ruled out of T20 World Cup with back injury