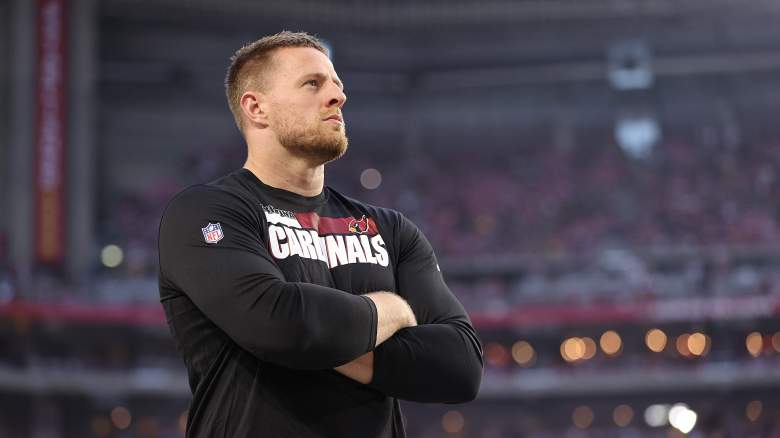 J.J. Watt watches from the sideline during the Arizona Cardinals’ 24-21 loss to the Green Bay Packers on October 28.

Despite speculation that the shoulder injury J.J. Watt suffered October 17 would end his first season with the Arizona Cardinals, the veteran defensive lineman has yet to be placed on the injured list.

And according to general manager Steve Keim, the Cardinals have not ruled out Watt’s return in 2021.

Keim said Watt has been “consulting with a couple of additional specialists” about the shoulder injury, which ESPN and NFL Network have reported as a torn labrum, bicep and rotator cuff, along with being dislocated.

Without providing specifics about the injury, Arizona coach Kliff Kingsbury confirmed Watt would have surgery but said he was “not sure on the exact timetable” for the recovery.

“He’ll have surgery and then we’ll kind of take it from there,” Kingsbury told reporters following the Cardinals’ 24-21 loss to the Green Bay Packers on Thursday, October 28.

“I know that surgery is an option, but at the same time, I think there are some things that are possibly put in place that we want to play this thing out with a little bit more time and sort of see how he responds,” he said. “To me, if there is anybody who can bounce back and do it, it’s J.J. Watt.”

No matter the seriousness of Watt’s injury or the timetable for his return, Keim said the offseason addition of the 11-year veteran has been a success.

“I’ve been obviously very excited about what he’s brought to this football team — leadership, intangibles, toughness, everything that he’s sort of represented,” he said. “So (we) certainly owe it to him to give him a little bit of time to see how this plays out.”

Watt, 32, the longtime Houston Texans star who signed a two-year deal with Arizona in March, has been a big part of the Cardinals’ success this season, leading the team in quarterback pressures (28), hurries (16) and QB hits (11), according to PFF.

Through seven games, Watt had 16 total tackles (including six solo stops), one sack and two passes batted away, and he seemed to be getting more comfortable each week in Vance Joseph’s defense.

Kingsbury said it’s impossible to “replace a presence like that.”

“I think a guy like that’s irreplaceable, right? I mean, he was having a heck of a season,” the Cardinals coach said. “It’s unfortunate that (the injury) happened, but we’ve got to get some other guys to step up.”

Getting D-Line Help Via Trade a Possibility

“Obviously, having those two guys out was not ideal with J.J. going out as well,” Kingsbury told reporters.

The Cardinals got some good news Friday, October 29, when Peters cleared the NFL’s COVID-19 protocols.

The Cardinals also are hopeful that Lawrence will return for their November 7 road game against the San Francisco 49ers.

Defensive end Jordan Phillips played a season-high 50 snaps against the Packers after spending the first five weeks of the season on the injured list with a back issue. Getting those three defensive lineman healthy at the same time certainly would help offset not having Watt in the lineup, Keim said.

“I feel like we have a lot of depth (on the defensive line), with some young players that are doing some good things,” he said. “I think Jordan Phillips has done a nice job since he’s come back and was disruptive (Thursday) night a few different times.”

Keim also addressed the possibility of adding a defensive lineman via trade before the November 2 deadline.

“I think that we have some quality players in there. It doesn’t mean though that if there were opportunities that presented themselves that we wouldn’t pull the trigger,” he said. “We’re always open for business. If an opportunity makes sense both business-wise and for our roster, we’ll certainly jump on it.”

Follow @jaredzona and @sanudo_ry on Twitter for all the latest Arizona Cardinals breaking news, rumors, roster moves and

New Jobs Surged By Nearly 1 Million In July As Unemployment Rate Drops To Better Than Expected 5.4%