Bucs’ Antonio Brown on Playing With Ben Roethlisberger: ‘It Was a Blessing’ 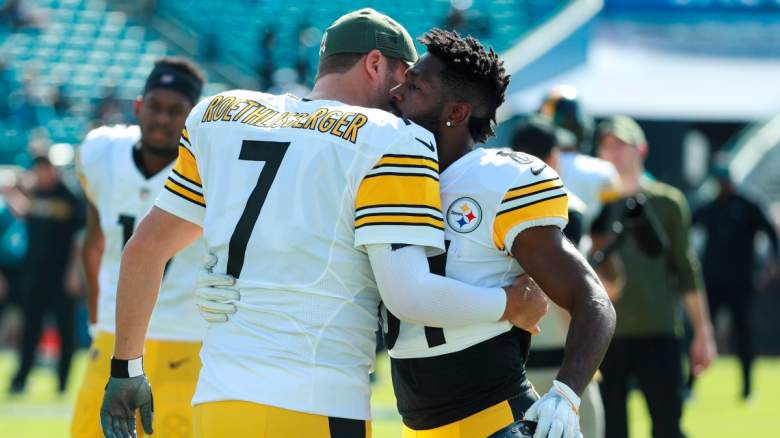 Ben Roethlisberger and Antonio Brown embrace before a game against the Jacksonville Jaguars on November 18, 2018.

Last Sunday former Pittsburgh Steelers All-Pro wide receiver Antonio Brown had seven catches for 124 yards and two touchdowns in a 45-14 victory over the Miami Dolphins. In the process he established a new record by reaching the 900-reception mark faster than any player in NFL history, doing so in just his 143rd career game. The previous record was set by Marvin Harrison (Indianapolis Colts), who, according to ESPN, did it in 149 contests.

‘A Blessing’ to Play With Roethlisberger, Brady

After the game, Brown was asked about reaching the milestone.

“That’s something that I’m really grateful for, but I couldn’t do it by myself,” he said. “I’ve been able to play with some great quarterbacks (like) Ben Roethlisberger (and) Tom Brady. It’s a blessing to play with guys like that, be able to get the ball and be on that trajectory.”

Indeed, Brown reaped the rewards of playing with Roethlisberger for nine seasons, much like countless other Steelers receivers. Between 2010-18, Brown had 837 receptions with 74 touchdown catches, which remains the lion’s share of his career production. During that period he also made the Pro Bowl seven times, while being named All-Pro in four of those years (2014-17), this according to Pro Football Reference.

In the time since, Brown has played in just 13 career games, adding a comparatively modest 864 yards and eight receiving touchdowns to his career totals.

Antonio Brown: ‘We All Need Conflict’

While meeting with the media after his performance against the Dolphins, Brown professed to experiencing personal growth—and didn’t hesitate to allude to the off-the-field troubles he has experienced in recent years, including a variety of legal issues.

Personal growth aside, he’s still a pretty good football player at 33 years old. In four games this season he has produced 20 catches for 325 yards and three touchdown catches, on pace for career highs in yards per target (11.2) and yards per touch (11.8).

He gets a chance to build on those totals on Thursday Night Football, when the Buccaneers (4-1) are back in action against the Philadelphia Eagles (2-3) at Lincoln Financial Field. Kickoff is at 8:30 p.m. ET.

5 things we learned from the weekend’s Premier League action

Unfortunately India Doesn’t Have Too Many All-Rounders in Top-Six: Ravi Shastri

Nothing is certain but want to stay with this team till Paris Olympics: PR Sreejesh | Hockey News – Times of India

Unforgettable trees from literature | The Times of India