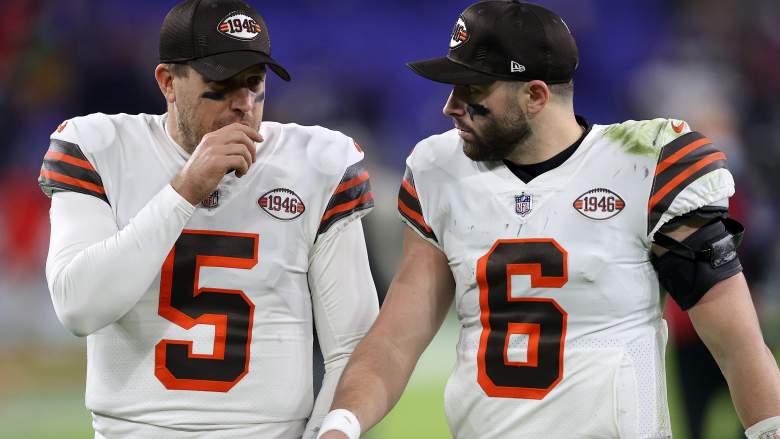 Quarterbacks Case Keenum and Baker Mayfield of the Cleveland Browns.

There are calls for the Cleveland Browns to bench Baker Mayfield, but don’t expect the team to be making that move any time soon.

Browns head coach Kevin Stefanski was asked about the prospect of sending a banged-up Mayfield to the bench for Case Keenum after the bye week and gave a decisive answer to what has become an irritating question.

“No,” Stefanski said, before following it up with more. “Let me ask you a question. Why would we do that? We’re not doing that.”

Mayfield wasn’t great but certainly wasn’t the only problem the Browns had against the Ravens. He finished the game with 247 yards — his second-highest total of the season — and a touchdown. That came with the Ravens bringing pressure all night, who were looking to take away the Browns stellar ground-game and force Cleveland to seek downfield completions. The Browns finished with just 40 rushing yards — a season-low.

“Our run game had been very good, and we’ve run against loaded boxes like that,’’ Stefanski said. “So, I think, as a run offense, we expect to do better than that. And we will look at how we can.”

The Browns defense did their job against the Ravens, forcing four interceptions out of the former MVP. However, the Browns turned that into just three points, which is unacceptable in such a tight matchup.

With that being said, Stefanski — who calls the offensive plays — knows they need to score more points.

“It’s frustrating. It is very frustrating,’’ Stefanski said. “To not score enough, it’s always a combination of things—staying on the field on third down, trying to run the ball effectively and getting in the red zone, all of those things. But we’re just not doing a good enough job, and that starts with me.”

As Cris Collinsworth mentioned on the broadcast multiple times, the Browns really lack a potent downfield threat at wide receiver. Mayfield’s lone touchdown pass went to tight end Daivd Njoku, who is an athletic freak and can be dynamic running routes.

What didn’t help Mayfield is that one of his trusty pass-catchers, Rashard Higgins, was a healthy scratch, leaving the Browns with just Jarvis Landry, Donovan Peoples-Jones and Ja’Marcus Bradley. Browns head coach Kevin Stefanski explained after the game why Higgins was a surprising scratch.

“Just felt like that was the plan going into this week,” he told reporters. “That changes weekly. There’s so many things to consider with what our game plan looks like, special teams, etc.”

Browns Kevin Stefanski on Rashard Higgins being inactive: “Just felt like that was the plan going into this week. That changes weekly. There’s so many things to consider with what our gameplan looks like, special teams, etc.”

Higgins has just 15 catches for 185 yards and one touchdown this season. He played on 72 percent of the snaps last week in a 13-10 victory over Detroit but was taking on a starting role with Peoples-Jones out of the lineup. With Peoples-Jones back, Higgins became the odd man out.

The Browns have a bye week to regroup, get healthy and hopefully slow down the drama. They’ll face the Ravens again, this time at home at FirstEnergy Stadium, on December 12.

Discover more from Heavy on Browns↓

Unlock the latest Cleveland Browns news, rumors and exclusives — direct to your inbox. ↓

Manchester United needs a rebuild from the ground up

When does the Australian Open start and how can I watch it?

One in TWELVE children in England ‘had Covid last week’