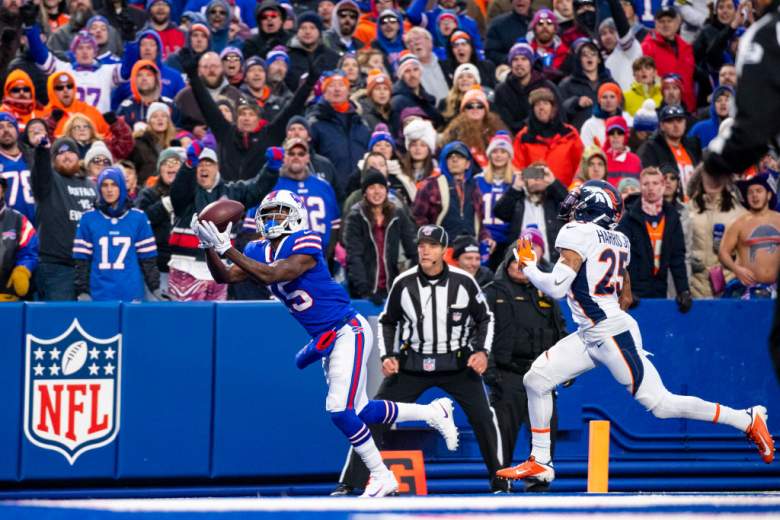 If free-agent signee John Brown can do for the Denver Broncos what he’s done for other teams in the past, his addition will be a boon to the sagging Broncos’ offense.

When the Denver Broncos lost wideouts Jerry Jeudy and KJ Hamler to devastating injuries, during the first three weeks of the 2021 season, it meant quarterback Teddy Bridgewater would be missing key components to a passing attack that had high hopes entering the season.

And with a hated AFC West divisional rival coming to Denver, October 17, the Broncos (3-2) are in need of more offensive firepower, as their current points per game average (20.4) can attest.

ALL the latest Broncos news straight to your inbox! Join the Heavy on Broncos newsletter here!

Speedy Help Is on the Way

The Broncos will be hosting the Las Vegas Raiders, October 17, and while the Raiders (3-2) aren’t an offensive juggernaut either (22.6 points per game), they have such a surplus of speed at the receiver position — including tight end Darren Waller — that they could afford to release one of the fastest players in the league, wideout John Brown.

The well-traveled veteran was released by the Buffalo Bills in March 2021, and was quickly added to the Raiders’ roster, via a one-year deal for $3.75 million. He was among the final roster cuts by Las Vegas, August 31. The Raiders decided Waller and wideouts Henry Ruggs III, Bryan Edwards, Hunter Renfrow, Willie Snead, and Zay Jones were more than enough to compensate for the removal of Brown.

The jettisoning of Brown, a former Pittsburg State star, meant he was eligible to sign with any other franchise. Luckily for the Broncos, he chose them and signed a free-agent contract, October 12. Brown will start off on the Broncos’ practice squad.

Brown may see action sooner, rather than later, as the Broncos are in need of big-play passing options with Jeudy (ankle) out for at least another month, and Hamler (ACL) lost for the season. A third-round pick in 2014, Brown possesses breakaway speed. He was clocked with a 4.34 40-yard dash at the NFL Combine, and would instantly be the fastest wideout in Denver, should he make the active 53-man roster.

If the Broncos eventually call up Brown to the active roster, he could be a boon to their sagging passing attack. When the Arizona Cardinals selected him, he made an immediate impact as a rookie, tallying 48 catches for 696 yards and five touchdowns. His sophomore season was even more impressive, as he notched 65 catches for 1,003 yards and seven touchdowns.

He spent two more mediocre seasons in Arizona, where he registered just 60 catches total, then a decent season with the Baltimore Ravens in 2018 (42 catches for 715 yards and five touchdowns), before heading to the Bills for a bit of a resurgence in 2019. During that maiden season in Buffalo, Brown notched career highs in catches (72) and yards (1,060) to go along with six touchdown receptions.

His two seasons in Buffalo were rejuvenating, as prior to signing with the Bills, he had a career completion percentage of 50.2%. But during his two seasons in upstate New York, that number improved to 62.9%.

Brown’s signing comes at a great time for the Broncos, as the receiving corps is in a bit of a flux. The team recently brought in veteran David Moore after the Hamler injury, but there’s still room to improve the depth chart. Moore’s 13 career touchdowns are more than any receiver on Denver’s roster. But as good a red zone threat that Moore can be, he doesn’t possess the same game-breaking speed that’s capable of getting behind the defense.

So, Broncos Country will definitely ask, what can Brown do for them?

Barcelona has Cristiano Ronaldo posters all over dressing room walls

I Don’t Mind Looking Ugly at Times as Long as I Can Get the Job Done for the Team: Rohit Sharma

India vs England: Once UK opened for all, ECB did not opt for a series-specific bio-bubble | Cricket News – Times of India

PANDEMIC FALLOUT | Hunted by Covid-19, Day 550 in the Woods Sans Sleep, Food, Sex or a Companion