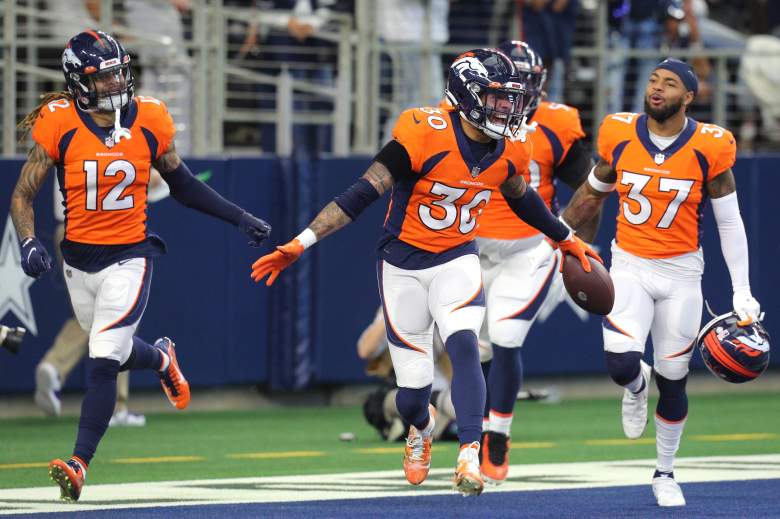 Caden Sterns #30 of the Denver Broncos celebrates with teammates after an interception during the fourth quarter against the Dallas Cowboys at AT&T Stadium on November 07, 2021 in Arlington, Texas.

Vic Fangio’s Denver Broncos produced their greatest performance of his era against all odds in Arlington, Texas.

With Cowboys’ quarterback Dak Prescott back after a week’s absence and Von Miller being traded to Los Angeles, all seemed lost as the Broncos traveled to Jerry World. Yet they had other ideas.

Before Dallas piled on some points in garbage time, Denver led 30-0. In no way did the score flatter the road team. Despite his own modesty, this was a showing which firmly enhanced Vic Fangio’s reputation as a defensive mastermind.

Denver’s defense held Prescott to the single-lowest completion percentage (35.7%) of his career during the opening half. Throughout his six years in the league, Prescott had never been so inaccurate through two quarters — finishing 5-of-14 for 75 and 0 touchdowns as the Broncos led 16-0 at half. The Broncos’ ability to create pressure and remain robust in the back end proved critical. Incredibly, Pat Surtain II, Kyle Fuller and Justin Simmons allowed just one reception combined across 101 coverage snaps.

Fangio refused to single out any specific unit on his defense, choosing to praise the entire group which pitched a shutout until the fourth quarter.

“Those guys had the right mindset, which you have to when you’re playing against an offense that is that good,” Fangio told reporters postgame. “I mean, they were ranked in the top three in damn near every category that there was. I don’t remember seeing such a good offense that was balanced like they were, watching them all week. And for us to come in here and do that, it’s just kudos to the players. They had the right mindset. They bought in to what we had to do to have a chance to slow them down, and we did more than slow them down.

“The whole team just had a tremendous mindset and it was a great team win. Our offense, we ran the ball well. We moved the ball. When you’re playing that offense, now we were doing a great job defensively. I don’t think they had many first downs in the first half when they got it, but we were getting first downs, which is critical when you’re playing a team that good.”

Confidence is now once again on the rise in Englewood after two straight victories. Broncos Country may have grown tired of the talk during their four-game losing streak. It seems coach Fangio is equally all about that action.

Life Without Von Starts With a Bang

Many concluded the Broncos were trading away their season after last Monday’s decision to deal Von Miller to the Rams but the emergence of two-sack, rookie linebacker Jonathon Cooper underlined exactly why general manager George Paton made the call.

“Your best players have to play their best games and their biggest games,” safety Justin Simmons said following the victory. “Today I just think it was a culmination of guys just stepping up. I thought Coop played great. We had moving parts all around the board. I think guys just went out there and played fast. We fed off each other’s energy.

“That was a heck of an offense we went up against. They run the ball really well, Dak is having an amazing year throwing the football to amazing talents he has at the skill positions. When it comes down to it week in and week out, we have to make the plays that come to us. Today we made those plays. I think it really speaks to the guys in the locker room, you handle the trade with Von one way or another. And I think you saw today how guys responded. That is the standard.”

Judging by the performance their performance in Dallas, Denver’s best is good enough to beat anyone. Their worst? Well, we’ve seen how that turns out. Hello, Las Vegas.

So where exactly is the bar situated for a team which embarrassed the NFL’s No. 1 offense?

We’ll certainly know more when the 3-6 Eagles come to town next Sunday.

VAR to stamp out ‘streetwise’ Premier League penalties in 21/22

F1: Lewis Hamilton Plays Down Blow of Another Loss to Max Verstappen

The right stripes: Inject some fun into your wardrobe with this summer’s biggest trend