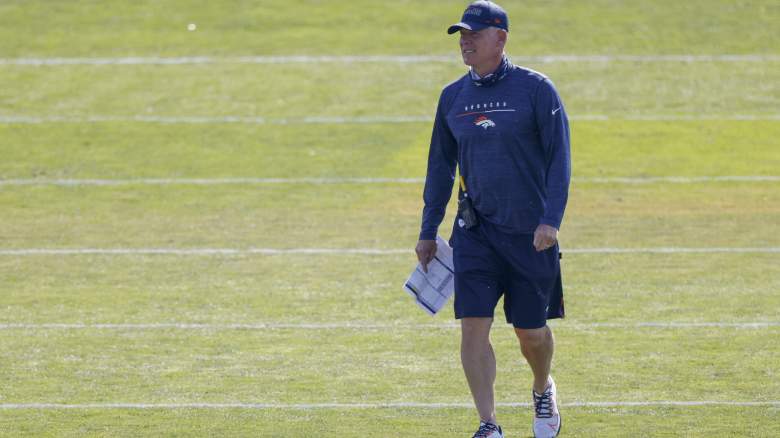 Offensive Coordinator Pat Shurmur of the Denver Broncos walks on the field during a training session at UCHealth Training Center on August 18, 2020 in Englewood, Colorado.

Denver Broncos‘ offensive play-caller Pat Shurmur has come under fire after the Broncos’ once again failed to generate much against an AFC North opponent.

Slow starts have become a constant in the young season, evidenced by three points in their last two first-quarters. Beyond that, the Broncos’ are 25th in points scored during the first term. This certainly isn’t anything new for Shurmur’s offense, who ranked second-last in first-half points during the 2020 season.

Despite the doom and gloom surrounding Shurmur’s slow starting offense, the former New York Giants head coach sees scope for change, and offered an explanation as to what went wrong at Pittsburgh.

“If you look at last week’s game, on the 13th play the game, we were on the two-yard line [with a] chance to go in and score, and we get a penalty,” Shurmur told reporters. “The next play, we ran the ball and got a penalty. The next play was designed to go to Noah [Fant]. Noah was wide open, but we had a protection thing that caused the sack. We were trying to utilize Noah, and we had him for a touchdown. We were on the doorsteps of being 10-10 on the 15th play the game which would have got us a little faster start. Again, it’s just everything.

“We have a young offense. I was told today that it’s the third-youngest offense. We have some growing pains that we’ve gone through, but we’re playing better in a lot of areas. There are just some areas we have to continue to get better at. We speak to the third downs because they’re somewhat longer, but we’re 8-for-9 on fourth down. Maybe that’s what we do — get close and go for it on fourth down. That still keeps drives alive.

Shurmur understands the frustration that comes with a loss but said he and his team are focused on improving each week irrespective of the result.

The offensive coordinator was also asked about his quarterback, Teddy Bridgewater, and just how he’s seen his progress through the first five weeks of the season. While No. 5 may not make the explosive plays of his predecessor in Drew Lock, Bridgewater does keep the Broncos steady and has ensured they’ve had a shot in each game thus far.

“The thing with Teddy is when he makes a mistake, sometimes it’s just a mistake, and it’s not catastrophic,” Shurmur said. “That’s just like a second-down play where you just take a knee and make it third down. You’re better off doing that than getting the ball turned over, or getting the game twisted in some ways. That’s just part of his charm.”

Shurmur and Bridgewater will need to bring more than charm to Mile High this Sunday if they’re to avoid a .500 record and a third-straight loss to the Las Vegas Raiders.

The Umpire Who Had Frequent Run-ins With Asian Teams

Vikings’ Adam Thielen Sounds off After Cowboys Loss: ‘You Shouldn’t Be a Coach’

‘When will we get a rest? Never’ – Courtois lashes out over number of games

New Variant Hits Sports Just As They Were Nearing Normality