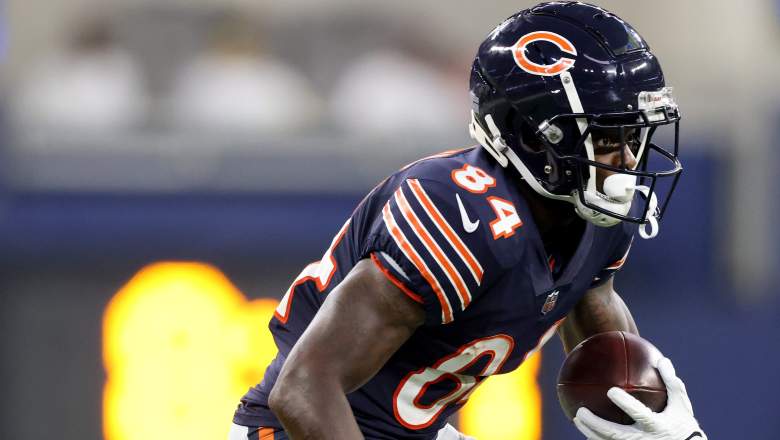 Marquise Goodwin has some telling comments after playing just one game with the Chicago Bears.

He has only been playing in Matt Nagy’s offensive scheme for a week, but Chicago Bears wide receiver Marquise Goodwin isn’t really digging what he’s seeing so far.

After the Bears were easily handled by the L.A. Rams in the season opener, losing 34-14, the team’s defense in particular was called into question for its lackluster effort. The pass rush only got home once, and the secondary was dreadful, allowing Rams quarterback Matthew Stafford a near-perfect QB rating when all was said and done.

Chicago’s offense was better than many expected in that it won the time of possession battle (35:14 to 24:46), but the Bears couldn’t muster an offensive attack beyond that consisted of much more than five-yard passes.

Running back David Montgomery had a great game, netting over 100 yards on 16 carries — but there was no effort by Bears head coach Matt Nagy, who is calling the plays, to balance out the offense with, say, a little play-action or the occasional throw downfield.

Per Next Gen Stats, Bears quarterback Andy Dalton attempted 38 passes on the night, but didn’t complete one over 10 air yards. He attempted just two passes all game over 10 yards: One resulted in a red zone interception, and the other was a 13-yard incomplete pass on a 4th-and-15. When he was asked about all the short passes, Goodwin threw some shade at Nagy’s play-calling.

Andy Dalton did not complete a pass over 10 air yards tonight (0 for 2, INT).

Since the start of 2020, the #Rams defense has allowed the fewest TDs against passes traveling over 10 air yards (4), six fewer than any other defense in that span.#CHIvsLAR | #DaBears pic.twitter.com/eeARoqBVBs

Goodwin: ‘It’s a Variable That I Have No Control Over’

The Bears added Goodwin this offseason, and he wound up being the leading receiver in the game, catching four passes for 45 yards. Does the speedy wideout feel like he was used effectively in his first game with the team?

“I feel like I got used the best way that coach wanted to use me,” Goodwin said on September 14. “I feel like it’s a variable that I have no control over, so I just focus on what I can, and that’s just being fast and catching the ball if it comes my way.”

The 30-year-old wideout was then asked what he thought about playing in an offensive attack that doesn’t stretch the field vertically, and he tossed some shade at his head coach and play-caller:

“It’s challenging, but I mean, you just got to work with what you get. I don’t control the plays that are called. I don’t control anything but just going out and doing my job, and I just do it the best that I know how: fast.”

Goodwin also added that he felt the offensive game plan going in may not have been the best in terms of equalizing Rams All-Pro cornerback Jalen Ramsey.

“He’s a unique player, All-Pro, Pro Bowler, instinctive, especially in short spaces. And us not running past 10 yards, that fell right into his hands I feel like,” Goodwin said about Ramsey.

Woof. Just one game has been played, and already, Nagy’s players are making telling comments about his offensive scheme and its design — and with good reason. The team’s quarterback had a different explanation of why he didn’t throw long at all.

“I think just the kind of way this defense plays, they limit the big play and they make you just kind of move the ball down the field,” Dalton said after the loss to the Rams. “You’re not going to get very many explosives against this team.”

No, but with all the speed Nagy talked about adding this offseason, shouldn’t they at least try for the occasional explosive play once in a while? At the very least, it’s clear players like Goodwin are ready for it.

You can watch his full interview below.

Who is in England’s T20 World Cup squad?

Patrick Bamford never stopped believing he would play for England

When is Emma Raducanu’s next match? Briton set for historic all-teenage US Open final

Is your child a fussy eater?

Searching Google is about to completely change