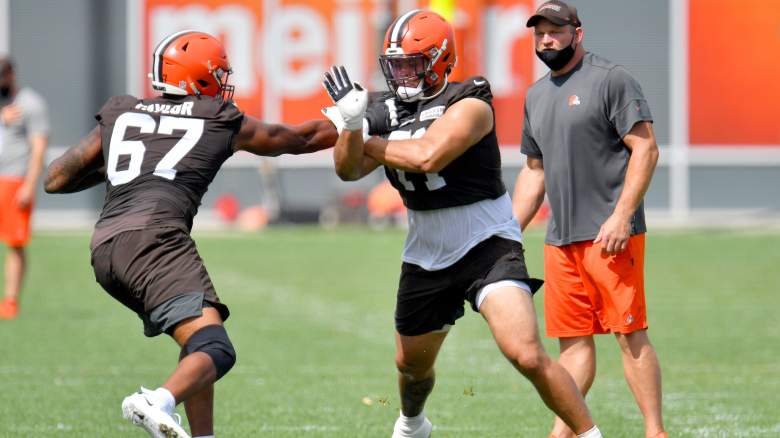 Offensive tackle Alex Taylor spent the bulk of his 2020 season with the Browns.

The Chicago Bears have just signed former Cleveland Browns offensive lineman Alex Taylor to their practice squad, the team announced September 15. Taylor was an undrafted free agent out of South Carolina State University, and he signed with Cleveland shortly after the 2020 draft.

He initially got waived with an injury designation before spending part of the 2020 season on the Browns’ practice squad. He was elevated to the team’s active roster for the last game of 2020, as well as for the Wild Card and Divisional contests, but he has yet to play a down in a regular season game. He was waived from the Browns’ injured reserve list in August after an injury designation.

The athletic Taylor played both football and basketball in high school, and that trend continued in college. His collegiate experience began at Appalachian State, where he spent the 2015 and 2016 seasons as an offensive lineman. He decided to pursue basketball for a bit after that, transferring to South Carolina State. He spent two seasons as a reserve on the basketball team, playing in just one game before switching back to football.

He immediately became a starter at tackle, where he stayed from 2018-19. The 24-year-old o-lineman is a very large human. He tips the scales at just around 300 pounds, but at 6-foot-9 Taylor is quite tall for an offensive lineman, and his athleticism is intriguing.

What Do Taylor’s Former Coaches Say About Him?

Taylor’s o-line coach at South Carolina State, Na’Shan Goddard, says the talented tackle impressed immediately, but he had to show he belonged on the gridiron before winning the starting job at tackle.

“My only question was his toughness,” Goddard told The Athletic in 2018. “Was he nasty enough?”

Then, Goddard told this story: “These are Alex’s first pass pro reps in two or three years and he was like, ‘Hell, no, hell, no, let’s go again.’ And he killed that boy,” Goddard said. “He punched him, and it knocked his helmet off and the guy fell on his back on the ground and we were like, ‘Oh, s***, this guy is going to be crazy.’”

Sounds like he would fit in just fine in Chicago, where nastiness is a huge need on the Bears’ o-line. As are healthy bodies. Right now at left tackle for the Bears, rookie Larry Borom isn’t practicing heading into Week 2, veteran Jason Peters has been limited, leaving Elijah Wilkinson taking the bulk of the snaps.

Goddard could eventually get moved up to the active roster, especially considering how difficult it is for teams to stay healthy on the line all season. If that happens, he likely won’t see the field, but his physical gifts and athleticism make him an intriguing practice squad addition.

“I saw the measurements, man,” Goddard added, in reference to Taylor’s 88-inch wingspan. “You don’t see guys that large and that athletic at the same time. Hell, that’s 3 feet of arm right there. You just punch a guy, you’ve already got him 2 feet away from your quarterback.”

READ NEXT: Bears’ Akiem Hicks Breaks Long Silence on Future With the Team

F1: Winning At Silverstone Would Be Strong Signal By Max Verstappen

Dan Lawrence targeting consistency Down Under after ‘very frustrating’ year

Nobody-Turned-ACC Player of the Year Signs With Clippers