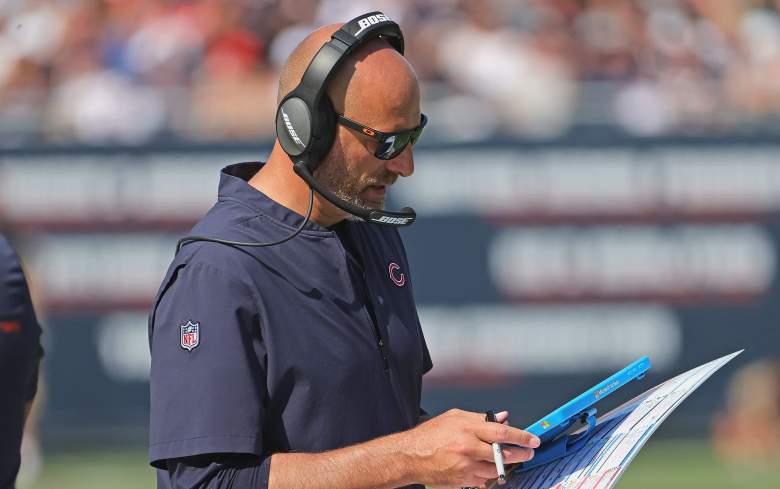 Head coach Matt Nagy is being wishy-washy about the QB situation once again.

Chicago Bears head coach Matt Nagy had two separate occasions to address who the team’s starting quarterback would be Week 3 against the Cleveland Browns, and he essentially said the same thing both times: I’m not sayin’. After veteran QB Andy Dalton went down with a knee injury in the team’s Week 2 win over the Cincinnati Bengals, rookie Justin Fields took over, and naturally, questions emerged about who would lead the team moving forward.

Fans and analysts have been clamoring for Fields to start since the young signal-caller began to impress during training camp, and while he was uneven in relief of Dalton, going 6-13 for 60 yards and a pick, many are still wondering if Fields will be the guy moving forward. Nagy was asked about the severity of Dalton’s injury, and he was also asked — twice in two days — whether Dalton would be the starter if healthy. Both times, the Bears coach refused to give a definitive answer. Then, he had a sudden change of heart. Or something.

The Bears coach had another opportunity to clarify things Monday morning, but he didn’t. “As far as the quarterback situation with Andy, he’s still working through all his results right now and going through that, so we’ll know more later on tonight,” Nagy said on September 20, adding: “I appreciate his toughness and I thought he was playing really well. He took us down there on that first drive for a touchdown, came back out, put together another little drive with some scrambles. He was throwing the ball well. He looked good, and then, unfortunately, that happened.”

Then, the following exchange occurred between Brad Biggs of The Chicago Tribune and Nagy:

In the background, Biggs can be heard saying, “Personnel, maybe, but not scheme.”

Then, about 10 minutes after his meeting with the media September 20, this happened:

We have a clarification from Matt Nagy that just came from #Bears PR: Andy Dalton is still the starter if he is healthy.

The NFL Network’s Ian Rapoport confirmed on September 20 that an MRI revealed that Dalton suffered a bone bruise in his knee.

Sources: #Bears QB Andy Dalton had his MRI and it confirmed a bone bruise in his knee. No official determination has been made about his status this week.

While Nagy may be adamant in public that Dalton will remain the starter if he’s healthy, “if” is the key word there. Dr. David J. Chao — aka the Pro Football Doc — revealed that based on the video footage he has seen of the injury, Dalton should miss several weeks — maybe longer. Chao says it’s “Justin Fields” time for the Bears, regardless of what Nagy is saying via the team’s PR squad.

This means Fields will start Week 3 against Cleveland barring a physical miracle from Dalton. But at 33-years-old, the veteran QB likely isn’t going to be healing within the week.

You can watch the video of Nagy’s September 20 interview with the media below:

‘The Most Fabulous Country’: Kevin Pietersen Thanks India For Supporting African Countries in Dealing With Omicron Covid Variant

Is Brazil vs Spain on TV today? Kick-off time, channel and how to watch

The Cop Fired for Supporting Rittenhouse Wants His Job Back. What Would You Do?

The Delta Variant Peaks: Is This The End Of The Road For Travel?