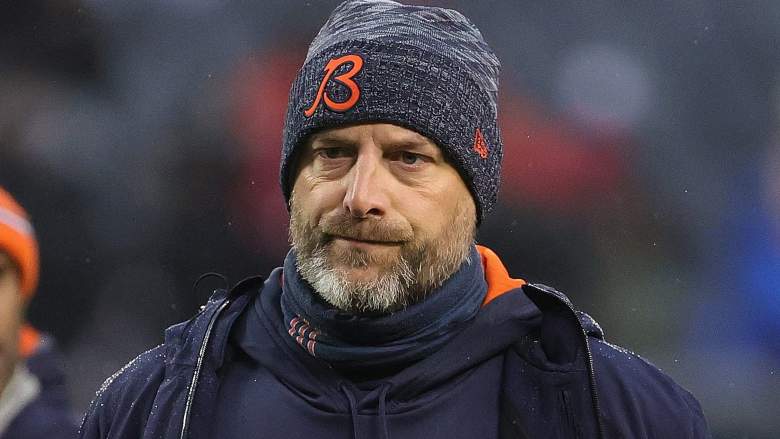 Head coach Matt Nagy of the Chicago Bears has been on the hot seat all year.

Chicago Bears head coach Matt Nagy’s job is about as secure as a wide open Brinks truck, and one top insider covering the team thinks Chicago’s upcoming Week 14 matchup against the Green Bay Packers could be the most important game of Nagy’s career.

In his December 6 column, Insider Adam Hoge of NBC Sports said the team’s Sunday night game against Aaron Rodgers and company feels like a “do or die” moment for the fourth year head coach. He also went all in on Bears chairman George McCaskey and president/CEO Ted Phillips.

Hoge: Nagy Needs to Beat Green Bay, But Even That May Not Help

Noting that two of Nagy’s predecessors (Marc Trestman and John Fox) virtually had their respective fates sealed after ugly losses to the Packers, Hoge is under the impression things could be slightly different for Nagy. While both Fox and Trestman were fired at the end of the regular season, Hoge seems to think Nagy could get his walking papers sooner than that if the Bears lay another egg against their longtime rivals.

“Sunday’s game at Lambeau isn’t just the most important game for Matt Nagy because it’s the next game on the schedule,” Hoge wrote on December 6. “It might as well be the only game left on the schedule. And it might be. Maybe the Bears come to play and pull off a dramatic upset on national television. But if it goes the other way — the way it usually goes against the Packers — you have to wonder if a change could be made as soon as next week.”

This is just Hoge’s opinion, but he’s very dialed in to the team, and considering Nagy is 1-6 in his four seasons against Green Bay and rumors have been flying for months he could be fired at any time, this Week 14 contest in particular is worth keeping an eye on. Regardless of the results against Green Bay, Nagy feels like he’s a goner.

Hoge also made a solid point about the record Green Bay has amassed under the tenure of both McCaskey and Phillips:

It’s looking as though a lot is riding on this game, and while there likely won’t be many changes when it comes to management, beating the Packers is supposed to matter to the Bears franchise. If they lose to Rodgers yet again, someone should be held accountable — and as Hoge noted, this starts at the top. They only question remaining is whether or not the franchise has the temerity to make actual change.

Have to Work a Lot in Terms of Our Bowling, Says Mithali Raj

Rory McIlroy: Players want to know where they stand amid golf’s power struggle

No evidence Joey Barton was ‘someone in a rage’, jury told