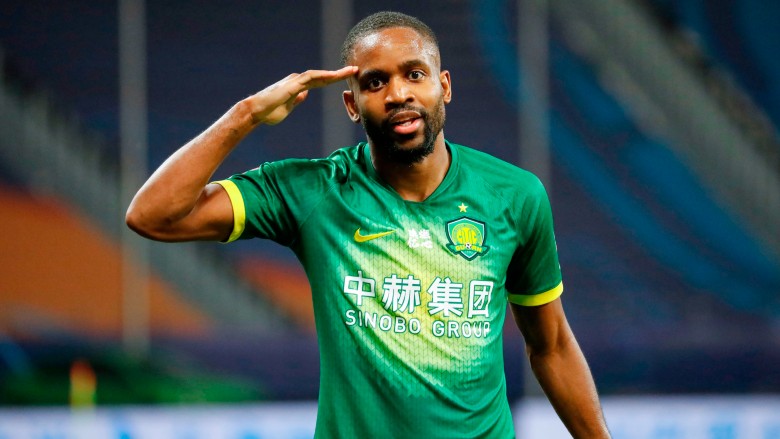 Barcelona are considering bringing Congolese striker Cedric Bakambu to the Camp Nou in the January transfer window on a free transfer to replace striker Sergio Aguero who has been ruled out for three months after cardiac exams.

Bakambu currently plays in China with Beijing Guoan but is out of contract on January 1 and available as a free agent, according to Manu Sainz at Diario AS. The 30-year-old is seen as a “very strong option” for the Catalan giants.

Barcelona considered signing Bakambu in the summer but would have had to pay a transfer fee and so moved to bring in Luuk de Jong on loan from Sevilla instead. Bakambu has been in China since 2018 but has plenty of La Liga experience after spending three years with Villarreal.

Meanwhile, De Jong could leave Barcelona in January after falling out of favor since compatriot Ronald Koeman was sacked. New coach Xavi “does not want” De Jong and so Barcelona “will try and send him away in January,” as reported by Diario Sport.

Xavi has plenty of attacking problems to contend with ahead of his first game in charge of Barcelona on November 20 against Espanyol. Ansu Fati has a thigh injury and has joined Aguero on the injured list, while Ousmane Dembele is out also with a hamstring problem.

Bakambu Almost Signed For Barcelona In 2020

Barcelona’s interest in Bakambu is nothing new. The Catalan giants also almost signed the striker in January 2020. Bakambu was actually on his way to the Camp Nou from China when he found out the club had pulled the plug on the deal.

Fortunately, the striker managed to see the funny side of things and put out a post on Twitter to explain how he had very nearly been playing with Antoine Griezmann and Lionel Messi at the Camp Nou.

Bakambu is an experienced international who has also played in Turkey with Bursaspor and in France at Sochaux. The forward has a strong scoring record at Beijing Gouna with 58 goals in 87 games, while he netted 47 times in La Liga with Villarreal from 105 appearances.

Barcelona’s financial problems have been well documented which will make signings tricky in January, although president Joan Laporta has claimed the Catalan giants could sign three players in the next window.

It still remains to be seen when Aguero will play for Barcelona again. The Argentine was hospitalized after being substituted in the first half of the team’s 1-1 draw at home to Alaves in La Liga.

Aguero reported chest discomfort during the game and was then admitted to hospital. Barca confirmed after the match the striker would be evaluated and miss the next three months of action.

The 34-year-old has since been released from hospital and has sent a message to fans to thank them for their support during what’s been a difficult time.

The loss of Aguero added to injury concerns over Fati and Dembele and the failure of De Jong to impress at Barcelona means it would be no surprise to see the Catalans try to add some more attacking firepower in the January window.

Finances are obviously an issue which means free agents and loan deals are likely to be under consideration by the Catalan giants in the run-up to the window which opens across Europe on January 1.

READ NEXT: Xavi Reveals First Thing He Will Do As Barcelona Boss

Discover more from Heavy on Barcelona↓

Unlock the latest Barcelona news, rumors and exclusives — direct to your inbox. ↓

On this day in 2017: England hammer West Indies in first day-night Test

Throughout history, clocks have rarely been just a matter of time

Bhoomi Trivedi opens up on her Garba song ‘Garbe Ki Raat’ controversy: Religious folk songs should not be insulted – Times of India

Digital tech is the future, but new report shows Australia risks being left in the past