Backlash Builds as Kadarius Toney Doubles Down on Controversial Tweet 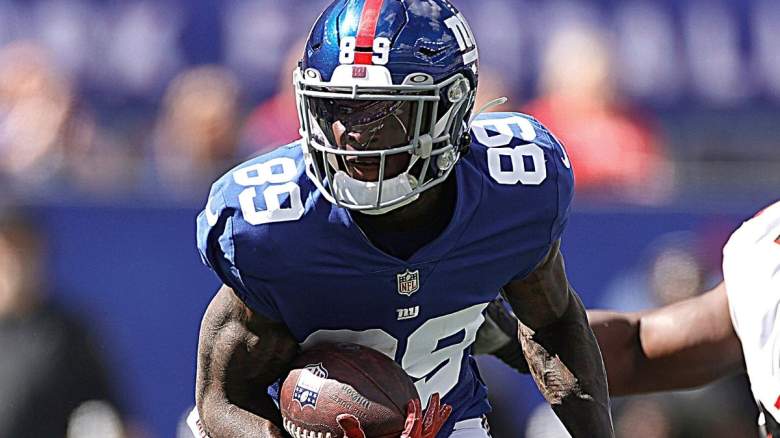 On Wednesday, November 10th, Kadarius Toney met with reporters, where the New York Giants wide receiver showed no remorse for his controversial tweets last week regarding the Henry Ruggs situation.

“Like I said, pray for the families involved. How could you regret having empathy for both sides? I don’t really get it,” said Toney.

When further pressed with questions regarding the matter, Toney responded, “Like I just said, pray for the families involved. Why are you drilling the same question? I’m not going to answer that.”

Here’s the remainder of the transcript, via Giants.com:

Q: Just going back to the tweet you posted about Henry Ruggs, why did you think it was, ‘goofy,’ for people to publicly criticize someone who drove 150 miles per hour and killed somebody?

A: Like I said, pray for the families involved.

Q: Is there anything you want to clarify about your tweet or your intentions behind it?

A: Pray for the families. That was clearly stated in there. I don’t know how everything else came about. Take it how you want it.

Q: You said you thought it was, ‘goofy,’ that people were publicly criticizing Henry. Why did you think that?

A: Were they praying for the families? You’re making all these faces. What do you mean?

Joe Judge spoke with Kadarius Toney about his tweet regarding Henry Ruggs III. Does Toney regret the tweet?

“Like I said, pray for the families involved. How could you regret having empathy for both sides? I don’t really get it” pic.twitter.com/ybCjHpAhI4

Toney originally came under scrutiny for seemingly attempting to show support for all parties involved in the horrific crash that led to the death of one 23-year-old woman and her dog on the morning of November 2nd.

“We young…..everybody make mistakes….y’all lookin at the situation like ‘this or that’ kuz it ain’t y’all…having so much too say….he know he messed up don’t drag em for it……that’s goofy to me….just pray for the families involved,” Toney tweeted, one day after the accident.

Toney’s take led to mounds of backlash from numerous angles, including from ESPN analyst and two-time Super Bowl champion, Damien Woody, who called out Toney and other “youngins [who] don’t believe in accountability.”

Toney clearly didn’t take too kindly to Woody’s response, sending off a flurry of tweets shortly after: “Tough talkin don’t faze me…….gangsta” he wrote in a since-deleted tweeted, and “I was Trippin…i forgot They wait until you fail to unleash how they really been feeling” — the latter tweet remains live.

With the rookie opting to double-down on his take on Wednesday, so have his retractors.

Head coach Joe Judge addressed the initial matter regarding Toney with reporters on November 4th, going to bat for the Alabama native. Judge supported Toney’s message but noted that his delivery could have been improved:

I talked to Kadarius. It’s important that we understand how we articulate our words and put them out there. Ultimately, our prayers are with everybody. This is a situation no one wants to see happen to anybody. No one wants to be in this situation. While no one is in any way, shape or form dismissing the consequences at all, it’s horrible on both sides. It’s absolutely horrible. As some players on the Raiders and Derek Carr have voiced, as well, it’s a terrible incident. You’ve just got to make sure that you still have prayers for everybody involved. The important thing is we articulate our words and we watch what we say at the same time.

The latest Giants news straight to your inbox! Subscribe to the Heavy on Giants newsletter here!

As far as things pertain to Toney on the football field, he told reporters he’s feeling “pretty good” and that he’s “just looking forward to the rest of the season right now,” after dealing with a thumb injury.

Toney hauled in his lone target for nine yards in Big Blue’s Week 9 upset victory over the Las Vegas Raiders. Since his breakout 10 reception, 189-yard performance in Week 5, Toney has amassed a total of just 71 yards on eight catches. The Florida product also has yet to find the endzone thus far in his rookie campaign.

The Giants are on a bye this week. They’ll return to action on November 22nd for a Monday night clash against the defending Super Bowl champion Tampa Bay Buccaneers in Week 11.

Discover more from Heavy on Giants↓

India vs New Zealand 2021: ‘We Need Him When Rishabh Pant is Not Available’-Vikram Rathour On ‘Team Man’ Wriddhiman Saha

Verstappen is lucky to have six years of experience behind first world title chance, says Hamilton

Where Was ‘An Unexpected Christmas’ Filmed? See Cast Stories

Budget 2021 calculator: What does it mean for you