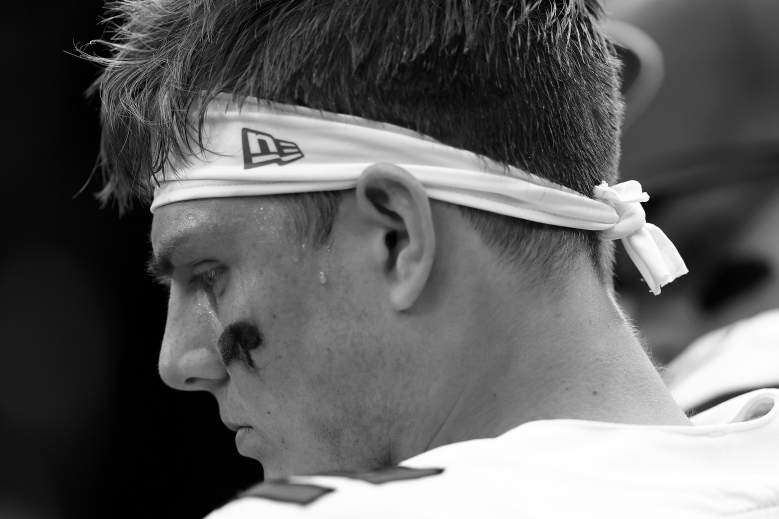 New York Jets rookie quarterback Zach Wilson looking off into the distance before an NFL game.

The New York Jets are ready to hit the reset button after a tough 1-4 start to the season.

Renewed and refreshed coming off of the bye week, there have to be some changes to turn this thing around.

Although one analyst had a very polarizing take on what the green and white should do next.

One change that analyst Andrew Buller-Russ of Sportsnaut would like to see is the benching of Zach Wilson.

There is no question that the youngster has struggled through the first six weeks of the NFL season:

“At 1-4, Gang Green won’t be competing for the playoffs this season,” Buller-Russ explained. “While it’s hard to argue against pulling the player they selected second overall just months ago, it might serve Wilson well to learn from the bench for a bit. In fact, the Jets’ signal-caller is on pace to break Peyton Manning’s record for the most interceptions by a rookie quarterback in NFL history (28).”

There was a lot of criticism in the lead-up to the 2021 NFL draft that Wilson couldn’t make the jump from BYU to the NFL level.

Although despite that chatter, the Jets didn’t seem worried about it and selected the 22-year old gunslinger No. 2 overall. They then doubled down on their bet by making his primary backup Mike White, an inexperienced journeyman.

Okay, an analyst wants the Jets to bench Wilson, the natural follow-up question is who will replace him?

Josh Johnson or maybe the aforementioned White? That would be an epic disaster.

Actually, Sportsnaut suggested the green and white should go outside the organization to add an experienced backup to the squad:

“Having someone like Cam Newton offers a chance to see how the offense operates with a veteran under center while protecting their young quarterback from any further embarrassment. It also wouldn’t hurt to have a more capable backup.”

Ahead of final roster cuts the New England Patriots stunned the NFL when they released Newton. Over the weekend the veteran announced that he had been vaccinated for COVID-19, which could have been a possible hold up with joining a new team.

On his YouTube channel, Newton explained he has received multiple offers from NFL teams but he is waiting for the right opportunity.

While there is no debate, the former league MVP is arguably the best dual-threat quarterback of all time, his fit with the Jets simply doesn’t make sense.

First off the Jets had 1,000 chances at adding a veteran quarterback back in March, during the summer months, during training camp, and every time they passed. Why would they change their tune and add one in the middle of October?

Secondly, Newton revealed when he was initially released by the Pats that it was because “he was going to be a distraction.” Why would the green and white want that in their locker room?

The Jets need to ignore the outside noise, continue to ride the Wilson train, and let him learn from his mistakes. They didn’t draft the former BYU star for 2021, they drafted him for the long term.

Of course, there are going to be trials and tribulations, he’s a rookie for pete’s sake, but it isn’t time to hit the eject button. These lessons Wilson learns in his first year will be invaluable for his development.

READ NEXT: 1 Trade That Could Completely Open up the Jets Offense

We Were Guilty of Not Winning the Match: Igor Stimac after Draw vs Bangladesh in SAFF Championship

Restaurants where staff are bullied should be stripped of Michelin stars, union says