Scientists have created the ‘world’s largest family tree’ that links around 27 million people around the world – both living and dead.

Developed at the University of Oxford, the new genealogical network reveals how individuals across the world are related to each other in ‘unprecedented detail’.

Taking the form of a scientific method, research paper and video, it effectively goes back in time to show where human populations lived, and when.

The very earliest ancestors, which pre-date Homo sapiens, trace back in time to a geographic location that is in modern Sudan, likely over one million years ago.

This image visualises inferred human ancestral lineages over time and space. Each line represents an ancestor-descendant relationship in our ‘inferred genealogy of modern and ancient genomes’. The width of a line corresponds to how many times the relationship is observed, and lines are coloured on the basis of the estimated age of the ancestor

WHAT IS A GENOME?

Your genome is the instructions for making and maintaining you. It is written in a chemical code called DNA. All living things – plants, bacteria, viruses and animals – have a genome.

Your genome is all 3.2 billion letters of your DNA. It contains around 20,000 genes.

Genes are the instructions for making the proteins our bodies are built of – from the keratin in hair and fingernails to the antibody proteins that fight infection.

The project has been published today in the journal Science by researchers from the University of Oxford’s Big Data Institute.

‘We have basically built a huge family tree, a genealogy for all of humanity that models as exactly as we can the history that generated all the genetic variation we find in humans today,’ said study author and evolutionary geneticist Dr Yan Wong.

‘This genealogy allows us to see how every person’s genetic sequence relates to every other, along all the points of the genome.

‘While humans are the focus of this study, the method is valid for most living things; from orangutans to bacteria. It could be particularly beneficial in medical genetics, in separating out true associations between genetic regions and diseases from spurious connections arising from our shared ancestral history.’

The past two decades have seen extraordinary advancements in human genetic research, generating genomic data for hundreds of thousands of individuals, including from thousands of prehistoric people.

This raises the possibility of tracing the origins of human genetic diversity to produce a complete map of how individuals across the world are related to each other, according to the team. 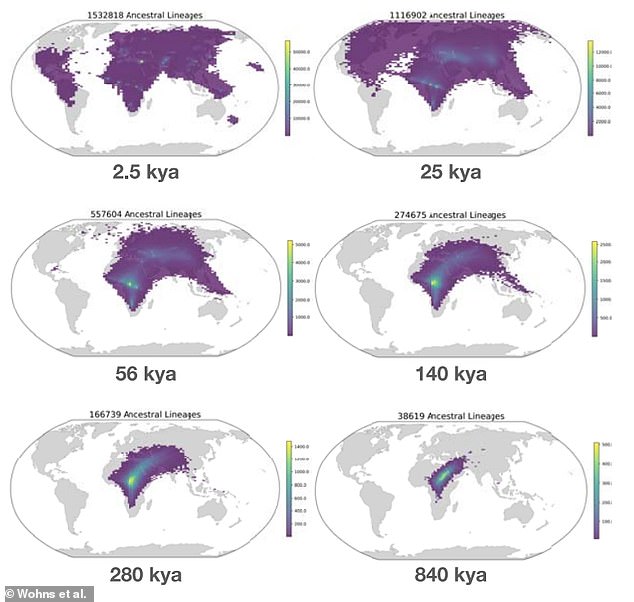 Two-dimensional histograms showing the geographical location of ancestral lineages at six time points. 1 kya is an abbreviation for a thousand years ago

Since individual genomic regions are only inherited from one parent, either the mother or the father, the ancestry of each point on the genome can be thought of as a tree.

The set of trees, known as a ‘tree sequence’ or ‘ancestral recombination graph’, links genetic regions back through time to ancestors where the genetic variation first appeared.

Until now, researchers struggled to work out a way to combine genome sequences from many different databases and developing algorithms to handle data of this size.

However, the new method can easily combine data from multiple sources and scale to accommodate millions of genome sequences.

The study integrated data on modern and ancient human genomes from eight different databases and included a total of 3,609 individual genome sequences from 215 populations.

The ancient genomes included samples found across the world with ages ranging from 1,000s to over 100,000 years.

‘Essentially, we are reconstructing the genomes of our ancestors and using them to form a vast network of relationships,’ said lead author Dr Anthony Wilder Wohns, now a postdoctoral researcher at the Broad Institute of MIT and Harvard.

‘We can then estimate when and where these ancestors lived. The power of our approach is that it makes very few assumptions about the underlying data and can also include both modern and ancient DNA samples.’ 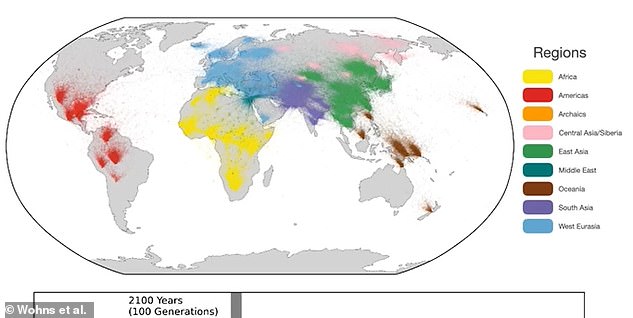 Around 2,000 years ago, humans were well spread around the globe, save for much of North America, Oceania and other locations 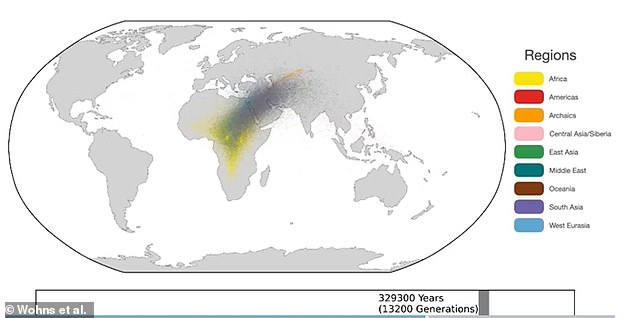 But more than 300,000 years ago, humans were more centred in Africa, the animation shows

The algorithms predicted where common ancestors must be present in the evolutionary trees to explain the patterns of genetic variation. The resulting network contained almost 27 million ancestors.

After adding location data on these sample genomes, the authors used the network to estimate where the predicted common ancestors had lived.

The results successfully recaptured key events in human evolutionary history, including the migration out of Africa.

The very earliest ancestors the team identified were ‘very likely’ Homo erectus, an extinct species of archaic human, that trace back in time to a geographic location that is in modern Sudan.

Dr Yan Wong and Dr Wohns said in a joint statement: ‘These ancestors lived up to and over one million years ago – which is much older than current estimates for the age of modern humans (c. 250,000 to 300,000 years ago) – so bits our of genome have been inherited from individuals that we wouldn’t recognise as modern humans, but who most likely lived in northeast Africa.

‘It’s very likely that these very old ancestors were Homo erectus, but we cannot be sure of their identity or of their location without extremely ancient DNA.

‘One important conclusion from our work is that the people we often label as representing “the cradle of humanity” themselves had ancestors further back in time, whose descendants are still among us today.’

WHAT DO WE KNOW ABOUT HUMANKIND’S JOURNEY OUT OF AFRICA?

The traditional ‘Out of Africa’ model suggests that modern humans evolved in Africa and then left in a single wave around 60,000 years ago.

The model often holds once modern humans left the continent, a brief period of interbreeding with Neanderthals occurred.

This explains why individuals of European and Asian heritage today still have ancient human DNA.

There are many theories as to what drove the downfall of the Neanderthals.

Experts have suggested that early humans may have carried tropical diseases with them from Africa that wiped out their ape-like cousins.

Others claim that plummeting temperatures due to climate change wiped out the Neanderthals.

The predominant theory is that early humans killed off the Neanderthal through competition for food and habitat.

How the story is changing in light of new research

Recent findings suggest that the ‘Out of Africa’ theory does not tell the full story of our ancestors.

Instead, multiple, smaller movements of humans out of Africa beginning 120,000 years ago were then followed by a major migration 60,000 years ago.

Most of our DNA is made up of this latter group, but the earlier migrations, also known as ‘dispersals’, are still evident.

This explains recent studies of early human remains which have been found in the far reaches of Asia dating back further than 60,000 years.

For example, H. sapiens remains have been found at multiple sites in southern and central China that have been dated to between 70,000 and 120,000 years ago.

Other recent finds show that modern humans reached Southeast Asia and Australia prior to 60,000 years ago.

Based on these studies, humans could not have come in a single wave from Africa around this time, studies have found.

Instead, the origin of man suggests that modern humans developed in multiple regions around the world.

The theory claims that groups of a pre-human ancestors made their way out of Africa and spread across parts of Europe and the Middle East.

From here the species developed into modern humans in several places at once.

The argument is by a new analysis of a 260,000-year-old skull found in Dali County in China’s Shaanxi Province.

The skull suggests that early humans migrated to Asia, where they evolved modern human traits and then moved back to Africa.

Infant stars identified at the center of our galaxy

Motorized droplets thanks to feedback effects

Who is Panda on The Masked Singer?

IPL 2022: ‘We Stuck With Mukesh And We Reaped the Rewards’-Stephen Fleming