Scientist reveals the formula for the perfect chip butty

It’s a beloved snack that’s been enjoyed in Britain for over a century – now, a scientist has finally come up with the formula for the perfect chip butty.

According to the findings, a faultless butty has 12 thick cut chips, two 40g slices of medium sliced white bread, ketchup and butter – not mayo or margarine.

According to the study, the perfect chip butty has 12 thick cut chips, two 40g slices of medium sliced white bread, ketchup and butter – not margarine 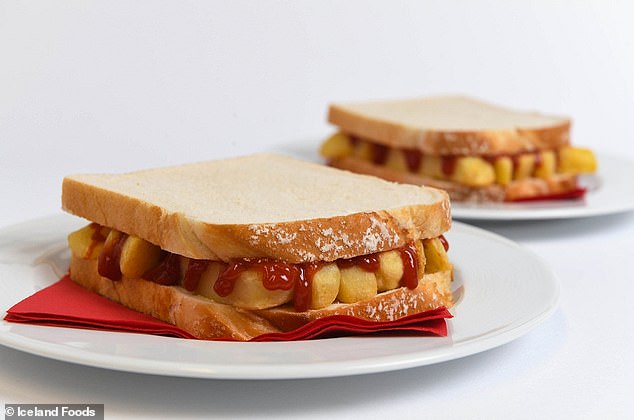 An Iceland spokesperson said: ‘The Chip Butty is one of the greatest culinary inventions in UK history’

HOW TO CREATE THE PERFECT CHIP BUTTY

The scientist’s step-by-step guide to creating the perfect butty is:

3. While the chips are freshly cooked, place at least 12 on one slice of buttered bread so that their weight is three quarters that of the bread plus ketchup

4. Squeeze as much ketchup as you like but add more chips to compensate so it doesn’t get too cold

5. Place the second slice of bread on top of the still steaming hot chips

‘What makes white bread preferable is that it is usually the softest,’ Dr Hind said.

‘This makes it a perfect contrast to the crunchy chips. And sliced bread has a constant thickness, giving a more consistent chip butty.

‘But every type of bread and style of chip varies subtly, so I’d encourage people to experiment at home and devise their own perfect formula.

‘Personally, I much prefer brown sauce and you can substitute it for ketchup in the equation as you like.

‘One thing my formula ignores is salt. That’s a matter of personal taste – and personal health – and so that’s a great place for people to start their own experiments!’

Dr Hind developed his formula based on survey findings from 2,000 Brits as to how they most commonly create a chip butty.

The academic then experimented around the most popular methods with timings, temperatures and, crucially, portion sizes to refine his recipe.

The survey for Iceland found that the bread for a butty must be a sliced white loaf, preferred by over half (52 per cent) of respondents.

In terms of the less popular bread options, just 14 per cent said they favour a soft bread roll; 9 per cent a bap; and 8 per cent sliced brown bread. 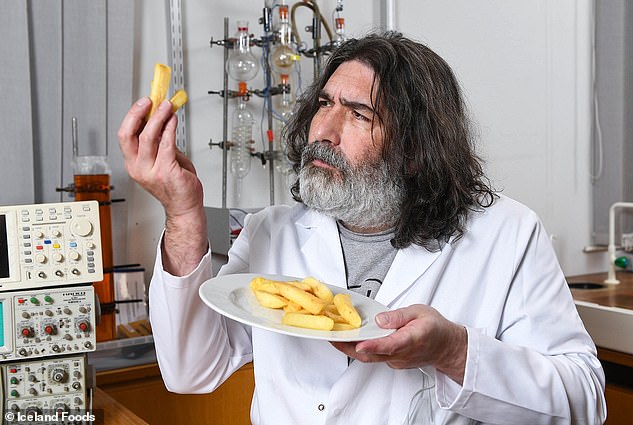 Dr James Hind (pictured), a statistician from Nottingham Trent University, refined a recipe based on the eating habits of 2,000 Brits

HISTORY OF THE CHIP BUTTY

According to Professor Rebecca Earle, a food historian at the University of Warwick, the chip butty – also known as a chip barm – has a mysterious history, although it’s said to have originated up north in the 1800s.

According to Historic UK, what’s thought to be the first British fish and chip shop – Mr Lees in Mossely, near Oldham, Lancashire – opened around 1863.

However, it’s unclear whether chips between bread were sold at this particular establishment.

‘I can’t verify the 1863 story but it makes sense that people were putting chips into bread before the 1960s,’ Professor Earle told MailOnline.

It should be a medium sliced loaf – preferred by 49 per cent – rather than thick sliced (26 per cent) or thin sliced (7 per cent).

The bread must be buttered (65 per cent) rather than relying on margarine (23 per cent) or any other spread. 64 per cent said a thin layer of butter is best.

The chips should be thick cut (46 per cent) like those from the local chippy rather than standard oven chips (33 per cent) or skinny French fries (11 per cent).

Brits most commonly choose to use only seven or eight chips (37 per cent) in their butty.

However, after experimenting, Dr Hind concluded this is far too few – and has instead proposed 12 as the perfect number.

So a layer of 12 chips weighing around 60g should go between two medium slices of white bread, each weighing 40g.

Any fewer chips and there may not be enough to melt the butter, which is required to soften the bread and create a tasty contrast to the crispiness of chips.

Too many chips and it will be awkward to eat the butty and every mouthful will seem like it is almost all chips with the bread and butter going largely unnoticed, Dr Hind concluded.

As for the finishing touches, ketchup is the most popular condiment to add to a butty (49 per cent, followed by mayonnaise or vinegar (each 17 per cent).

According to the results, 73 per cent of respondents also agreed with Dr Hind that making the perfect chip butty is an ‘exact science’.

An Iceland spokesperson said: ‘The Chip Butty is one of the greatest culinary inventions in UK history.

‘We felt it our duty to ensure the British public know the optimum way to build their crispy potato sandwich.’ 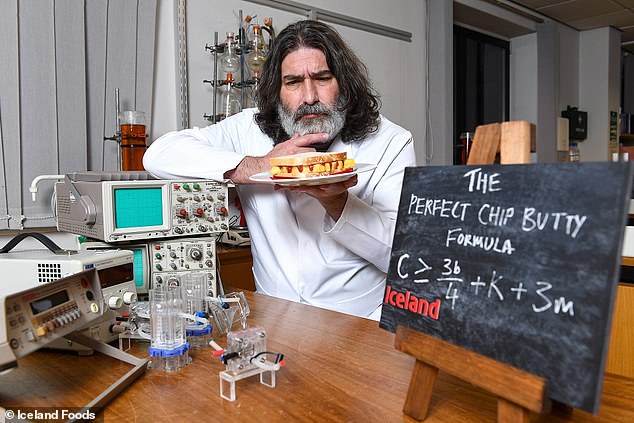 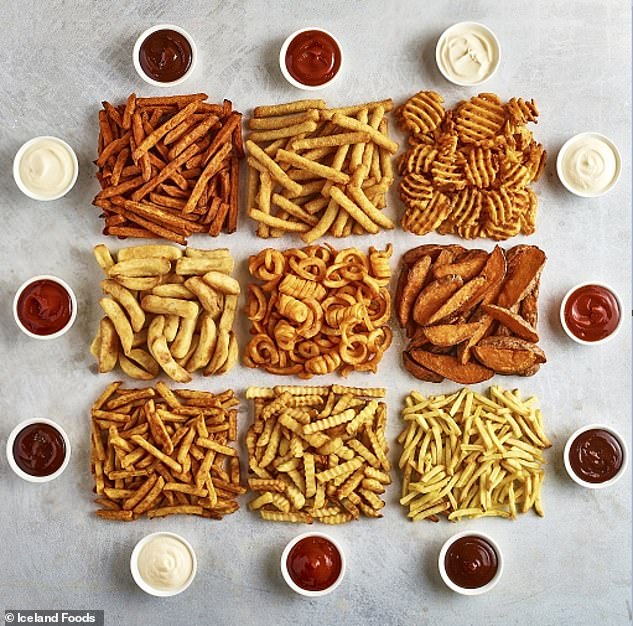 Skinny, curly, crinkled, waffled, crumbed or wedges? According to the findings, none of these will do for the perfect chip butty – only thick cut

According to Professor Rebecca Earle, a food historian at the University of Warwick, the chip butty – also known as a chip barm – has a mysterious history, although it’s said to have originated up north in the 1800s.

Professor Earle also said a study to determine a scientific formula for a perfect chip butty is ‘doomed to failure’ because of personal taste.

‘It’s a highly subjective matter, dependent on both individual preference and national trends,’ she told MailOnline.

‘For example, the British I think generally favour “wetter” sandwiches, with more sauce, compared to the US market.

‘Pret A Manger, I think, had to reformulate their sandwich fillings with less mayo when they launched in the US, if I recall.’

A TENNER FOR FISH AND CHIPS! AVERAGE PRICE OF BRITISH CLASSIC COULD TOP £10 DUE TO SOARING COST OF COD AND MUSHY PEAS

The average price of fish and chips could increase to more than £10 due to the soaring costs of cod and mushy peas, according to industry chiefs.

The National Federation of Fish Friers has warned that cod supplies have become 75 per cent more expensive than in October.

The cost of buying mushy peas has also doubled, the industry body said, while shops are suffering from soaring packaging prices and energy bills, The Mirror reported.

On top of this, there will also be a return to 20 per cent VAT from April.

Andrew Crook, the president of the National Federation of Fish Friers, said the cost of cod for his shop Skipper’s in Euxton, Lancashire, has soared from £8 per kilogram to nearly £14. 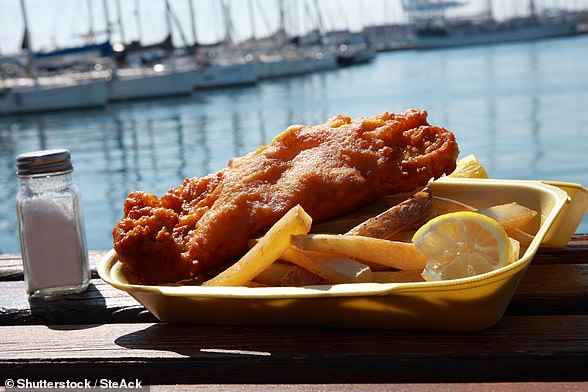 Andrew Crook, the president of the National Federation of Fish Friers, said the cost of cod for his shop Skipper’s in Euxton has soared from £8 per kilogram to nearly £14 (stock image)

The average cost for a portion of fish and chips currently stands at £6.50 to £9, while Mr Crook said he currently charges £7.50 for the British classic at Skipper’s.

But he told The Mirror: ‘It could soon be over £10 and others are likely to do the same.

‘Rising costs are really putting us under pressure and will push some out of business.’

David Miller, who runs a chippy in Haxby, North Yorkshire, said the dish has been underpriced for too long, adding that shops have a ‘tsunami of costs coming’.

Shop owners are also having to battle with smaller catches and a rise in global demand, both of which are leading to price hikes.

Britons are already facing an impending cost of living crisis due mainly to spiralling gas prices.

What time is the Perseid meteor shower tonight?

A Gene-Tweaked Jellyfish Offers a Glimpse at Other Minds

Researchers resurrect and improve a technique for detecting transistor defects: A traditional method gets a new lease on life and may provide a new...

A spacecraft has ‘touched’ the sun for the first time

Eyewitness evidence is more reliable than has been thought

What will 2022 bring in the way of misinformation on social media? 3 experts weigh in

US Open prize money: How much does the winner earn?

Lewandowski Lacks a Ball to Go With His Boots