By Chris Ciaccia For Dailymail.Com

Paleontologists have discovered a 290 million-year-old fossil in Utah that likely belonged to an ‘early reptile relative’ and could wind up being an entirely new species.

The discovery, made last month at Utah’s Canyonlands National Park, is a ‘rare’ example of a Permian-aged skeleton, said paleontologists at Arizona‘s Petrified Forest National Park, who worked on the team that was part of the discovery.

The fossilized specimen was found in the bottom of a slickrock wash that was threatened by erosion by rainstorm that previously hit the canyon.

‘It’s roughly the size of an iguana and (the fossil) preserves at least the vertebrae, top of the skull, and some of the shoulder girdle and forelimb,’ Adam Marsh, lead paleontologist at Petrified Forest National Park, said in comments obtained by the Charlotte Observer.

‘We’re preparing the fossil at Petrified Forest and it will eventually get CT scanned in the next year.’ 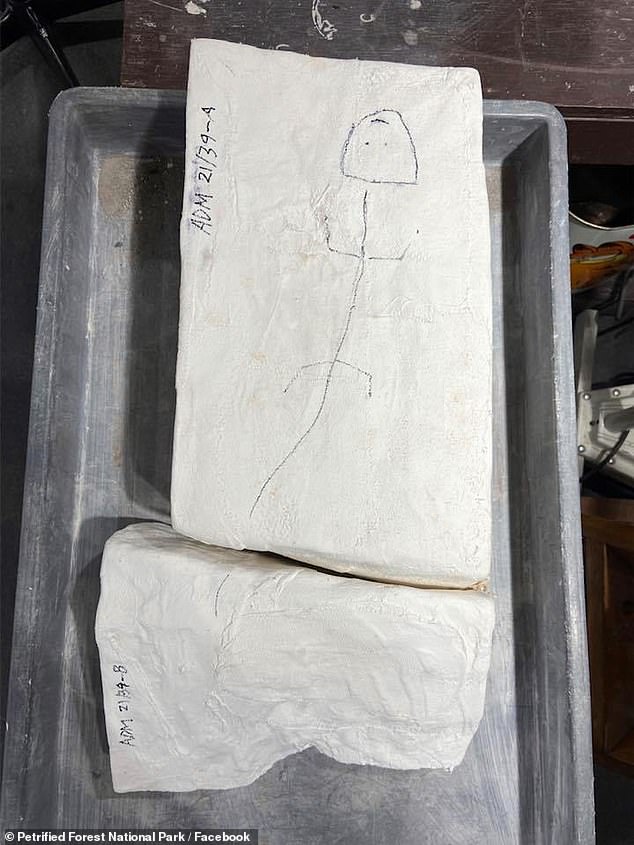 The stone that enveloped the fossil was taken out of the ground in two chunks, using a concrete saw, hammer and chisels 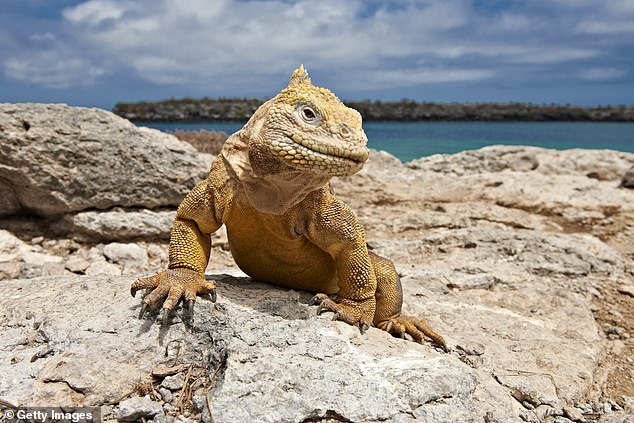 The fossil is roughly the size of an iguana and it has the creatures vertebrae, top of the skull, some of the shoulder girdle and forelimb

‘The team held a permit to collect the fossil and determine its place within the Cedar Mesa Sandstone at CANY to estimate its geologic age and context,’ Petrified Forest National Park wrote in a Facebook post.

The discovery was made after a ’13 mile round trip hike,’ Petrified Forest National Park added in the Facebook post.

The stone that enveloped the fossil was taken out of the ground in two chunks, using a concrete saw, hammer and chisels, Marsh added. 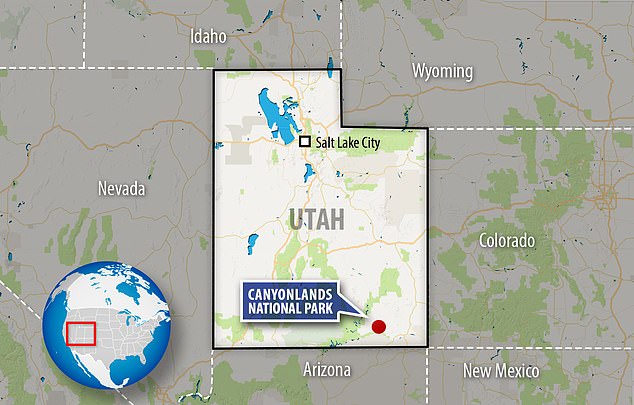 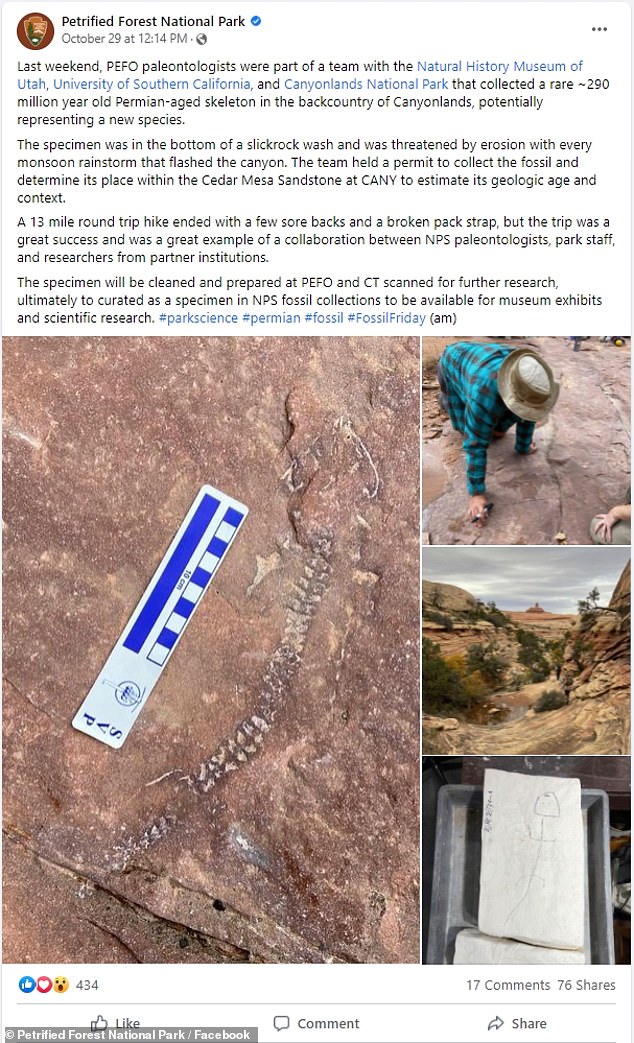 The discovery was made last month at Utah’s Canyonlands National Park by paleontologists from multiple organizations, including Arizona’s Petrified Forest National Park

After the paleontologists have determined the identity, exact age and context of the fossil, it will be sent to museums for exhibit.

‘This is an incredibly rare specimen from of the Pennsylvanian/Permian of Utah, where any kind of fossil is important, much less an articulated skeleton,’ Marsh explained.

‘It really goes to show what kind of fossil resources are hidden in our National Parks waiting to be discovered and shared with the public.’

A study published in April found that it took ten times longer on land than it did in the water.

In the oceans, the event took approximately 100,000 years to kill off most life.

However, on land, it took almost a million years to kill of land-dwelling species.

Ultimately, this event, known as the Great Dying, resulted in the extinction of 97 percent of all living species.

The Great Dying is widely considered one of ‘the most most devastating incidents of mass extinction in Earth’s history,’ according to the National Park Service.

WHAT WAS THE PERMIAN MASS EXTINCTION?

248 million years ago the Permian period ended and the Triassic period began.

The Permian mass extinction has been nicknamed the ‘The Great Dying’ as nearly all life on Earth was exterminated.

A staggering 96 per cent of all life on the planet was destroyed.

All life on Earth today is descended from that existing four percent of species’.

The cause of the mass extinction remains unclear to scientists, although it is thought to have lasted anywhere between 20,000 years to millions years.

It is thought that it was a period of time with lots of volcanic activity which may have contributed to the extinction.

The eruptions may have depleted the ozone layer – which protects the planet from damaging UV radiation.

This high-energy form of radiation can cause significant damage to living things.

Countries are scrambling to stop a new covid variant

Big-name U.S. tech investors are moving in on Europe in increasing numbers

Hyenas have stored tens of thousands of bones in Saudi Arabia lava tube for at least 6,000 years

Check out the highlights from the Indie Games Festival

Apple’s computerized glasses will be as powerful as a Mac and launch next year, top analyst says

Tesla travels 1,200km on a single charge with breakthrough battery

Cautiously optimistic: Study looks for riskiest tree disease spreaders, finds none: This study is believed to be the largest pre-invasion risk assessment of exotic...