LED streetlights kill off insect populations by half, study finds

Researchers in England found LED streetlights kill off nocturnal moth caterpillar populations by 50 per cent, compared to areas without the lights.

Despite being marketed as environmentally friendly, LED lights are even more harmful for insect populations than the traditional yellow sodium bulbs they are replacing.

The insects could also be getting killed from coming into contact with hot lights, which may also deter them from laying eggs.

LED streetlights in Curbridge, near Witney. This roundabout on the A40 was only build in the last few years and is now packed with LED lights that are affecting insect populations

The study has been conducted by scientists and conservationists at Newcastle University, the UK Centre for Ecology & Hydrology (UKCEH) and UK charity Butterfly Conservation.

Douglas Boyes of UKCEH, who led the study, spent more than 400 hours sampling for caterpillars along roadsides at a total of 55 lit and unlit sites in the Thames Valley over the past three years.

‘The rapidly increasing prevalence of LED lights, which are often much brighter as they are so energy-efficient and cheap to run, is likely to increase the negative impacts of light pollution on insects.

‘This is expected to have knock-on effects on other species, including predatory insects, hedgehogs, and songbirds, which need to find hundreds of caterpillars a day to feed themselves and their young.’

Boyes told MailOnline that minor tweaks that could be made to LEDs that could minimise their negative impacts on insects without comprising on energy efficiency, such as reducing emission of blue wavelengths.

The negative impacts of light pollution on insects including moths – which provide essential food sources for a variety of animals and are important pollinators – are well known. 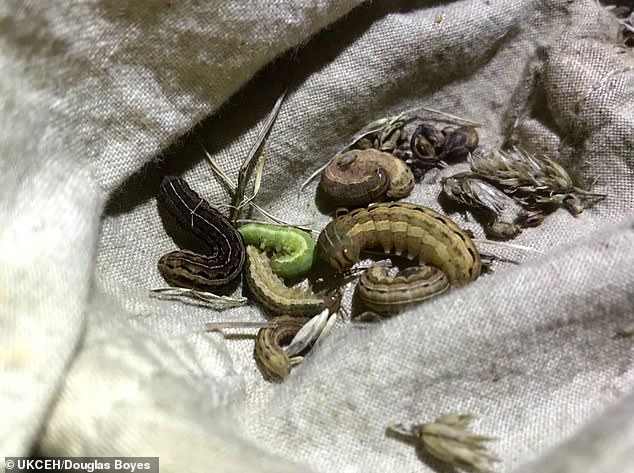 A selection of caterpillars from a sweep net sample for the study. Caterpillar abundance was substantially lower in habitat areas illuminated by streetlights 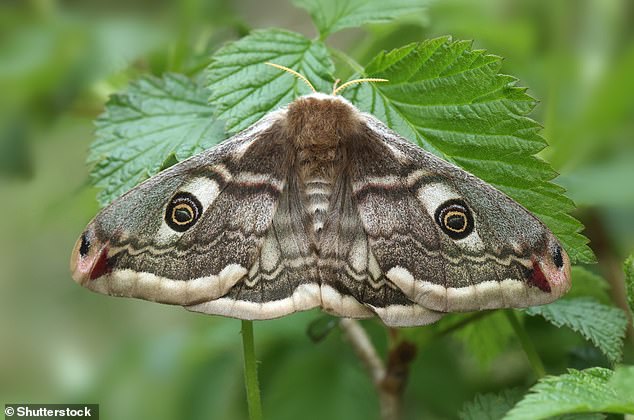 Pictured, Saturnia pavonia, the small emperor moth. Moths are important because they’re pollinators, hosts for parasitoids and prey for both vertebrates and invertebrates

Moths and other insects are attracted to light, which could result in higher mortality due to direct contact with hot lights and increased predation, according to Butterfly Conservation.

For this new study, researchers evaluated the impacts of nighttime lighting on wild caterpillars in southern England – in Oxfordshire, Buckinghamshire and Berkshire.

They compared habitats directly lit by the LED streetlights with carefully matched unlit habitat located under 200 feet away.

Boyes and his team found the abundance of moth caterpillars in hedgerows under LED street lamps was 52 per cent lower than in nearby unlit areas.

This compared with a 41 per cent lower abundance in hedgerows lit by the less environmentally-friendly sodium lighting.

Meanwhile, in grass margins, the moth caterpillar numbers near LEDs were 33 per cent lower than in unlit areas, whereas sodium lights had little effect on abundance in this habitat.

This difference may be due to female moths laying fewer eggs in habitats illuminated by streetlights, but conservationists say further research is needed to confirm this. 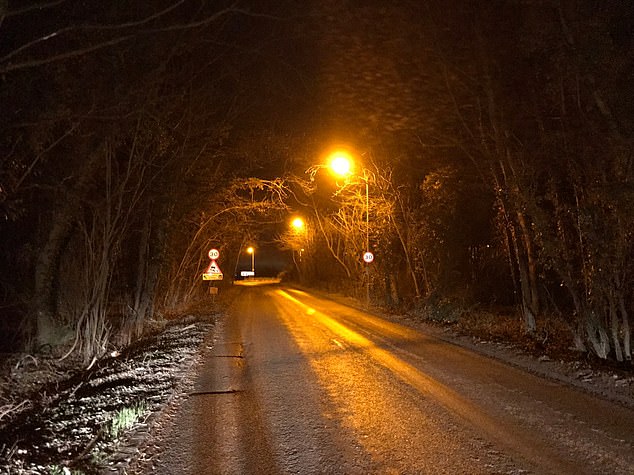 Almost all previous research on light pollution has focused on adult insects, but by studying caterpillars, which are a lot less mobile, the experts get more precise estimates of the impacts of street lighting on local populations.

What’s more, the large diversity of moths means they are broadly representative of nocturnal insects, so any negative impacts from a threat likely to also be experienced by other species.

Sadly, the total abundance of moths in Britain has decreased by one third over the past 50 years.

‘Light pollution is one of the few causes of biodiversity loss that has easy solutions,’ said co-author Professor Darren Evans of Newcastle University.

‘Ultimately, we need a balance between protecting both public safety and wildlife, by ensuring that lighting is well-designed, away from important habitats and switched on for limited times.’

The study has been published in the journal Science Advances.

LIGHT POLLUTION IS ARTIFICIAL LIGHT THAT IS EXCESSIVE, OBTRUSIVE AND WASTEFUL

Light pollution, also known as photopollution, is the presence of anthropogenic light in the night environment.

With more than nine million streetlamps and 27 million offices, factories, warehouses and homes in the UK, the quantity of light we cast into the sky is vast.

While some light escapes into space, the rest is scattered by molecules in the atmosphere making it difficult to see the stars against the night sky. What you see instead is ‘Skyglow’.

The increasing number of people living on earth and the corresponding increase in inappropriate and unshielded outdoor lighting has resulted in light pollution—a brightening night sky that has obliterated the stars for much of the world’s population.

Most people must travel far from home, away from the glow of artificial lighting, to experience the awe-inspiring expanse of the Milky Way as our ancestors once knew it.

Light pollution is excessive and inappropriate artificial light. While some light escapes into space, the rest is scattered by molecules in the atmosphere making it difficult to see the stars against the night sky. What you see instead is ‘Skyglow’

The negative effects of the loss of this inspirational natural resource might seem intangible.

But a growing body of evidence links the brightening night sky directly to measurable negative impacts on human health and immune function, on adverse behavioural changes in insect and animal populations, and on a decrease of both ambient quality and safety in our nighttime environment.

Astronomers were among the first to record the negative impacts of wasted lighting on scientific research, but for all of us, the adverse economic and environmental impacts of wasted energy are apparent in everything from the monthly electric bill to global warming.

Everything You Need to Know About the Coronavirus

Ukraine Is in an Environmental Crisis Too

Google Tensor debuts on the new Pixel 6 this fall

Google Pixel tablet tipped to get a Pro variant next year