Greenhouse gas emissions could trigger a mass extinction of marine life to levels not seen since before the dinosaurs, a new study says.

Researchers in New Jersey have modeled future extinction risks for marine life in all the world’s oceans, under different projected climate scenarios.

If emissions are not curbed, the loss of marine species from global warming and oxygen depletion could mirror the ‘Great Dying’, Earth’s deadliest extinction event, by around 2100, they say.

Known as Earth’s deadliest extinction, the Great Dying saw the loss of 95 per cent of all marine species when it occurred around 250 million years ago.

It could also match other big extinction events in Earth’s history, including the End-Cretaceous mass extinction which killed the dinosaurs 66 million years ago.

Unless greenhouse gas emissions are curbed, marine biodiversity could be on track to plummet to levels not seen since the extinction of the dinosaurs, a new study says. The study authors modeled future marine biodiversity under projected climate scenarios and found that species such as dolphinfish (pictured) would be imperiled as warming oceans decrease the ocean’s oxygen supply while increasing marine life’s metabolic demand for it 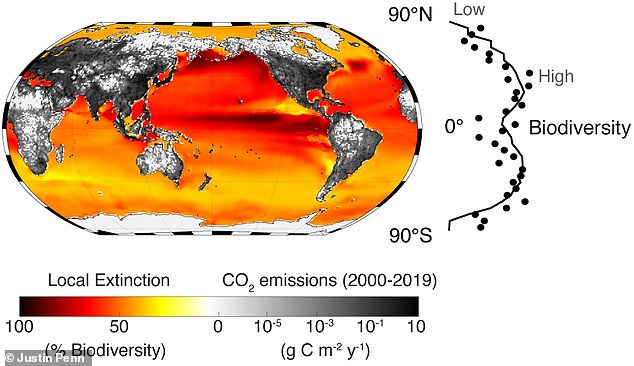 According to the researchers, tropical waters would experience the greatest loss of biodiversity, while polar species are at the highest risk of extinction.

Around 250 million years ago, a catastrophic event called the Great Dying saw almost all life on Earth wiped out.

Scientists believe around 95 per cent of all marine life perished during the mass extinction, and less than a third of life on land survived the event.

In total, it is believed that 90 per cent of all life was wiped out.

All life on Earth today is descended from the roughly 10 per cent of animals, plants and microbes that survived the extinction.

During the Great Dying, a supercontinent called Pangaea covered the Earth.

On a more positive note, reversing greenhouse gas emissions could reduce the risk of extinction by more than 70 per cent, the experts say.

‘The silver lining is that the future isn’t written in stone,’ said first author Justin Penn at Princeton University’s Department of Geosciences.

‘The extinction magnitude that we found depends strongly on how much carbon dioxide [CO2] we emit moving forward.

‘There’s still enough time to change the trajectory of CO2 emissions and prevent the magnitude of warming that would cause this mass extinction.’

The Great Dying marks a period where life on Earth has never been so close to becoming completely extinct without recovering, either before or since.

Also known as the Permian-Triassic event, it wiped out 95 per cent of marine species and 70 per cent of terrestrial species at the time roughly 250 million years ago.

When the CO2 dissolved in the oceans, they became highly acidic and the level of oxygen in the water was reduced, killing sea life.

Scientists have long debated the theories of the cause of the extinction ranging from a meteor impact to volcanoes, which could have caused climatic and environmental changes making Earth inhospitable.

But should the next mass extinction event occur, history will place the blame squarely at greenhouse gas emissions resulting from human activity. 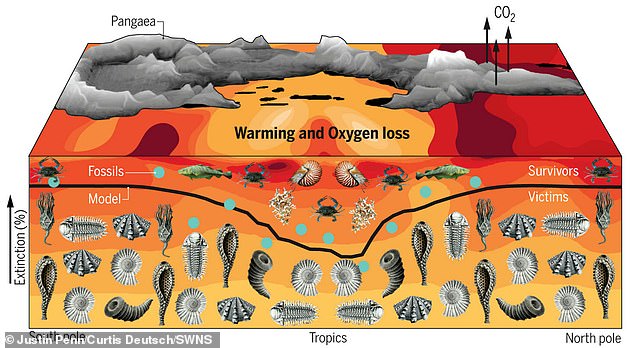 Earth has experienced five mass extinctions caused by natural phenomena, but a new study suggests a sixth event is underway and human activities are to blame.

The study, led by Robert Cowie with the University of Hawaii, notes that the Red List of Threatened Species includes mostly birds and mammals, but leaves out most invertebrates – a group that has seen a dramatic loss.

For the study, Penn and co-author Curtis Deutsch, also at Princeton, combined existing data on marine species with models of climate change to predict how changes in habitat conditions will affect their survival.

The experts compared their model to the magnitude of the ‘Big Five’, five historical mass extinctions captured in the fossil record, of which the Great Dying is one.

Seeing as the Great Dying is Earth’s deadliest extinction event, the upcoming marine extinction would therefore likely surpass the other four.

Among the events, they found a common pattern – as ocean temperature increases and oxygen availability drops, there is a pronounced decrease in the abundance of marine life.

Water temperature and oxygen availability are two key factors that will change as the climate warms due to human activity.

Warmer water is not only a risk factor for species that are adapted for cooler climates; it also holds less oxygen than cooler water, which leads to more sluggish ocean circulation that reduces the oxygen supply at depth.

Paradoxically, species’ metabolic rates increase with water temperature, so the demand for oxygen rises as the supply decreases.

The researchers compared their model to the magnitude of Earth’s ‘Big Five’ mass extinctions. The illustration above indicates the percentage of biodiversity lost during each event (left). At lower right, the loss of marine life from the present to 2300 is projected for high- and low-greenhouse gas emissions scenarios with the accompanying global temperature change

Marine animals have physiological mechanisms that allow them to cope with environmental changes, but only up to a point, the experts say. 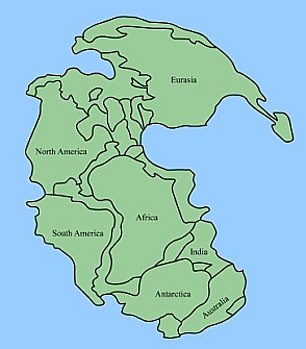 During the Great Dying, a supercontinent called Pangaea covered the Earth

The researchers found that polar species are more likely to go globally extinct if climate warming occurs because they will have no suitable habitats to move to.

Tropical marine species will likely fare better because they have traits that allow them to cope with the warm, low-oxygen waters of the tropics.

To quantify the relative importance of climate in driving extinctions, the team also compared future extinction risks from climate warming to data from the International Union for Conservation of Nature (IUCN) on current threats to various marine animals.

They found that climate change currently affects 45 per cent of the marine species at risk of extinction, but is only the fifth-most important stressor after overfishing, transportation, urban development and pollution.

However, Penn said, climate change could soon eclipse all of these stressors in importance.

‘Extreme warming would lead to climate-driven extinctions that, near the end of the century, will rival all current human stressors combined,’ he said.

The study, ‘Avoiding ocean mass extinction from climate warming,’ has been published today in the journal Science.

Five times, a vast majority of the world’s life has been snuffed out in what have been called mass extinctions.

End-Ordovician mass extinction
The first of the traditional big five extinction events, around 540 million years ago, was probably the second most severe. Virtually all life was in the sea at the time and around 85% of these species vanished.

Five times, a vast majority of the world’s life has been snuffed out in what have been called mass extinctions. The most famous may be the End-Cretaceous, which wiped out the dinosaurs. Artist’s impression

End-Permian mass extinction (the Great Dying)
The largest extinction event and the one that affected the Earth’s ecology most profoundly took place 252 million years ago. As much as 97% of species that leave a fossil record disappeared forever.

End-Triassic mass extinction
Dinosaurs first appeared in the Early Triassic, but large amphibians and mammal-like reptiles were the dominant land animals. The rapid mass extinction that occurred 201 million years ago changed that.

An asteroid slammed down on Earth 66 million years ago, and is often blamed for ending the reign of the dinosaurs.

Sport is still rife with doping

Facebook: ‘Ludicrous’ to say it fueled US Capitol riot

Andi Dorfman Reveals How She Met Her New Boyfriend