Yes, You Can Eat An Entire Thanksgiving Meal In Ice Cream 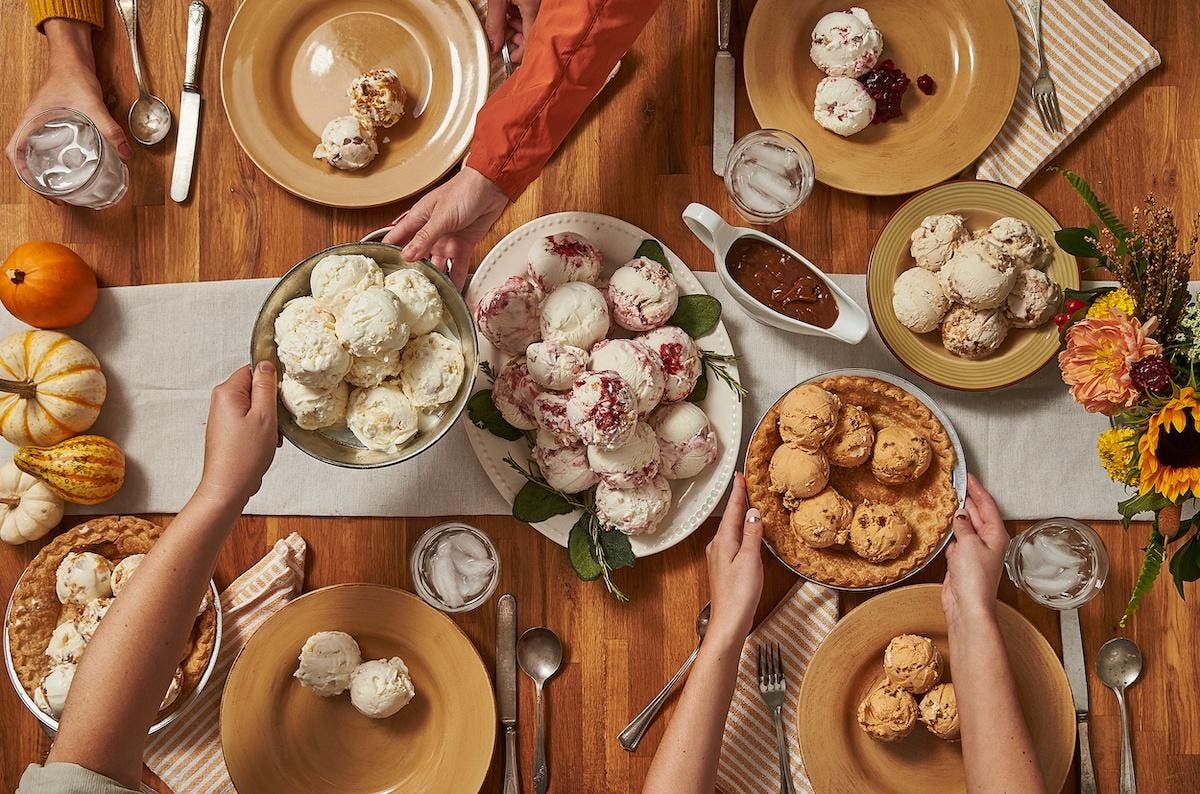 My family first discovered Salt & Straw Ice Cream on a trip to Portland, Oregon not long after they opened. We were intrigued by their weird flavors that, miraculously, worked and became some of our all-time favorites. I’m looking at you, Pear and Blue Cheese.

You can immediately taste the quality of their ingredients and one of the things we loved about that first visit was that we ordered flights so we didn’t have to settle on just one flavor.

A decade later, Salt & Straw has expanded to California, Washington and Florida and, luckily for everyone, also ships nationally.

With Thanksgiving almost here, they’ve launched their Friendsgiving menu – which is basically an entire Thanksgiving meal recreated in ice cream. I could happily do that with every meal.

Although this has become an annual Salt & Straw tradition – this is their ninth year – they do change the flavors every year.

You know the last three flavors will be delicious (and they are) because they’re all desserts but what about the Parker House Rolls? Well, it’s hard to go wrong with simple and creamy and salty, and this could end up becoming a classic.

And I know what you’re thinking about turkey-flavored ice cream but just remember: Pear and Blue Cheese. They don’t really use turkey in it but they do use turkey bacon along with their own homemade cranberry sauce and a buttery brittle. It’s got a sweet/savory taste kind of like a maple bacon donut. It doesn’t taste like turkey but it does taste like Thanksgiving.

I was so intrigued by this Friendsgiving menu that I reached out to Tyler Malek, Salt & Straw’s Co-Founder and Head Ice Cream Maker, to learn more.

I love the whole idea of the Thanksgiving meal in ice cream. Tell us a little about the thinking behind it.

This is my favorite menu of the year because it has this power of just harnessing the inherent nostalgia and togetherness of the season. Some of my best memories growing up are when all my siblings got together, our friends came over, and we just ate. My stepdad would heat up dinner rolls with giant slabs of butter, there were a plethora of pies – apple, cheesecake, sweet potato, and pumpkin – and everything was just easygoing. I wanted to capture that in ice cream. We use that Thanksgiving nostalgia as an ingredient to transport people into a place where family, friends, and strangers can sit around a table and enjoy ice cream.

Are they only sold as a collection or can each flavor be purchased separately?

The full Friendsgiving series can be purchased online for nationwide shipping. Each individual flavor can be purchased at any of our 25 retail locations or through local delivery throughout California, Oregon, Washington and Florida.

How long will these flavors be available?

The Friendsgiving series will be available through the end of November.

What’s been the reaction so far?

People LOVE this menu! My favorite part is when someone brings their friend to the shop, they stand behind them as their guest gawks at the menu and then they say to their Scooper, “It’s their first time at Salt & Straw… show them what they’ve been missing out on!”

How did you decide on these specific flavors? Were there ones you wanted to do that just didn’t work as ice cream – e.g. gravy, green bean casserole?

You’re right! Choosing only five dishes to make from the Thanksgiving table is near impossible! Honestly, over the last 10 years we’ve had a lot of fun reimagining our favorite Thanksgiving classics and have made some incredible recipes ranging from Mashed Potatoes w/ White Chocolate Gravy (that one’s in our cookbook) to Peach and Sage Cornbread Stuffing. Honestly, the only saving grace is that we get to come back next year and put out a new menu of fun creations.

Can you share a little about how you actually create some of these flavors in ice cream form?

The most important part of recipe creation is agreeing on what we want the tasting experience to be. Thanksgiving turkey ice cream is the perfect example; in that one, I think a nicely crisped skin and fresh herbs is what makes a turkey truly great. To replicate that texture and flavor, we played with a few iterations of turkey and landed on turkey bacon. it has a pleasant crispness and solid meaty flavor. We fold that turkey bacon into a butter brittle spiked with thyme, salt, and pepper and top it off with a slather of cranberry sauce to give it a touch of acidity that cuts through the sweetness.

Have you done other series like this in the past? Any that you’re working on for the future?

We release new menus on the first Friday of every month. It’s become iconic at Salt & Straw to roll out flavors that tell important stories about non-profits, food trends, and our favorite local ingredients. Some of our favorite menus include a partnership with nonprofits to talk about food waste through ice cream flavors. For example, we partnered with Scholastic books last summer to create flavors that ignited creative storytelling by local elementary students, and, next January, we have a menu called Vegandulgence where we set out to prove that vegan ice cream can be more delicious than anything you’ve ever eaten before.

Which flavors are your most popular, in general?

Since we change our flavors every month, this answer changes all the time! Right now, I think it’s a tie between the Pumpkin Gingersnap Pie and the Parker House Rolls w/ Salted Buttercream. Next month, I bet our seasonal flavor, Almond Brittle w/ Salted Ganache, will win out. That flavor being so popular is extra special as it was inspired by our Grandmom.

If you want to be invited back to Thanksgiving at someone else’s house again next year, consider bringing the Friendsgiving collection as your contribution to the feast. I guarantee you everyone will be grateful and you will be added to everyone’s guest lists.

Office Comfort Style Is Key For Success In Fall/Winter 2022

Sara Ali Khan in sarees: Traditional and quirk, a match made in heaven

Coronavirus Stress: How stressful is COVID-19 for you? Your hair can tell the answer!

Diwali 2021: Easy Tips to Organise a Card Party at Home on Diwali

Maintaining balance in the brain

Dr. Scott Gottlieb sees vaccines for kids as a key to turning the tide in the Covid pandemic