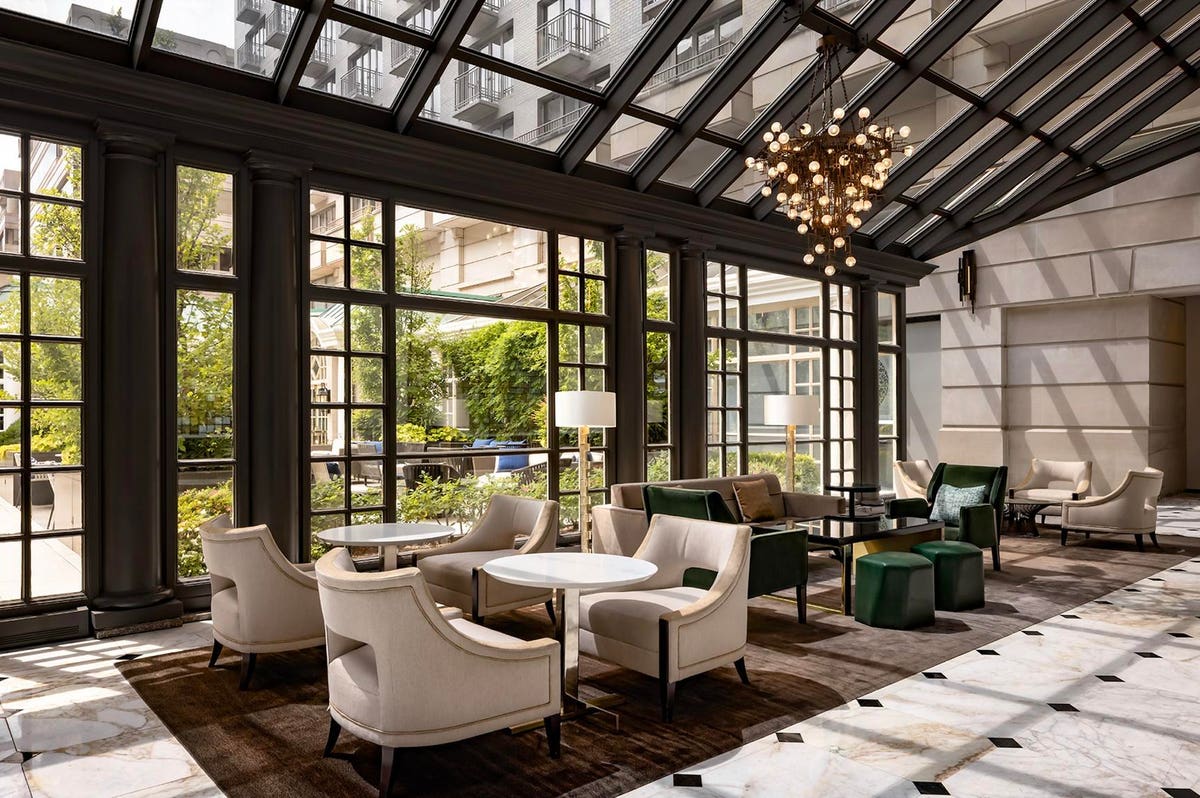 If you haven’t stayed at a Fairmont Hotel, chances are high that you’ve seen one. Though the hotel group counts less than 80 properties worldwide, Fairmont Hotels have been featured in so many films that the group had to list out by property which movies and TV shows were shot where. The famed Plaza Hotel (managed by Fairmont Hotels) that overlooks Central Park in NYC, for instance, counts the Gentlemen’s Agreement, filmed in 1947, as well both renditions of The Great Gatsby (directed in 1974 by Jack Clayton and in 2013 by Baz Luhrmann) as a few of its 100+ film credits. Unsurprisingly, the Fairmont Hotels’ motto is, “Unforgettable. Since 1907.”

Though the Washington D.C. Fairmont property has only been named a Fairmont since 2007, I’m confident it’s just a matter of time before this property collects a list of its own film credits. I stayed this summer for a handful of days at this Fairmont while on a trip to D.C., and it’s clear this hotel has quite a lot that draws business travelers and locals alike.

The Fairmont Washington, D.C.’s first attribute is its one-two punch of culinary power: Executive Chef Jordi Gallardo and Executive Pasty Chef A.J. Thalakkat. Gallardo has been in the Fairmont family since 2003 and has toured several of the group’s properties around the world including in Arizona and Canada. Now at the D.C.

location for more than five years, Gallardo has garnered quite a local name with annual traditions and culinary occasions. I heard Gallardo’s name twice while chatting up locals at the bar one evening. The talk at the moment is the interest in the reopening of the Courtyard Bar in October. Beloved by foreign dignitaries and D.C. lobbyists, the Courtyard Bar will reopen with Gallardo’s weekly champagne sabering ceremony that includes caviar, seafood towers, homemade Mac ’n cheese, foie gras, and more. Later in November, Gallardo’s signature Thanksgiving brunch extravaganza will be held once again at the hotel’s Colonnade Restaurant. People are already making reservations, according to the bartender.

One thing arguably better than exciting cuisine is extraordinary chocolate. While the executive pastry chef for the Fairmont in British Columbia, Canada from 2014 to 2018,

Ashish Thalakkat (A.J.) whipped up four signature chocolates for the Fairmont at his “chocolate lab” in France. His chocolates have been drizzling his flakey croissants and elegant twist torsades since his arrival at the D.C. Fairmont in the summer of 2020. The chocolates are so popular that bulk bags of them are sold in the hotel’s gift store. I took two whole bags back with me to California to the surprise of a TSA officer.

In addition to a packed schedule of events that keeps the D.C. Fairmont buzzing, the property is part of its parent company’s Planet 21 initiative, a 2nd attribute worth mentioning. I pay increasing attention to hotel chains’ environmental commitments as waste in the industry has become a dominant topic within hotel management, as it should be. According to Accor, the parent company that owns Fairmont Hotels, 1,882 Accor hotels have rolled out a program to combat food waste, 1,218 urban vegetable gardens have been created within the hotel collection, and more than seven million trees have been planted since 2016 when Planet 21 was instated. The Fairmont Washington, D.C. has been quietly modeling good environmental stewardship for years. In particular, honey bees have been the stars of environmental stewardship. In 2009, the hotel welcomed more than 100,000 Italian honey bees to the hotel’s rooftop and have been providing 300 pounds of honey a year for Chef Gallardo’s soups, pastries, cocktails,

and more ever since. While bees contribute to the hotel’s culinary delights, they also play a major role as efficient pollinators of plants, 90% of which rely on pollination to reproduce. Beyond bees, this property has also secured wind power, enrolled in the US EPA Energy Star Program, cut its CO2 emissions by 20 percent back in 2006, and donated more than 10,500 pounds of recycled bath and bed amenities.

Lastly, for those who love the holidays, this Fairmont brings total delight and is another reason that makes the Fairmont Washington, D.C. a special property among the group’s collection. Starting December 4th, Santa will be checking in once again to his Santa Suite for 15 minute complimentary visits with all boys and girls. This year, Santa already called his Harry Potter pals who will be giving the suite a Hogwart flair. I was already informed not to forget to snag a few of Thalakkat’s signature gingerbread cookies.

Coronavirus vaccination: Here’s why you are asked to not rub or massage the injection site after vaccination | The Times of India

Carol Kirkwood on her horrific bike accident: ‘Nerves were hanging out of my knee’

Detecting dementia in the blood: New diagnostics for Alzheimer’s?

Is BMI The Best Health Parameter Or Is It An Outdated Calculator?