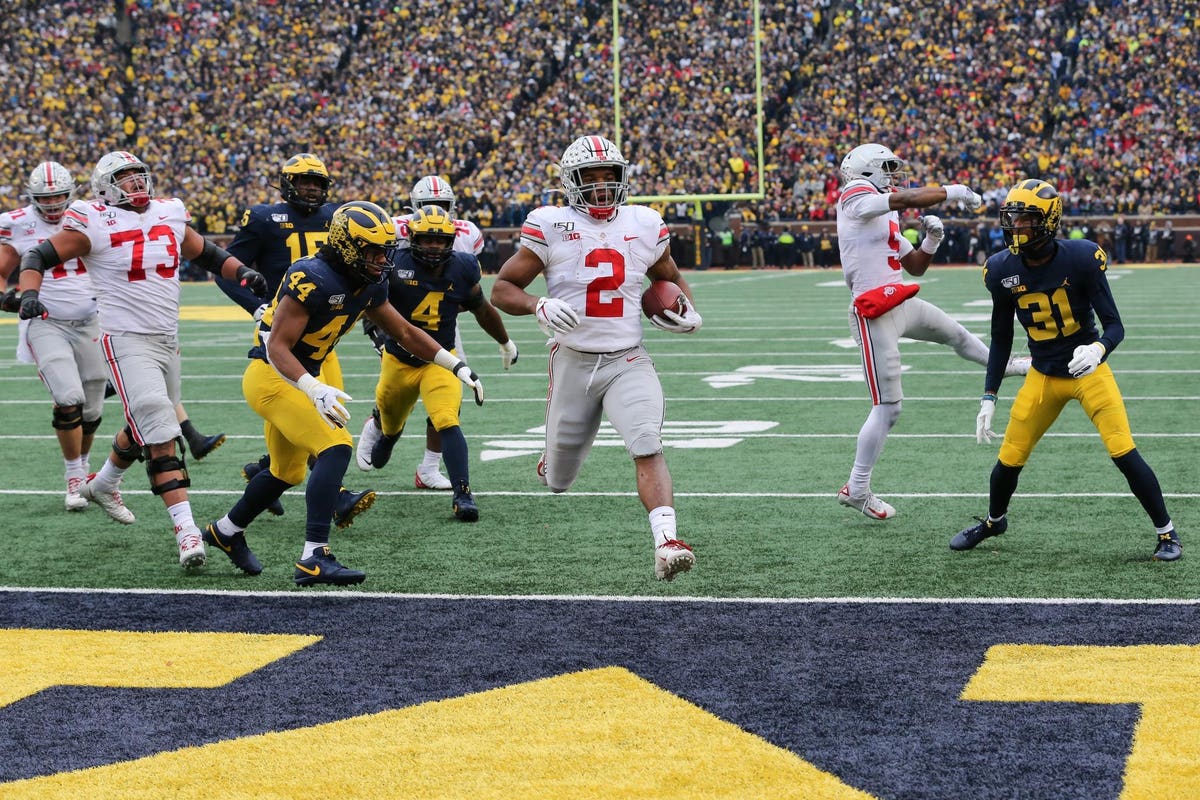 The stakes keep getting higher as the top teams battle for a spot in the College Football Playoff. Some major rivalry games Thanksgiving weekend will knock the stuffing out of some key contenders while other will be feasting on turkey leftovers with a winning week over their biggest rivals.

Along with College Football Playoff implications, conference titles are at stake. The winners in the ‘The Game’ between Michigan and Ohio State along with the ‘Bedlam’ battle between Oklahoma and Oklahoma State will advance the their conference championship games on Dec. 4. Actually, Oklahoma State has already secured their spot in the Big 12 Championship game, and a Bedlam rivalry win by Oklahoma will set up a rematch in the Big 12 championship.

Caesars Sportsbook provided a two page listing of the biggest rivalry games, point spreads and both percentage of bets and amount of money (handle) supporting the teams. More money continues to pour in as the games approach with Thanksgiving and rivalry week one of the most popular betting weekends of the year. More fans and recreational bettors will be tuning in and betting a few bucks.

Ohio State has won 8-straight in the big rivalry and 15 of the last 16. ESPN College GameDay will be in Ann Arbor for pre-game coverage. Kickoff is at 12:00 p.m. ET and FOX carries the TV coverage.

Both teams enter the huge rivalry 10-1 with the Buckeye’s off a 56-7 blowout win over Michigan State last week. Ohio State opened a 7.5 point favorite over Michigan. It’s now -8.5 favoring the Buckeyes and the total is also up to 65 at Caesars Sportsbook, where I bet on the Wolverines to cover the spread and win the game outright.

The rivalry known as ‘The Game’ has drawn more than 90% of the spread bets on Ohio State at Caesars Sportsbook. Last week’s results and Ohio State’s blowout win has influenced the betting line by as much as 2-3 points.

Bettors are banking on the Buckeye’s potent offense and redshirt freshman Heisman favorite quarterback C.J. Stroud to deliver another knockout punch. Ohio State leads the country in scoring offense (47.2), yards per game (560) and yards per play (7.9). The Buckeyes are the only FBS team this season with three 800-yard receivers.

“Just how good they are,” Harbaugh told reporters Monday when asked about OSU’s receivers. “How dynamic. Their route-running ability, their catching ability, their speed to all parts of the field — horizontally, vertically. Really outstanding.”

Michigan is no slouch with its top-20 balanced offense averaging 448 yards per game with 218 rushing and 230 passing.

Ohio State moved up to No. 2 in this week’s college football playoff rankings while Michigan enters at No. 5 setting up the biggest game of the year. A Big Ten East title, Big Ten Championship game appearance Dec. 4 as a sizeable favorite and a front row ticket to join the four team College Football Playoff party.

Cincinnati is the first Group of 5 program to appear in the College Football Playoff Committee’s top four at any point of the season in the eight-year history of the Playoff.

Along with Ohio State at Michigan, here are added rivalry match-ups with links to game previews and betting breakdown from CollegeFootballNews.com. Additional picks from contributing editors and media members with added game analysis as provided. Compare game odds, spread, totals and moneyline of all the games at TheLines.com.

Oklahoma and Oklahoma State are both 10-1 and the Cowboys have covered 9-straight games against the point spread. Oklahoma is 0-4 ATS on the road this season plus a neutral site win against Texas. Oklahoma State is a 4.5-point favorite and the over/under has been bet down from 52 to 49.5 at Caesars Sportsbook.

Plenty of big game rivalries ahead of next weekends conference championship games as the College Football Playoff picture takes shape.

You can bet on it.

Sanya Malhotra, in a yellow embellished lehenga, is a work of art

Coronavirus | Hybrid Immunity: What is ‘hybrid immunity’? Should people who had COVID-19 still get their vaccine shot? Find out

2021 Porsche 911 Carrera S Cabriolet: There Is No Substitute