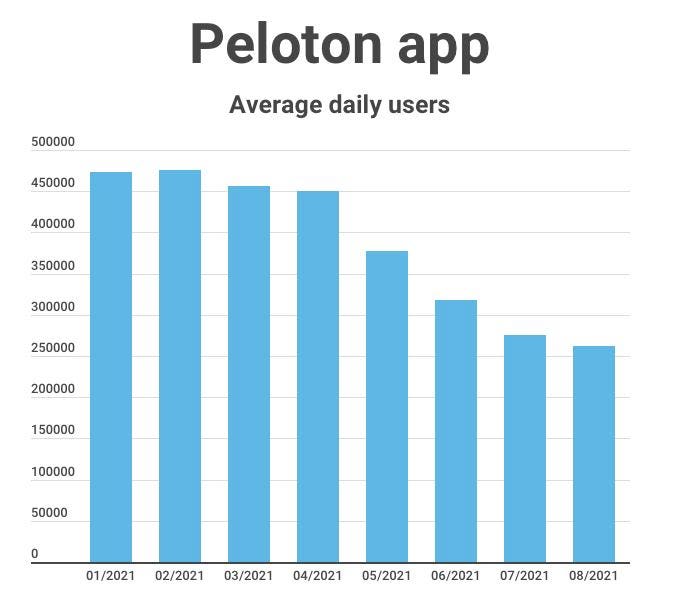 Use of the Peloton app has declined in each of the seven months, and rapidly in the last four months, according to data from app intelligence service Apptopia. That’s a much bigger and faster decline than competitors like iFit.

2021, apparently, is annus horribilus for Peloton.

The iconic fitness and wellness company is struggling with slower sales due to the easing of the Covid-19 pandemic, an investigation by the U.S. government into problems with Peleton’s Tread+ treadmill, which the company recalled after being implicated in multiple injuries and at least one death of children, and a massive drop in stock price.

Now it’s clear that even existing owners are not using their Pelotons as much.

Perhaps they’re returning to the gym post vaccination. Or perhaps they were using products that were recalled.

In any case, the total decline since April is 41.7%. Just as shocking is that the drop is mostly steady from month to month. One ray of hope for Peloton: August saw a smaller dip than the previous months.

The fitness market overall is changing, of course, as the number of vaccinated people increases and states and countries continue to reopen. But smaller competitor iFit only dropped 16.5% over the same time period, and basically reached a steady state in June rather than August.

The big picture, of course, is that Peloton, like other home fitness companies, exploded with growth during in the heart of the pandemic in 2020. Its stock grew 644% from September 2019 to December 2020 as fitness addicts needed to replace a gym or spinning experience in their homes.

So a bit of a pullback is only to be expected.

Unfortunately, this looks like more than a pullback. This looks like a major hurdle that will take time and dedication to reverse.

Home fitness is not going away. And its baseline is likely higher today and for the foreseeable future than what it was pre-pandemic. But Peloton has a lot of work to do to reassure customers that its products are safe, to settle existing lawsuits, and to rebuild its product portfolio in safe and attractive way.

Elli AvrRam, in this bridal ensemble, looks right out of a fairytale

COVID-19 vaccination strategies: When is one dose better than two? Under certain conditions, vaccinating more people with a single dose slows virus spread

Animated heat map shows progression of COVID-19 pandemic in US

The real life of Monica Lewinsky

In neon green and denim, Bipasha Basu is beach ready