Women 15% more likely to die, suffer complications, during surgery if operated on by a man

Women are 15 percent more likely to die or suffer a serious injury if they’re operated on by a man than a surgeon who is their own gender, a study shows.

Researchers from Vanderbilt University in Nashville, Tennessee and the University of Toronto, in Canada, investigated the likelihood of someone to suffer either death or another severe complication based on the gender of their surgeon.

They found that when women operate on women, men on men, or women or men, there was no increased risk of death or other complications.

When men operate on women, though, the person receiving the procedure is at a 15 percent increased likelihood to either die, or suffer another negative outcome.

Researchers cannot explain why exactly this happens, and say further research is needed into why being operated on by a man is more dangerous for a female patient.

Researchers found that women who were operated on by a male surgeon were 15% more likely to either die or suffer severe complications as a result of the operation. There was no increased risk found if a woman operated on a man (file photo)

‘What is surprising and troubling is that negative outcomes, including complications and death, were linked to sex discordance,’ Dr Amalia Cochran, a surgeon at the University of Florida, wrote in a research letter.

The research team, which published its findings last week in JAMA Surgery, gathered data from 180,000 surgeries, both elective and emergent, in Canada from November 2020 to March 2021.

Of that group, 717,548 were ‘sex discordant’ – when the surgeon and the patient are different genders.

Around 15 percent of the 180,000 procedures that were included ended in a patient either dying, or suffering another major complication as a result.

Researchers then controlled the data for other factors that could cause a person to suffer complications from surgery, like the type of surgery, age, and conditions the patient may suffer.

After adjustments, they found that there was no increased risk of death or other complication when the surgeon and patient were both the same gender.

There was also no increased risk when the physician was a woman who was operating on a man.

When a woman was being operated on by a male, though, the overall risk would sharply increase 15 percent.

Cochran notes that the reasons for this are not understood, but a way to instantly prevent negative surgical outcomes for women is to close the gender gap in the amount of surgeons in America. 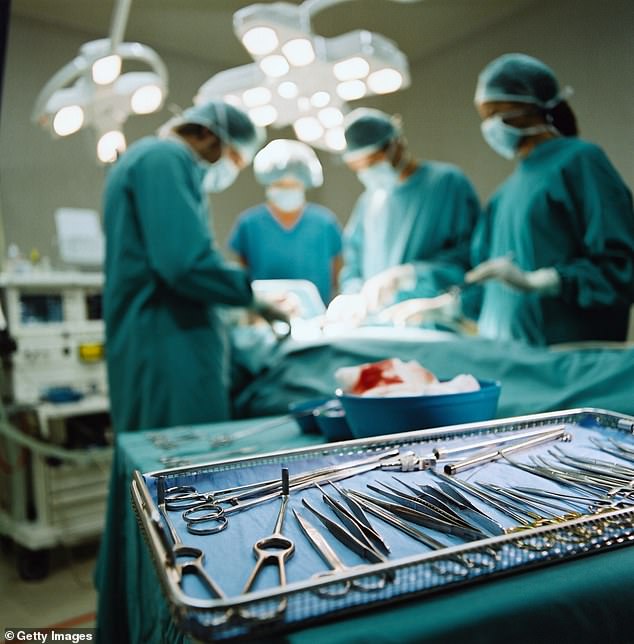 Researchers are not sure the exact reason for the disparity in outcomes for women depneing on the gender of their surgeon, but one expert writes the issue could be mitigated in the interim by introducing more women to the emergency room (file photo)

‘Although the underlying reasons for this disparity are not fully understood, which warrants further investigation, action should be taken immediately,’ she said.

‘The elephant in the room is the paucity of female surgeons.

‘In 2019, only 22% of general surgeons in the US were women, and orthopedic surgery had the lowest representation of female surgeons.’

She also believes that current surgeons should reflect on their own work, and make sure they are not providing women with subpar care.

‘Self-reflection is warranted on the way in which we provide care. Surgeons likely believe they provide the same quality of care to patients irrespective of identity,’ she continued.

‘However, these data underscore an underappreciated phenomenon and highlight a measurable repercussion of implicit bias.’

Cochran also says that hospital leadership can take action, and include metrics about how a surgeon performs based on their patient’s gender in workplace reviews.

She also recommends sensitivity training in surgeons to figure out what the problem causing these disparities is, and root it out.

How To Have The Perfect Weekend In Greece’s Nafplio

CDC: ‘Avoid Travel’ To This Caribbean Destination Due To Covid-19

Vintage Roadster Wakes Me Up Fast

“Obesity is socially unacceptable”: Why Lord Robathan’s take on obesity is problematic – Times of India

Nothing to see here. Just a picture of Malaika Arora looking like a million bucks

Things to keep in mind while doing bodyweight exercises

Face Masks Do Not Significantly Increase Your Body Temperature During Exercises, Says Study

NHS pressure sees No10 hint at return of Covid restrictions