Britain’s daily Covid cases rose for the second day in a row today amid signs the country’s outbreak is no longer shrinking.

Government dashboard data showed 45,656 infections were logged over the last 24 hours, up 17 per cent on the tally last Thursday. A month of falling infections was brought to an end yesterday.

Another 194 Covid deaths were also registered today, up 55 per cent on last week, but fatalities are still trending downwards.

Meanwhile, latest hospitalisation data shows there were 1,058 admissions on February 27, down two per cent on the week before.

The rise in cases comes after England’s Freedom Day last week, which saw all legally binding Covid restrictions lifted, including compulsory masks on public transport and the mandatory isolation for infected people.

It also coincides with the emergence of a more infectious version of Omicron, named BA.2, which has outstripped its parent strain to become dominant.

Experts warn it may cause some fluctuations in case rates, but say there is no reason to panic because there is no evidence the strain is more likely to cause severe disease. The original Omicron wave — which sparked fears of a pre-Christmas lockdown — never overwhelmed the NHS. 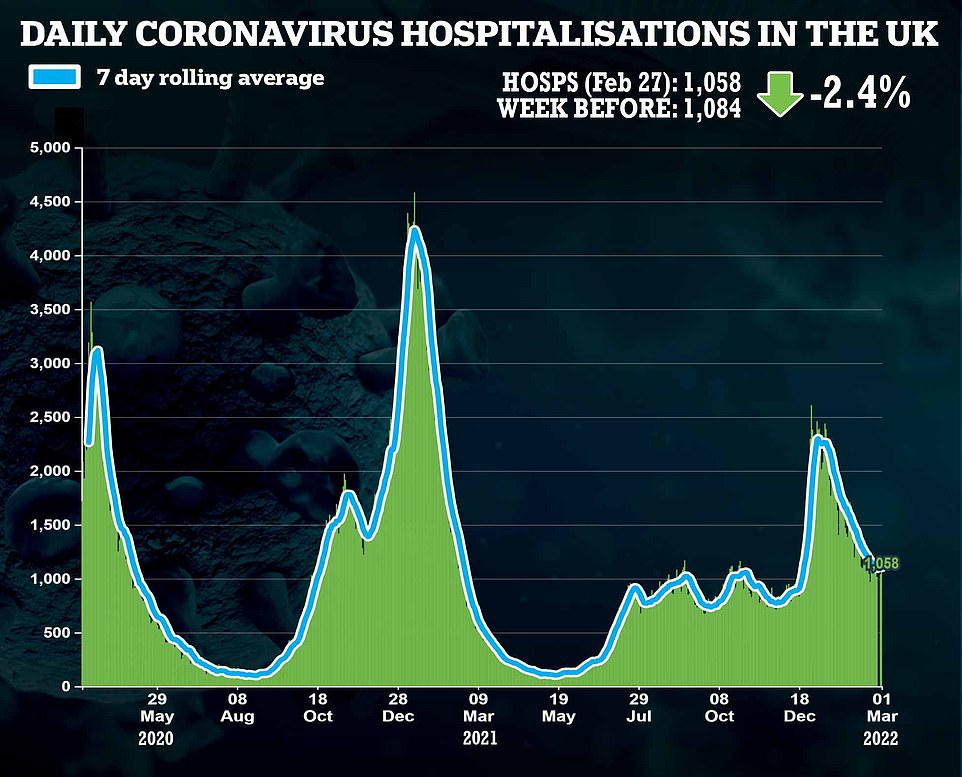 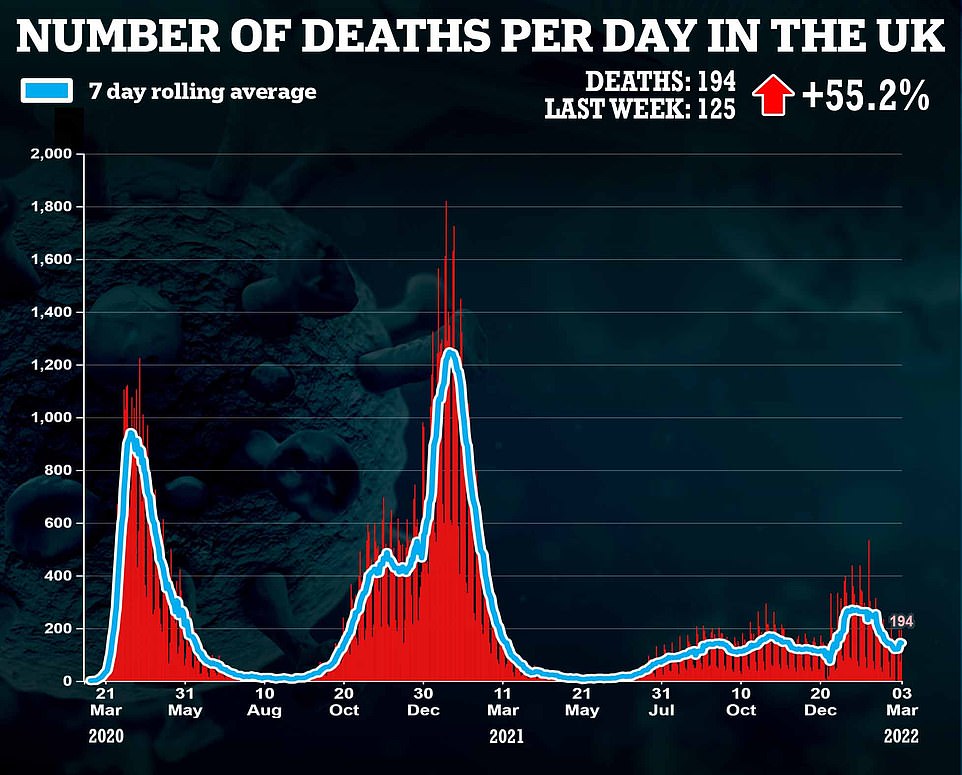 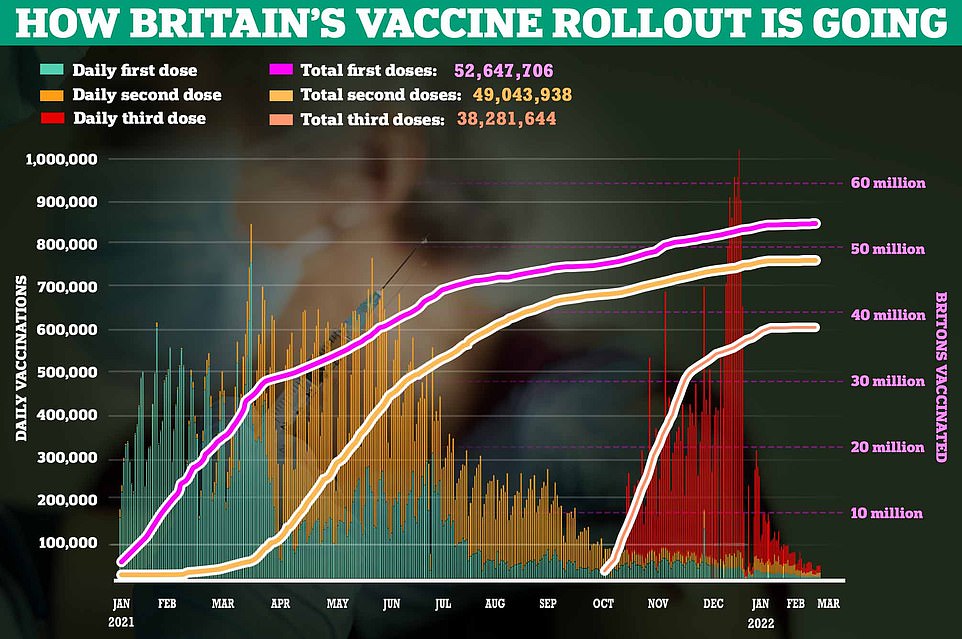 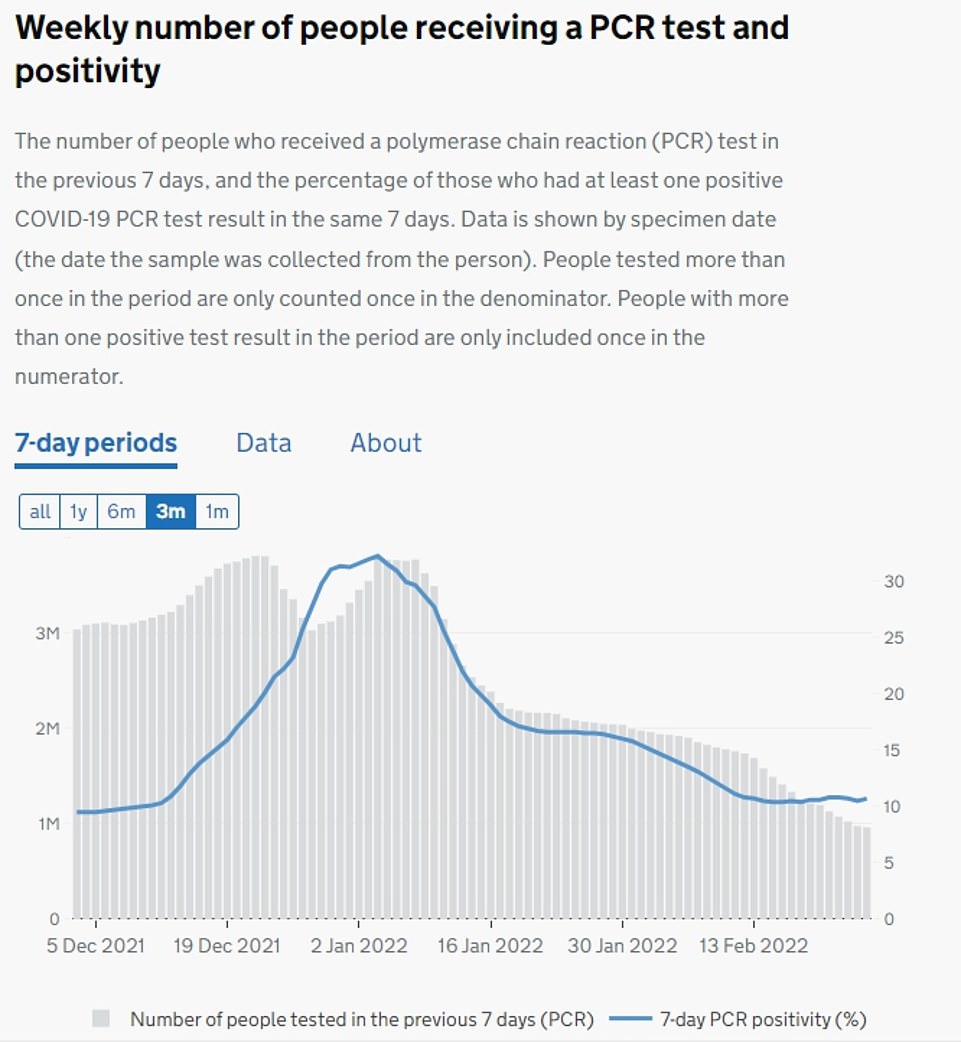 Above is the PCR positivity rate (blue line) for England, showing the proportion of swabs that detect the virus. It is creeping back up suggesting cases are growing again in the country

The uptick comes after Boris Johnson ditched all of England’s remaining coronavirus laws on February 24, with requirements to wear face masks on public transport and isolate coming to an end.

Mass testing is also set to be shelved on April 1, with the country shifting to relying on national surveillance.

Government dashboard data shows the number of Covid tests carried out across the UK fell by seven per cent yesterday, the latest available, compared to the same time last week as the tests are rationed ahead of being scrapped entirely.

The PCR positivity rate — the proportion of swabs processed in a lab that come back positive — is also pointing upwards slightly, in another sign that the outbreak is now growing.

Across the four UK nations, cases rose in Scotland (up 32 per cent in a week) and England (up 16 per cent), but they fell in Wales (down 15 per cent) and Northern Ireland (down three per cent).

Scientists in Canada believe they have detected the first probable case of a deer transmitting Covid to a human.

The suspected infection happened last November in Ontario and involved an unnamed person who had ‘close contact with deer’.

It was revealed in a pre-print study by Iowa State University, which has not been peer-reviewed.

A herd of 17 white-tailed deer were found to be infected with a ‘new and highly divergent’ variant of the virus in November and December 2021.

Analysis of positive swabs matched the strain to a person who lived in the same southwestern region of the Canadian province.

While the study could not definitively prove the patient caught Covid from a deer, they said it was ‘likely’ due to their close interaction and fact it was an isolated case.

Covid has become widespread in the deer populations of North America, with up to 80 per cent of the animals infected in some US states.

It is not clear how the deer are catching the virus in such high numbers, but studies suggest it could be through drinking water contaminated with human faeces.

It comes after a major trial revealed an arthritis drug cuts the risk of severely ill Covid patients dying by as much as a fifth.

The protection is on top of that given from dexamethasone and tocilizumab, two medicines already proven to save the lives of the infected.

Results of the Oxford University Recovery trial, involving 8,000 hospitalised Covid patients, will add another weapon to the ‘suite’ of treatments available to fight the virus.

All of the patients received standard NHS treatment, but half also had baricitinib — which is given as a £25 tablet once a day for ten days.

Thirty-three fewer deaths were recorded in the group given the drug, compared to those kept on the drugs already available. This equated to an additional 13 per cent reduced risk, the researchers calculated.

But scientists claimed the benefit could actually be as high as 20 per cent.

Sir Martin Landray, an epidemiologist behind the research, said today’s results were a ‘big step’ towards getting the drug available in the UK.

It has been dished out to severely ill Covid patients in the US since November 2020.

Baricitinib was first approved five years ago to treat rheumatoid arthritis, a condition where the immune system misfires and attacks the joints.

This leads to inflammation in the affected areas, which the medicine reduces to ease pain and swelling.

Baricitinib, available on prescription under the brand name Olumiant in the UK, is just the latest drug spotted by the Recovery trial that could help Covid patients.

It found dexamethasone — a £5 drug that has existed for decades — cut the risk of death by a fifth in June 2020.

Eight months later it revealed tocilizumab, which costs £600 per treatment, could halve the risk of severely ill patients dying.

In the latest study — released as a pre-print today — participants were around 58 years old and recruited between February and December last year.

About two-thirds were receiving oxygen, and a further quarter were on additional respiratory support. The majority were given a corticosteroid such as dexamethasone.

A total of 4,008 patients received ‘usual’ NHS care, while 4,148 received that plus baricitinib.

The benefit of baricitinib was consistent regardless of which other Covid treatments the patients were also receiving, including corticosteroids, tocilizumab or remdesivir. 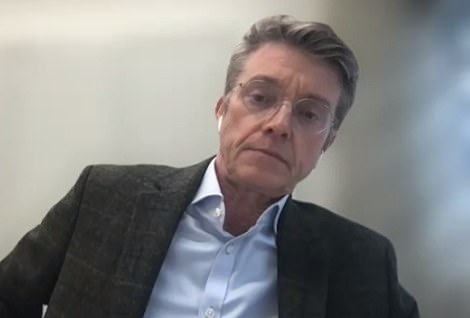 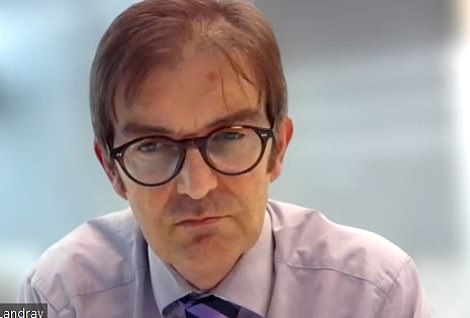 Sir Martin Landray, a professor in epidemiology at Oxford University, said today’s results were a big step in approving the drug for use in the UK.

Outbreaks of norovirus have shot up by two-thirds in a week in care homes, health chiefs have warned.

There were 40 outbreaks of the highly infectious virus, which causes sickness and diarrhoea, in care homes last week. For comparison, 24 were logged in the previous seven-day spell.

A rise in norovirus cases among care home residents is usually followed by a spike in hospital outbreaks, the UK Health Security Agency (UKHSA) warned.

Rates were also high in schools and nurseries, sparking an alert from officials.

There were 135 norovirus outbreaks – defined as at least two cases – in schools and nurseries in the four weeks to February 20. This was 48 per cent more than normal.

Norovirus infections were suppressed during Covid as a result of measures brought in to fight the pandemic, resulting in reduced immunity against the bug.

Health chiefs warned that, as a result, ‘it is possible that unusual or out of season increases could be seen in the coming months’.

It comes after one of the Government’s chief pandemic advisers admitted grim-modelling that over-egged the Omicron wave failed to ‘accurately predict the numbers’ because it did not factor in behaviour changes.

When the ultra-transmissible variant struck, SAGE scientists warned deaths could peak at 6,000 a day with 10,000 hospital admissions, sparking calls for another lockdown.

But in reality, fatalities only reached 300 a day, or a quarter of the levels seen last winter, and hospitalisations peaked at around 2,000.

Ministers did impose ‘Plan B’ measures, including asking people to work from home, yet beforehand millions were already choosing to stay home to avoid catching the virus and having to self-isolate on Christmas Day.

Professor Graham Medley, who chairs a modelling group feeding into SAGE, told MPs it was almost impossible to predict human behaviour and that it was his job to consider pessimistic outcomes.

‘The epidemic is dynamic,’ he said. ‘People’s responses to the situation in March 2020 were very different to those in November 2020 and very different again in January 2021.’

Professor Medley, based at the London School of Hygiene and Tropical Medicine, added: ‘The modelling is there to understand the process and what’s going on. We know we cannot accurately predict the numbers but we can give insight into the processes that determine the outcomes.’

SAGE’s models have been heavily criticised during the pandemic with many scientists claiming they fail to account for basic behavioural changes and underestimating the strength of natural immunity.

Even before Omicron emerged, the group warned there could be 6,000 Covid hospital admissions this winter from Delta alone — which would have been triple the number we seen with Omicron.

When England was coming out of its winter 2021 lockdown, SAGE said there could be 2,000 daily hospital admissions and over 500 deaths at the height of summer without delaying the roadmap.

Professor Medley, who heads up the Scientific Pandemic Insights Group on Modelling (SPI-M), was speaking to MPs in the Science and Technology committee yesterday.

Describing his role on the committee, Professor Medley said one of the ‘worst things’ would be for the modellers to under-predict the approaching wave.

He told MPs: ‘The worst thing for me as chair of the committee is for the Government to say “why didn’t you tell us it would be that bad?”, so inevitably we are going to have a worst case that is worse than reality.

Professor Medley said the committee would give ministers a range of scenarios for what could happen during a Covid wave.

But they would not say which was more likely for fear of influencing policy decisions.

Jacqueline Jossa on confidence, learning beauty lessons from her mum and finding ‘me time’

Which classic literary character are you, based on your zodiac sign

The Year in Overflow Culture

Watch: Nepal Stumper Refuses to Run Out Ireland Batter Who Was Unintentionally Tripped by The Bowler