Americans who receive their flu and shingles vaccines at the same time are less likely to come back and get their routine influenza shot again one year later, a new study suggests.

Researchers at Brigham and Women’s Hospital and Harvard University Medical School, both in Boston, Massachusetts, found that the strategy to get Americans their shots at once could be incidentally driving down vaccination rates.

They found older Americans who received their flu and shingles immunizations together were five percent less likely to return to get their flu shot again the next year.

While they cannot pin-point a reason, they believe it is because people are misinterpreting the serious symptoms of the shingles jab for the flu shot, and being put off by it.

Researchers found that people who got their shingles vaccine and flu shot together were 5% less likely to return to get a flu shot in a subsequent year. They believe this could be because people were misinterpreting side effects of the shingles shot as being caused by the flu jab (file photo) 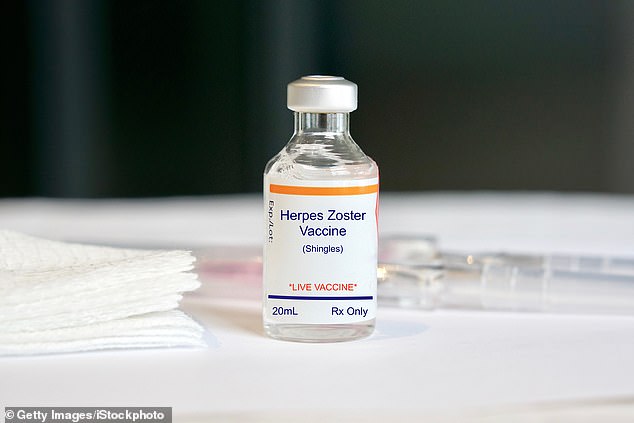 The shingles vaccine, also called the zoster vaccine (pictured), is a two-dose jab for people over the age of 50. The doses are taken two to six months apart

Researchers gathered data from the 2018 and 2019 flu season for the study, avoiding the pandemic period, where very few Americans received their yearly influenza jab.

The team, who published their findings Friday in JAMA Network Open, gathered data from nearly 90,000 local residents who received both the flu and shingles, or zoster, vaccines in 2018.

People aged 50 years or older are recommended to receive the two-dose shingles vaccine, with each shot coming two to six months apart.

The side effects of the shot can be wide-ranging, and the Centers for Disease Control and Prevention (CDC) reports it could affect someone’s ability to perform routine tasks for two to three days.

‘Most people got a sore arm with mild or moderate pain after getting [the shot], and some also had redness and swelling where they got the shot. Some people felt tired, had muscle pain, a headache, shivering, fever, stomach pain, or nausea,’ the CDC writes.

Many people who receive their shingles vaccine will receive their flu shot at the same time because doctors recommend it to them in an effort to save time and to increase vaccine coverage.

A year later, the shingles shot regimen would have been completed, but people would be expected to come back in for their flu shot again.

Researchers found that 91 percent of people who received their flu shot separately from the shingles vaccine in 2018 did return next flu season.

However, those who received their shots together the next year were less likely to return with only 87 percent of recipients getting their flu shot in 2019.

Researchers believe the potentially-intense side effects of the shingles vaccine may have turned some people off from the flu shot as well.

Shingles is a condition that affects people who previously had chickenpox. It causes a person to break into a rash. It is rarely deadly. Pictured: A rash cause by shingles

‘One possible explanation is that some patients could have misattributed systemic side effects caused by the zoster vaccine to the influenza vaccine,’ researchers wrote.

‘It may be preferable to administer these [two] vaccines separately or enhance patient counseling about expected vaccine side effects.’

Another potential explanation is that people only received their flu shot because they were offered it when they went to get the shingles vaccine, and did not care for the routine vaccine anymore once they had already received the shingles shot.

Shingles is a virus that can effect people who had chickenpox in their youth.

While the exact cause of the condition is not known, the virus will reactivate in a person’s body and cause them to break out into a rash.

Risk of death from shingles is very low, but it can be fatal for people with weakened immune systems.

National Dentist’s Day 2022: Date, History, Significance and All You Need to Know

How do female Olympic athletes manage their periods?

Are you a functioning alcoholic? – and the signs you may need help

Why COVID-19 surveillance in Nigeria is critical: The rise and fall of variant of concern eta in western Africa