Dr Richard Horton, the editor of scientific journal The Lancet (pictured), said the risk of local spikes in Ukraine— where just a third of people are double-jabbed — during the ongoing crisis is ‘likely’

Vladimir Putin‘s invasion of Ukraine could trigger a Covid surge, the editor of a top medical journal has warned.

The Lancet’s Dr Richard Horton said the risk of outbreaks in the war-torn country – where just a third of people are double-jabbed – during the ongoing crisis is ‘likely’.

Around a third of vaccine doses administered in Ukraine were a Chinese jab that has shown to offer little protection against the dominant Omicron variant.

But the scale of any flare-ups will be nearly impossible to measure because surveillance systems will be disrupted, he said.

Dr Horton warned that crucial vaccinations against other diseases will also effectively ground to a halt.

He cautioned that the health impacts on Ukraine’s population will be severe, as safe water and sanitation facilities will be destroyed, fuelling outbreaks of other infectious diseases.

And maternity care, treatments for cancer and kidney disease, insulin supplies and mental health care ‘will be derailed’, he warned.

So far, citizens have been forced to take cover and sleep in crowded underground bunkers, while port city Mariupol has been cut off from water and power supplies for four days.

More than 1million refugees have fled since the start of the invasion, fuelling Covid outbreaks and health problems.

The UK has so far placed financial and trade sanctions on Russia and supplied Ukraine with military equipment.

But Dr Horton warned that ‘amid the talk of punitive sanctions against Russia, the basic needs of the Ukrainian people are being overlooked’. 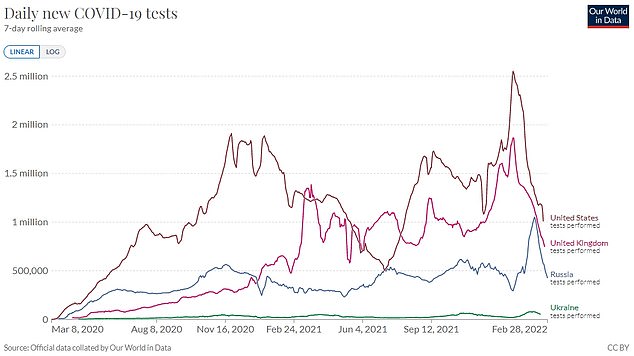 Dr Richard Horton, the editor of scientific journal The Lancet, said the scale of Covid outbreaks among Ukrainians will be nearly impossible to measure, as Covid surveillance systems will be disrupted. Health chiefs in the country have not posted any updated Covid data since last Thursday, the day of the Russian invasion. The graph shows the seven-day average of Covid tests conducted in Ukraine, Russia, the UK and US 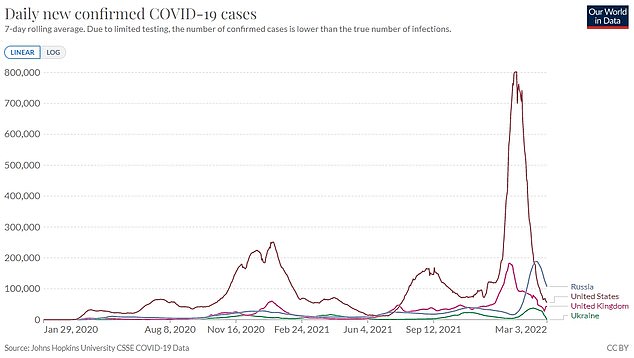 Dr Richard Horton said the risk of outbreaks in the war-torn country – where just a third of people are double-jabbed – during the ongoing crisis is ‘likely’. The graph shows the seven-day rolling average of daily Covid cases in Ukraine, Russia, the UK and US. However, Ukraine has not posted any Covid statistics since the day of Russia’s invasion 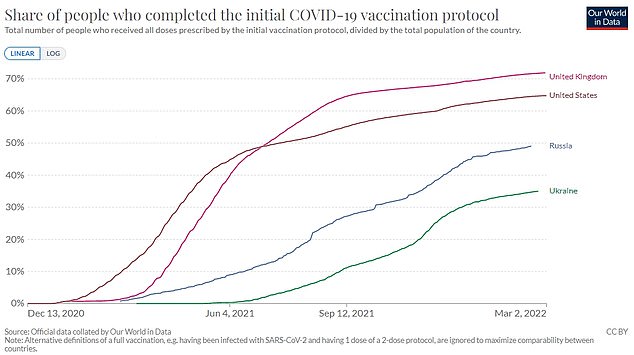 Just 35 per cent of the population were double-jabbed against Covid by February 23, the day before the Russian invasion, while just one in 100 Ukrainians were boosted. The graph shows the proportion of people who are double-jabbed in Ukraine, compared to Russia, the US and UK

Just 35 per cent of the population were double-jabbed against Covid by February 23, the day before the Russian invasion, while just one in 100 Ukrainians were boosted.

Dr Horton warned ‘in the midst of a continuing pandemic, with a population poorly vaccinated against SARS-CoV-2, the risk of local spikes of Covid-19 is likely’.

Health chiefs in Ukraine have not posted any Covid data since last Thursday, the day Russian troops entered the country.

On top of the invasion and pandemic, safe water and sanitation facilities are being targeted by Russia’s troops as part of Putin’s cruel war strategy, which ‘only adds to the danger’, he said.

Thousands of Russian scientists and journalist have condemned Vladimir Putin’s ‘senseless’ invasion of Ukraine, risking fines or even prison sentences.

In an open letter to the increasingly isolated dictator, they said there was no ‘rational justification for this war’ and warned the country was ‘doomed to isolation’.

Russian science and medicine could be left behind because of a lack of international funding as the world turns the country into a ‘pariah’ state, they claimed.

More than 6,100 academics, scientific journalists and medics have put their name to the document despite Russia’s strict anti-freedom of speech laws.

Any public criticism of the Russian state can result in fines of up to £6,200 or jail sentences, under laws introduced in 2012.

The coalition has demanded ‘an immediate halt to all military operations directed against Ukraine’.

The US has already cut ties with Russia’s space industry as part of its package of sanctions, while Germany’s biggest research funder has frozen all scientific cooperation with the country.

He added that ‘outbreaks of infectious diseases are common’ during conflicts.

Studies have previously found that Lebanon and Turkey, which took in millions of Syrian refugees, experienced an influx of hepatitis A, a liver infection spread by the faeces of an infected person, and measles cases due to the crisis.

He warned that ‘the burden of war falls mostly on women and children’, with 10million children aged five and younger having died in conflicts in the 20 years up to 2015.

‘Women and children will now be dying from preventable causes in Ukraine,’ he said.

He said Western nations, which have so far been ‘weak in both words and deeds’, must put human security on the agenda through the UN Security Council and the World Health Organization.

Russia was previously accused of bombing humanitarian camps in Syria in 2016.

Bombing in the port city Mariupol, which is usually home to 450,000 citizens, has left the local population cut off from water supplies, as well as food and medicine deliveries, since Tuesday.

And terrified citizens have filled bomb shelters and underground stations to take shelter and sleep amid fears of rocket attacks overnight.

More than 1million citizens have left the country in the last week since Russian forces descended on the country. People have fled to Poland, Romania, Hungary and Moldova.

The UK has said it will offer visas to Ukranians with family ties in Britain, but opposition parties are calling for the Government to go further and waive visa requirements for refugees.

But the Prime Minister cited national security concerns, arguing it would not ‘sensible’ to do away with checks, given that people are coming from a ‘theatre of war’.

Senior Tory MP Mark Harper yesterday warned against ditching the checks as he claimed Vladimir Putin could try to disguise Russian agents as Ukrainian refugees to gain entry to the UK and carry out a repeat of the Salisbury spy attack.

The UN has warned the refugee crisis will hit 4million in the coming weeks. For comparison, there were 1.3million refugees during the 2015 migrant crisis.

It comes as Putin’s troops attacked the continent’s largest nuclear power plant overnight, sparking a fire that raged for hours before emergency crews.

Emergency crews were eventually allowed to extinguish the flames as Russian soldiers seized the complex. Scientists have confirmed no radioactive material was released during the attack.

Boris Johnson accused Russia of ‘threatening the security of the whole of Europe’, condemning the attack as ‘reckless’.

Ramadan 2022: Roofafza to break the fast and beat the heat. Recipe inside

The truth about applying after-sun on sunburnt skin, according to the experts

International Day for the Eradication of Poverty 2021: Theme, History and Significance

International Self-Care Day: Do you know the different types of self-care?

Maximise Health Benefits By Remembering These Things When You Extract Juice

Madhuri Dixit, in a stunning blue saree, is the epitome of grace and elegance

These are the rising stars of the restaurant world

These Concierge Services Go The Extra Mile For Guests