Britain’s fourth wave shrinks again as cases, deaths and admissions all drop for second day in a row

Britain’s Covid fourth wave fell on all three fronts for the second day in a row today, official statistics showed as cases, deaths and hospitalisations all continued to drop.

Government dashboard data shows there were 84,053 positive tests over the past 24 hours, down 5.7 per cent on the 89,176 recorded last Friday. It was the third day in a row cases fell after plateauing earlier in the week.

The number of people dying with the virus also dropped by 8.3 per cent to 254, down from the 277 registered last week.

And hospitalisations continued to fall by 8.2 per cent to 1,596 on January 31, the latest date UK-wide data is available for. It was down from the 1,738 recorded the week before.

The positive trends come despite Spi-M — the modelling subgroup that feeds into SAGE — today claiming it could take another decade for the virus to become just another seasonal virus.

Omicron’s lower severity combined with Britain’s successful booster vaccine rollout has lead to ministers being increasingly confident about being able to live with Covid like the flu.

But Government advisors warned the UK is not out of the woods yet, with the threat of new variants always looming while vaccination rates lag behind around the world.

And the UK Health Security Agency (UKHSA) also estimated the R rate — which predicts how many people an infected person will pass the virus on to — could be as high as 1.3 in some areas of the country. 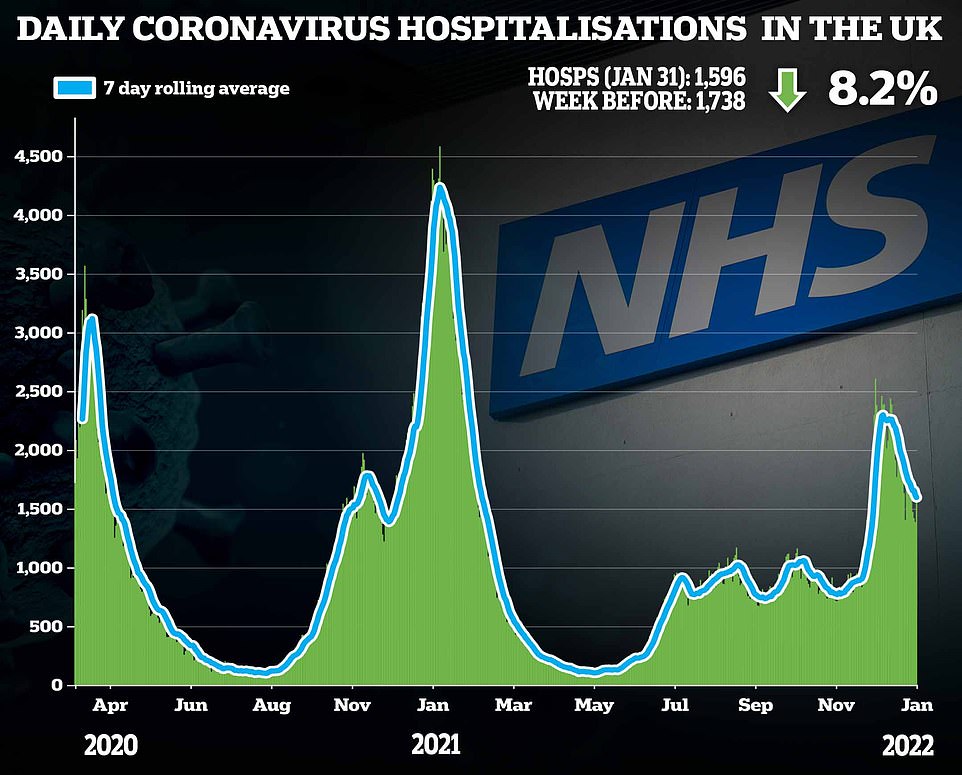 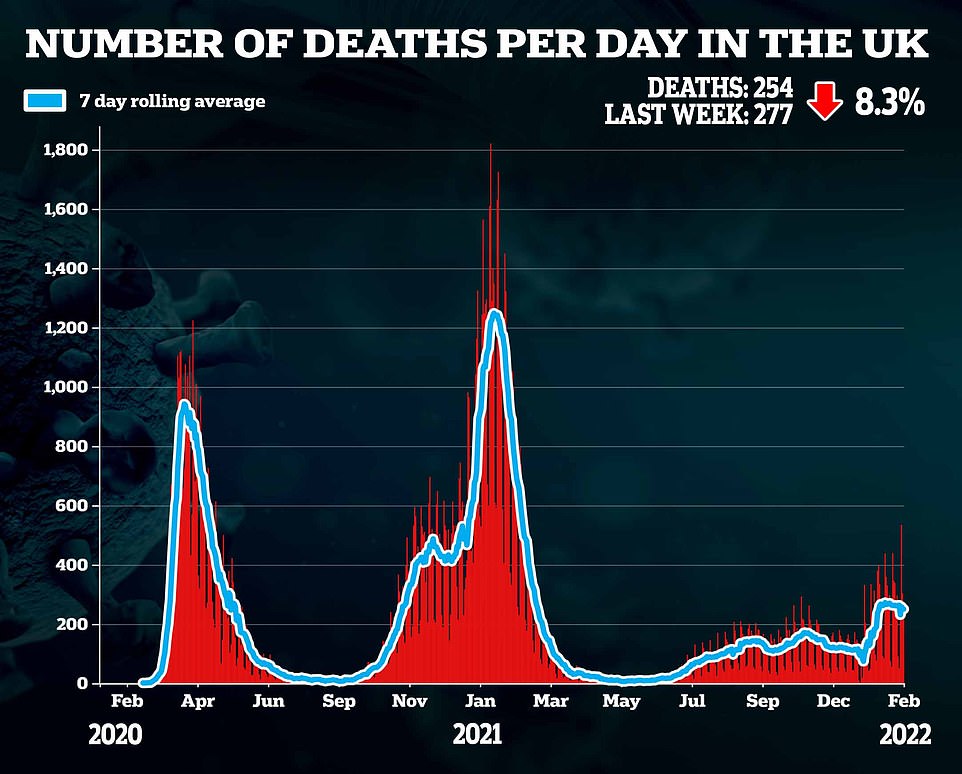 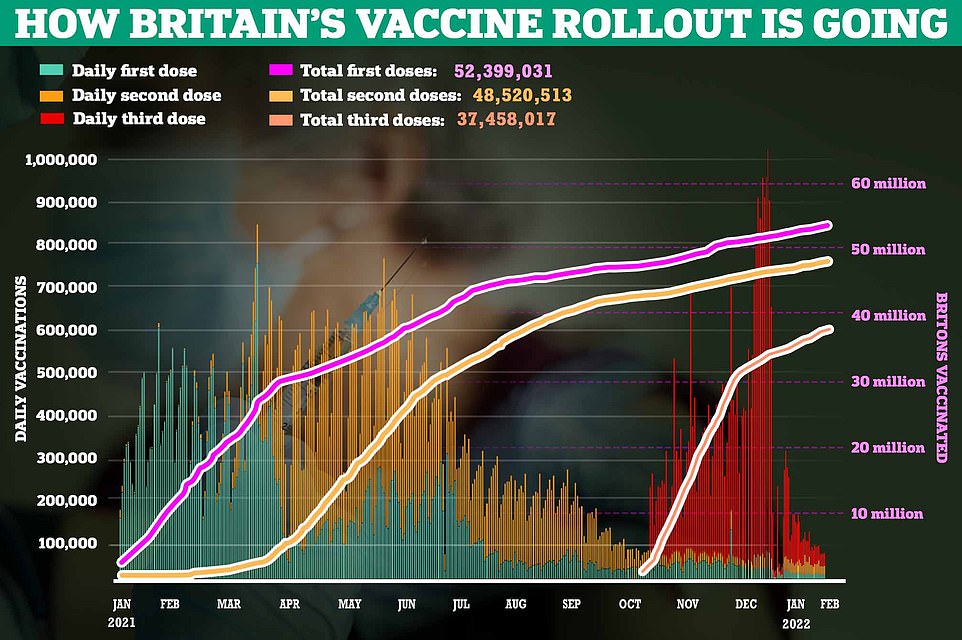 Britons who’ve had a booster jab are 93.4% less likely to die from Covid

People who have been triple-vaccinated against Covid are 93 per cent less likely to die from the virus than the unjabbed, latest official figures show.

A report by the Office for National Statistics (ONS) looked at 70,000 coronavirus deaths in England between July and December 2021.

Adjusting for age, statisticians found having two doses also reduced the risk by 81 per cent during the same period.

The period does not cover the full Omicron wave, which may influence the findings. The new variant has made two doses significantly weaker, but Omicron itself is much milder than past strains.

In the ONS report, people were classified based on how many jabs they received and whether there had been more or less than 21 days since their last dose.

The risk of dying was consistently lower every month from September for people who had a booster since third doses started being rolled out.

In other coronavirus developments today:

The dashboard data also shows a total of 52,399,031 first doses of Covid vaccine had been delivered in the UK by February 3, Government figures show. This is a rise of 13,343 on the previous day.

Last week’s figure was the lowest on record since March 2021, when the UK was in lockdown with the Alpha variant losing prominence after sweeping the nation over Christmas.

Britain’s growth rate was estimated to be between -3 per cent and 1 per cent, meaning number of new infections could be broadly flat, growing by up to 1 per cent or shrinking by up to 3 per cent every day.

However, R was estimated to be as high as between 1.0 and 1.3 in the South East, with a growth rate of as high as five per cent in the region.

It was followed by the South West (1.0 to 1.2). London, the North East and the North West had R rates with a maximum estimate of 1.0

The figure offers a snapshot of how the virus was circulating two to three weeks ago due to the time delay between someone being infected, developing symptoms and needing healthcare.

Meanwhile, the Spi-M report suggested it will take up to another 10 years before Covid has settled globally enough for the virus to be considered just another seasonal coronavirus.

Writing in a consensus statement to SAGE, the modellers said: ‘The seasonal patterns of other respiratory viruses (most notably influenza) are global.

‘Any pattern in the UK should be regarded as temporary until the global epidemiology of SARSCoV-2 has settled, which might take a decade or more depending on vaccination usage and return to travel patterns.’ 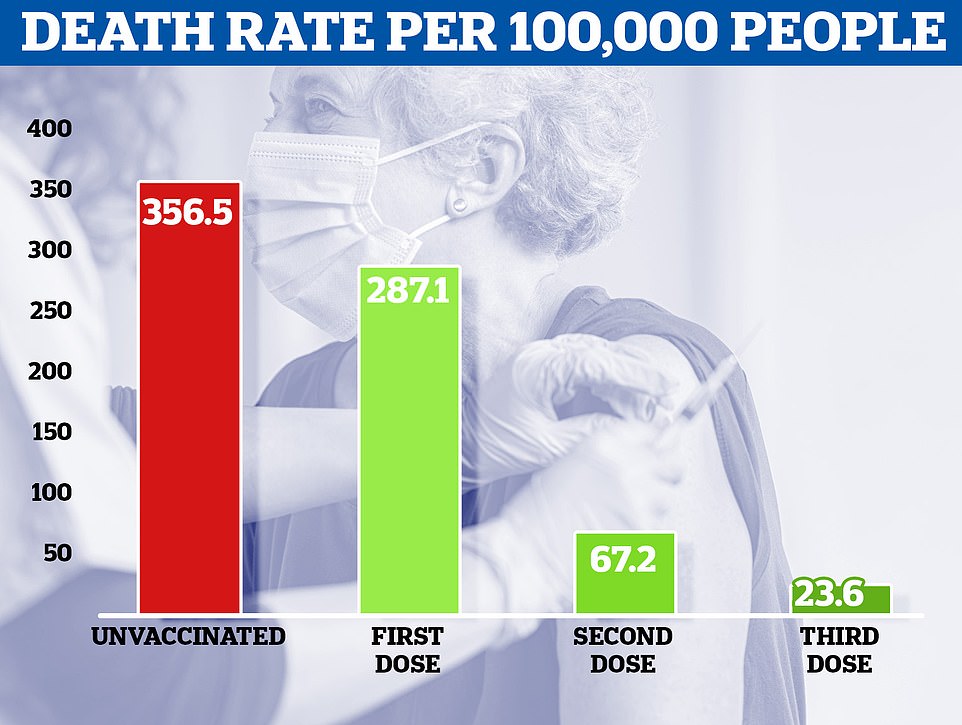 Covid vaccine booster doses reduced the risk of dying with the virus by 93 per cent in the six months up to December, Office for National Statistics (ONS) figures showed today. The death rate was 23.6 per 100,000 for the fully boosted between July and December last year, 93.4 per cent less than the 356.5 per 100,000 rate in the unvaccinated during the period. 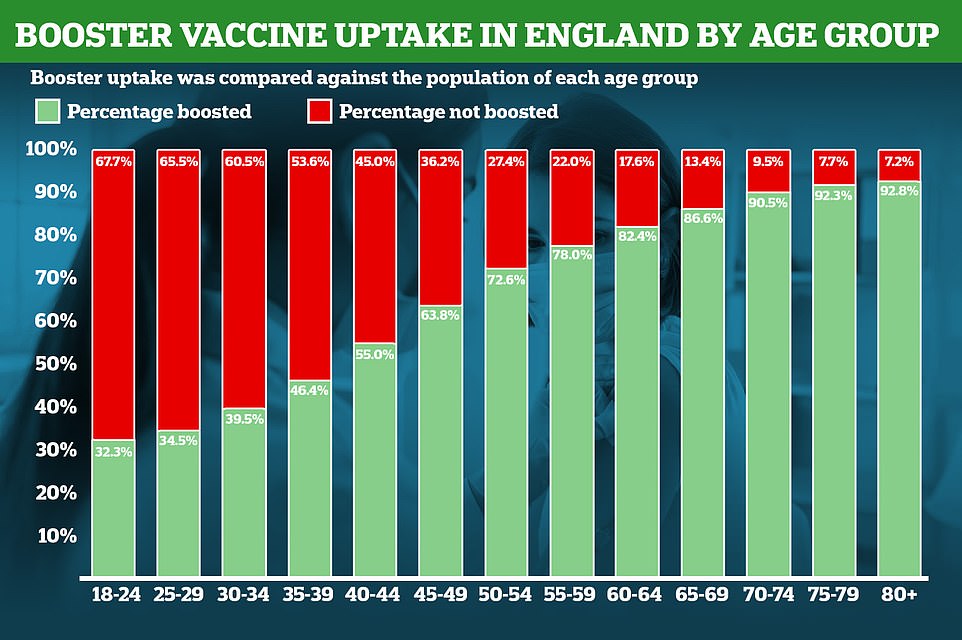 The above graph shows uptake of the booster jabs by age group, compared to whole population. All over-18s are eligible for the jabs from three months after their second dose 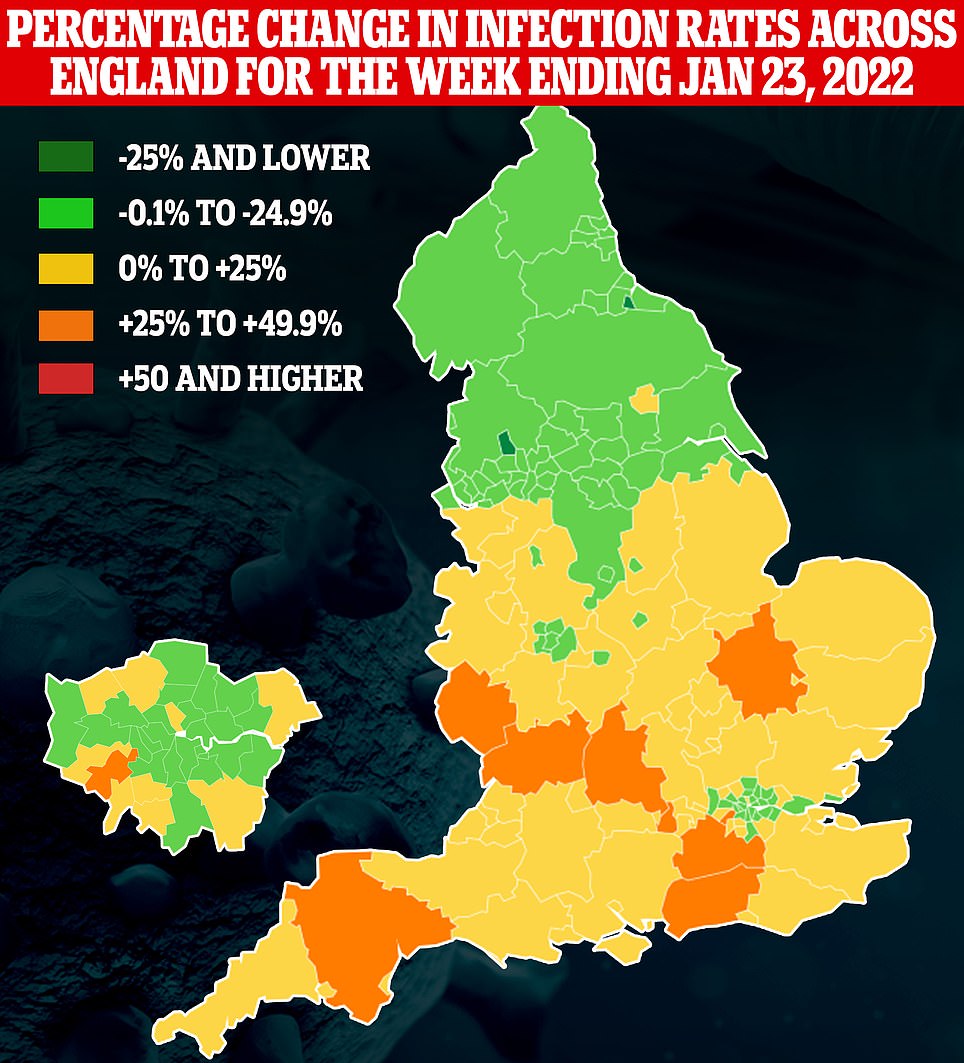 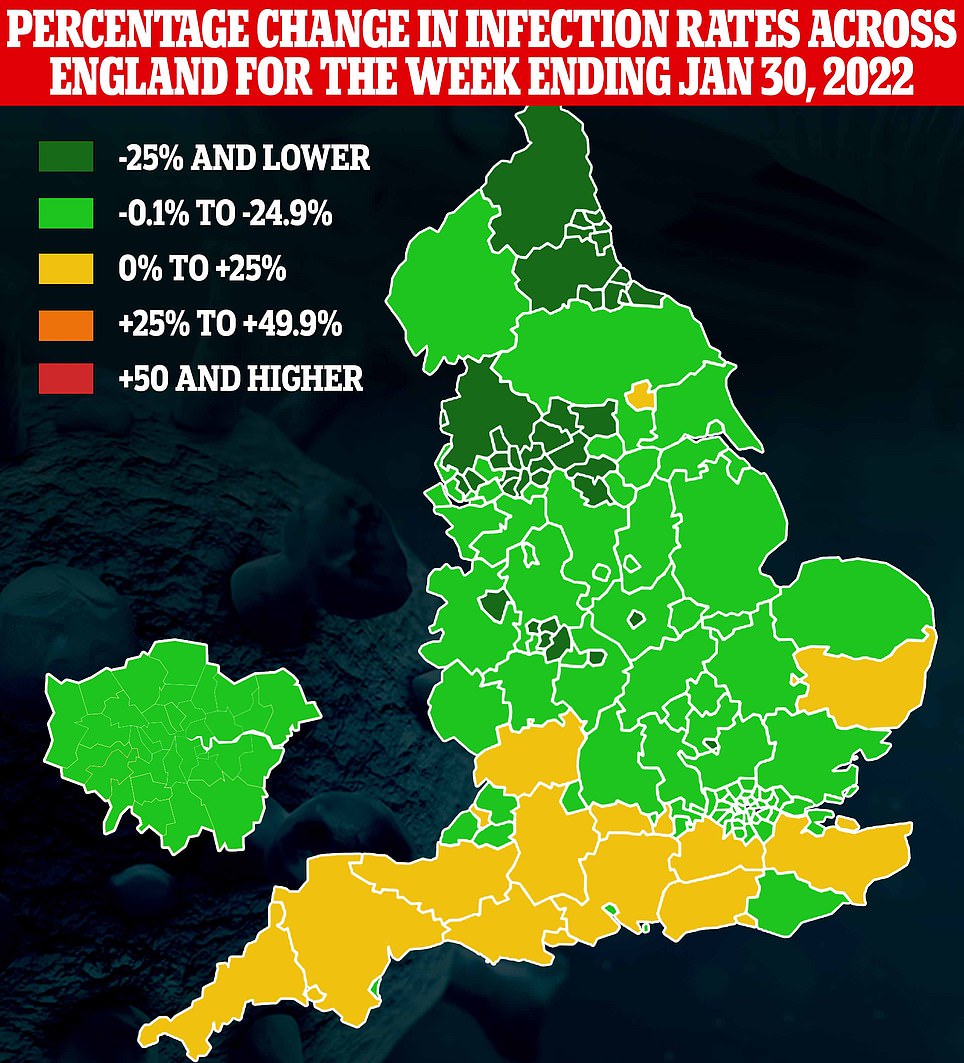 Positive tests fell in 87 per cent of England’s local authorities during the week, with all but 19 of the 149 seeing a drop-off in infections

Vitamin D may help fight off coronavirus after all, a study suggests.

The jury has been out on the ‘sunshine vitamin’ since early in the pandemic, with conflicting findings muddying the waters.

Papers that did find a link were deemed not rigorous enough and not definitive. But a new study — this time in Israel — claims to have the most conclusive evidence yet.

Previous research has been criticised for only looking at vitamin D levels when the Covid patient was already in hospital.

Being ill is known to make levels of the vitamin drop, which may have skewed findings, according to critics.

To overcome this limitation, in their latest study, researchers from Bar Ilan University and the Galilee Medical Center looked at patient records up to two years before they were diagnosed with Covid.

They found people who were consistently deficient in the vitamin were up to 14 times more likely to suffer severe disease, even after adjusting for age and other underlying health woes.

The patients were in hospital before Israel’s vaccine rollout was widespread and scientists said its findings should be seen as a green light for anti-vaxxers to turn to supplements instead.

People are still strongly encourage to get jabbed, with extra vitamin D only offering a helping hand alongside more steadfast protection against the virus.

It comes after separate official data showed one in seven young children in north-west England is likely to have had Covid during the second half of January — the highest level of infection for any age group in England since the current wave began.

Yorkshire and the Humber, the West Midlands and eastern England also saw figures close to one in seven, according to new estimates from the Office for National Statistics (ONS). Other regions were nearer one in eight, while south-west England was one in nine.

The figures reflect the surge in infections among younger age groups in recent weeks – in particular the sharp jump in the prevalence of the virus following the return of pupils to school after the Christmas holiday.

An estimated 14 per cent of two to 11-year-olds in north-west England are likely to have tested positive for Covid-19 between January 16 and 29, up from 7.6 per cent in the previous fortnight and 6.2 per cent in the two weeks to January 1.

No other age group across all the regions of England has recorded such a high positivity rate in the past few months.

Other regions ranged from 13.4 per cent in eastern England to 11.2 per cent in south-west England. Across England as a whole, 12.9 per cent — around one in eight — of two to 11-year-olds were likely to have had Covid in the second half of last month.

This is the highest level for any age group in England since the ONS began its series of fortnightly estimates in May 2020.

The ONS infection survey is the most reliable snapshot of the prevalence of coronavirus in the UK.

It is based on a representative sample of swab tests collected from tens of thousands of households, and is therefore able to estimate the percentage of people likely to test positive for Covid at any one point in time — regardless of when they caught the virus, if they have had it before and whether they have symptoms.

By contrast, the number of cases of Covid announced each day by the Government is limited only to those people who have reported themselves as testing positive for the virus, and is affected by how many people are coming forward for tests or who are taking a test because they know they have coronavirus symptoms.

Prevalence of Covid-19 among 12 to 16-year-olds in England was 7.3 per cent in the period of January 16 to 29, up from 5.6 per cent in the previous two weeks and the highest positivity rate for this age group since fortnightly estimates began, the ONS said.

How to keep stress during college from sabotaging your future

Britain’s daily increase in Covid cases is SPEEDING UP

A weeknight chicken recipe that won’t get any complaints

Women should ‘always’ be offered pain relief when having coil fitted, say experts