‘The vegan s*** is circled’: Diner blasts ‘unprofessional’ Edinburgh restaurant for handing her a rude note when she asked about plant-based options on the menu

By Latoya Gayle For Mailonline

A vegan mother has vented her fury after receiving a ‘disgraceful’ note from waiting staff at a restaurant.

Lisa Cooney, from Edinburgh, had been dining at Ravelston House in Musselburgh with family on Sunday, when she asked her server which food options on their menu were suitable for vegans.

She was left speechless when the server returned holding a menu with circled items, along with a note that dropped on to floor, which read: ‘The vegan s**** has been circled.’

What’s more, one of the options circled – nachos with cheese and sour cream – was vegetarian, but not vegan.

‘When I first read it I was in disbelief, then I was angry and upset, it’s insulting and so unprofessional, also the total disregard for any potential allergy is a worry,’  Lisa told Edinburgh Live

Lisa Cooney, from Edinburgh, has blasted Ravelston House in Musselburgh, after a server gave her a rude note (pictured) when she asked about vegan options

‘For a chef to have that mentality is quite shocking.

Lisa explained that the incident occurred while she was eating out with her family who were visiting for the weekend.

She asked the barman what options were vegan on the menu, and he went off to ask the chef.

On his return, he handed over a menu with circled items and a note which he left on the bar, that fell to the ground.

Lisa’s father picked it up, and she was shocked to read: ‘The vegan s**** has been circled.’

After the meal, she spoke to the manager who apologised and agreed the note wasn’t acceptable.’ 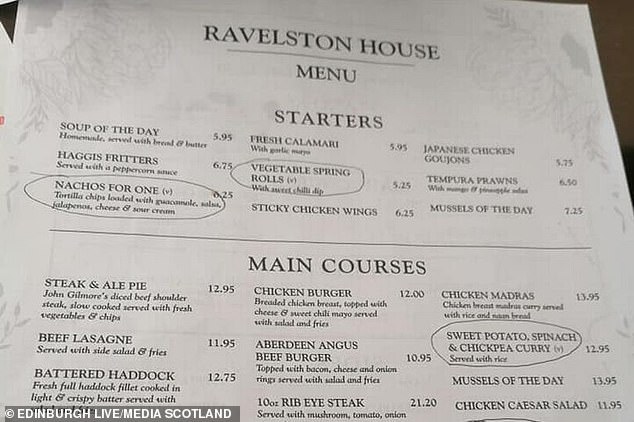 After speaking to staff, Lisa added that an assistant manager had spoken to her as they left, and was ‘much more understanding’ of the situation.

Showing support for Lisa on Twitter, one person wrote: ‘@Ravelstonhouse f****** disgrace. Shame on you. I’ll make sure my non-vegan pals also boycott you. Poor show.’

Another took to Facebook, saying: ‘Unfortunately this is most chefs’ attitude. You would think being ‘trained’ in food that they would relish the opportunity to use their creativity and knowledge of flavours and textures and should be expanding their culinary skills even further now that the world is heading towards largely plant based way of living! Boycott places like this. Plenty of vegan eateries in Edinburgh.’

A third added: ‘Anti-vegan, redneck, a** ***** exist in every country. The world is rapidly changing, but people like this will never evolve. It’s just the backward, cave-era, belligerent crowd behaving badly again. Ignore them and move forward to the future.’

Here Are The Safest Sedans, Wagons, And Minivans For 2022

Dressed to chill, Mandana Karimi steps out like this in Amsterdam

Aamna Sharif, in a white lehenga, speaks of the sound of silence

One in TWENTY children had Covid on any day last week

Are Rare Rums The Newest Alternative Asset Class For Investors

Vicky Kaushal and Katrina Kaif: This is What Vicky is Up to Before the Wedding?

Weight loss story: “I cooked my meals in ghee and did yoga to lose 29 kgs” | The Times of India

By the ocean, in a white shirt, Sharvari Wagh raises the oomph