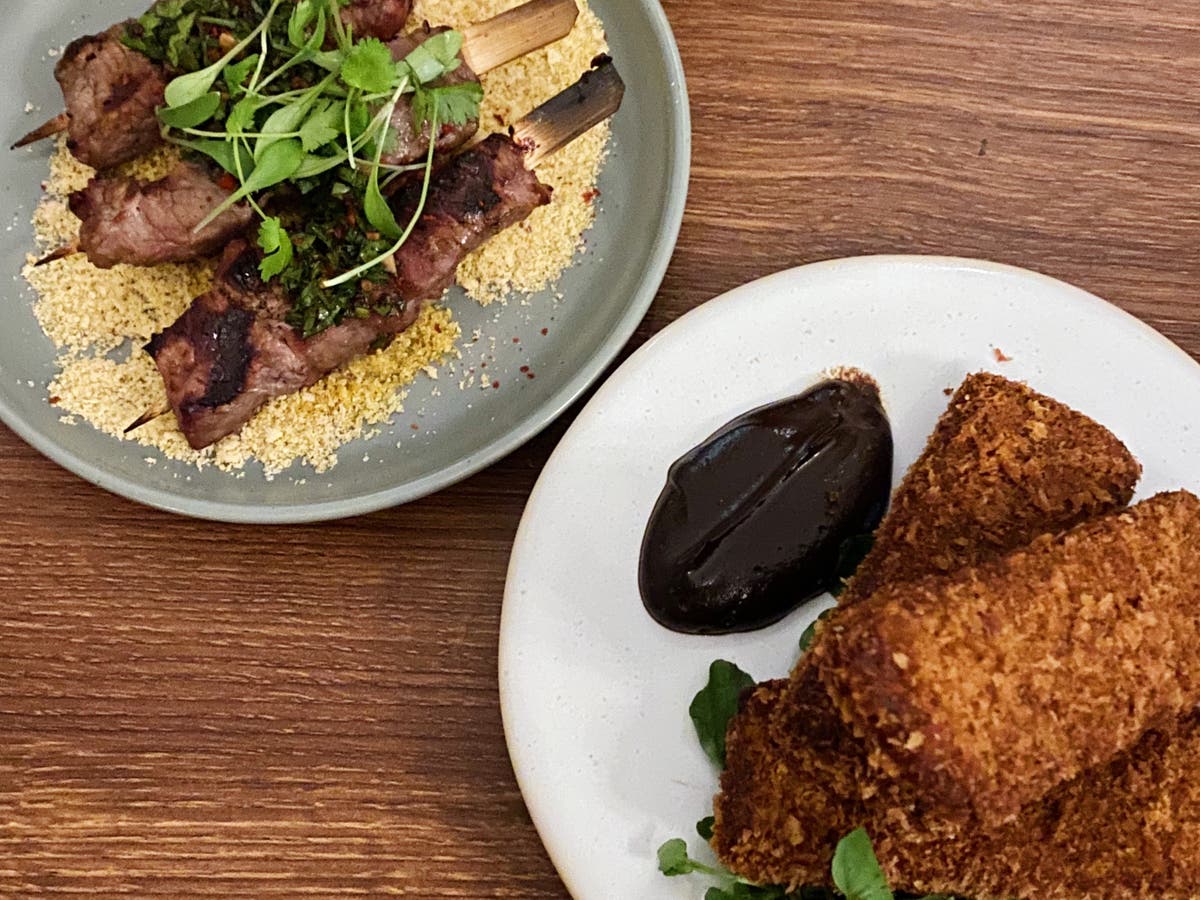 Getting a pub right is a difficult thing. Getting a pub and a subsequent dining room right is even harder. Trying to be a gastropub (shudder), is a nigh impossible task. It involves balancing potential boozers with serious diners and possibly disappointing both. A pub should, first and foremost, be a destination for an impromptu, casual beer. Somewhere you can wander into and, even if it’s packed to the rafters, still grab a crisp pint, even if you have to remain squished between the armpit and elbow of another drinker (pre-Covid, of course). Some serve food, some want to make a bit of an event of this food, and others let the food swallow the entire thing whole.

The Jolly Gardeners has toed this line wonderfully, splitting the space in two, diners on one side, pint drinkers on the other, the two intermingling with a convivial feeling that one could become the other and vice versa. The buzzy chatter from the pub side doesn’t overwhelm you when you’re sitting down – instead it provides a joyous backdrop for your meal.

This is the kind of pub you would want at the end of your road. It feels like the type of spot where a BBC drama about the rotating lives of young adults might take place – the Central Perk of Vaxhall’s twenty and thirty-somethings. You could come here with your flatmates for a much-needed post-work drink. You could bring a first date, sussing out your compatibility over craft beer and small plates. You could drag along visiting parents for a Sunday roast. It encapsulates everything you could want from a good local, and no doubt the residents of Vauxhall are all the better for it, especially as the area isn’t exactly drowning in good places to eat.

The Jolly Gardeners as a concept was conceived over lockdown. While many other hospitality outlets were desperately trying to stay afloat and sometimes shuttering their doors permanently, these five friends were planning the potentially insane idea of opening a pub. The perfect opportunity presented itself in the way of The Zeitgeist, a forgotten spot that had been struggling for a while. Apparently, the German-influenced boozer had red walls, black ceilings and served a steady selection of schnitzel. The Jolly Gardeners pays homage to that history with their monkfish schnitzel – an inspired take on the classic dish that sees the meaty fish breaded and fried and served with frazzled capers for a salty, crunchy hit, and a herb-packed potato salad. It serves as a reminder that sometimes the classics really are the best. Wow, it was good.

I am jumping a bit ahead though, as by the time the schnitzel arrived we were incredibly full after scoffing down a number of the small plates that make up the bulk of the menu. Seasonality is at play at the Jolly Gardeners: the dishes change weekly, adapted to the produce they can source and the ingredients that are flourishing in that moment. Unsurprisingly, a few dishes have become firm favourites, like the aforementioned schnitzel, as well as the cauliflower wings, and therefore tend to remain fairly regular.

This is, for all intents and purposes, pub food. But it’s pub food you want to eat. I hate using the term “elevated” to describe something, but it’s fitting here. The Jolly Gardeners has elevated pub food, without making it pretentious. It’s almost like they’ve specialised in it; finding excitement in what often ends up being standard, stodgy fare. Here, that sees itself imagined in dishes like lamb scrumpets – slow cooked lamb that is shredded, crumbed and then fried – into a highly meaty croquette. It’s like the English sibling to Smokestak’s crispy ox cheek. Steak skewers were tender and slightly charred on the outside, set on a bed of cassava and covered in a vibrantly herby chimichurri. Samphire and green onion bhajis were crispy, just the right level of oily and perfect when hoovered up with the accompanying mango chutney. The cauliflower wings are a menu staple for a reason. This is one of those dishes that would convince even the most veg-sceptic of diners. Cooked to a crisp – if they were any darker they’d be burnt, but they end up being just right – the crunch from the outer layer adds a necessary chewiness, while the cauliflower has softened but retained its integrity, pulling apart with each bite, much how you would expect a chicken wing to do. Cod’s roe was just on the wrong side of salty – a little less seasoning would have allowed the punchy savouriness of the roe to shine, rather than being overwhelmed.

All of this was consumed in a space reminiscent of the dining room at St John – all white walls, high ceilings and old-school floorboards. You would never have known this used to be a dark, dreary, stein-swilling old boozer of a place. The five mates who set up the Jolly Gardeners have over 60 years of experience in the hospitality industry between them, and you can tell. Whether you’re schlepping to Vauxhall to check it out for yourself, or happen to live at the top of the road (lucky bugger), there should really be more of these kind of spots in London. I’ll be back: apparently their Sunday roast is something write home about.

This week’s food and drink news

Dai Chi to open in Soho

I walked past Angelina’s in Dalston almost every day during lockdown, and nearly every time they were inside beavering away preparing meals for people who needed them in the community. They are now opening a new Japanese-inspired kushikatsu restaurant in Soho, that will focus on the Osaka-based dish of deep-dried food on sticks (have you ever heard of anything so wonderful?!) I’m sure the food will be great, but you should definitely go find out for yourself to make sure.

Bookings are opening soon for what is sure to be Mayfair’s new grand dame – the MAINE. Found in a lovingly restored 18th-century townhouse on Hanover Square, the enormous space will feature five rooms, three floors and a hidden courtyard. One to note down for when you’re feeling flush and fancy an indulgent hour (or three).

It’s spooky season! And while I regrettably will not be dressing up this year, I will be indulging my halloween fantasies with Beavertown’s limited edition Flesh lager and Bones black lager – yes, it truly is inky toned. The perfect beverages to drink this weekend, I’m hoping they’ll keep me well hydrated while I hide in the back room of my house and try to pretend I’m not should any trick or treaters come by.

Smith’s launches meatlovers pizza flavoured Twisties – so would you try it?

Crockers Henley: A foodie getaway in a league of its own

Parenting mistakes to avoid while raising a shy child

Vicky Kaushal sets fashion goals higher in a white kurta and a scarf. How did he do it?

Gold-based cancer therapy could face competition from other substances

Only alcohol — not caffeine, diet or lack of sleep — might trigger heart rhythm condition

May Mobility Already Is Ahead, Even As ‘Tortoise’ Of Driverless Vehicles

Hunting for a new handbag? 5 essential autumn/winter trends to know about