Panera has officially entered the chicken sandwich chat – a whopping three years after Popeyes first turned the fast food item into a viral sensation when it launched its now-infamous version in the summer of 2019.

Clearly eager to hit the ground running, or clucking, Panera is bringing not one, but two varieties of chicken sandwich to the table: a ‘signature take’ and a ‘spicy take’, both of which will retail for $11 each when they hit cafes across the country on March 30.

According to Panera, while its sandwiches are certainly pricier than the versions offered by many of the country’s major fast food chains, the company insists that their offerings are ‘worth’ the additional money.

Still, the eatery’s chicken sandwiches will face some stiff competition from the much-loved fast food alternatives found at the likes of Popeyes, KFC, Burger King, McDonald’s, and even Taco Bell – all of which have been engaging in the ‘chicken sandwich war’ for months. 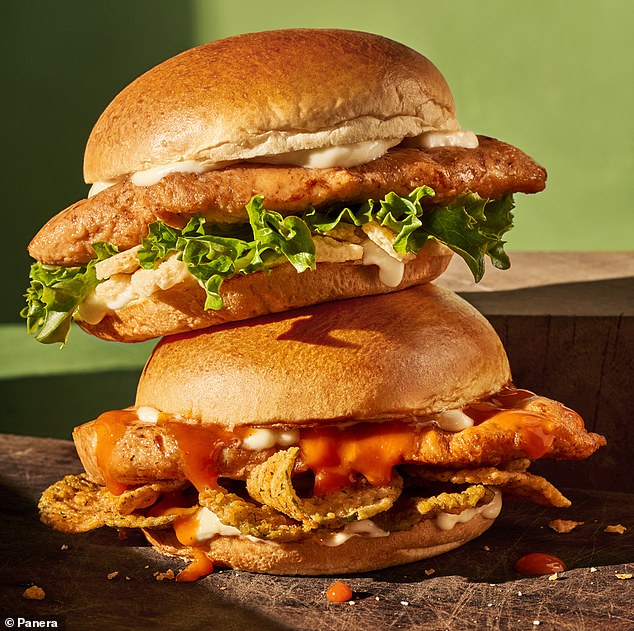 On March 30, Panera cafes across the country will begin selling a ‘signature’ and a ‘spicy’ chicken sandwich, both of which will retail for $11 each

The first of the sandwiches – christened the ‘Signature Take’ – is aimed at those who are on a ‘hunt for a new and improved version of the chicken sandwich they know and love’, according to the eatery.

It is made with a chicken filet, garlic aioli sauce, parmesan crisps ‘for added flavor and crunch’, and leafy greens, all of which are sandwiched in a brioche bun.

Meanwhile, for those keen to get an extra kick from their sandwich, there is the ‘Spicy Take’, which features spicy cucumber crisps instead of the parmesan found in the milder signature version, as well as spicy buffalo sauce for some added heat.

‘The chefs at Panera aimed to redefine the chicken sandwich we have all grown accustomed to beginning with its core,’ a statement from the brand reads.

‘Panera marinates the quarter pound of 100 per cent all-white meat chicken breast filet in a rich, savory chicken broth and finishes by seasoning the filet with Panera’s Signature spice blend.

‘Each filet is topped with spicy crunchy topping, either pickle crisps or parmesan crisps all thoughtfully stacked between a buttery brioche bun that is sealed with a proprietary umami-rich garlic aioli sauce – designed to deliver a chef’s kiss with each bite.’

Panera’s announcement comes more than 24 months after Popeyes launched an all-out fast food war with the launch of its first-ever chicken sandwich in summer 2019.

In the months since then, a slew of fast food chains have tried to jump on the chicken sandwich bandwagon, with even Taco Bell joining the fray in February of last year when it released a taco version of the menu item.

Popeyes’ sandwich first hit stores in early August 2019, marking the first time in the company’s then-45-year history that it had added a chicken sandwich to the menu on a nationwide level. 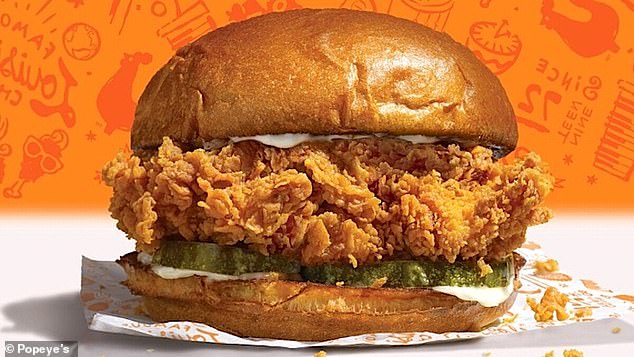 Flashback: Popeyes sparked chaos in the US with its first ever fried chicken sandwich in the summer of 2019 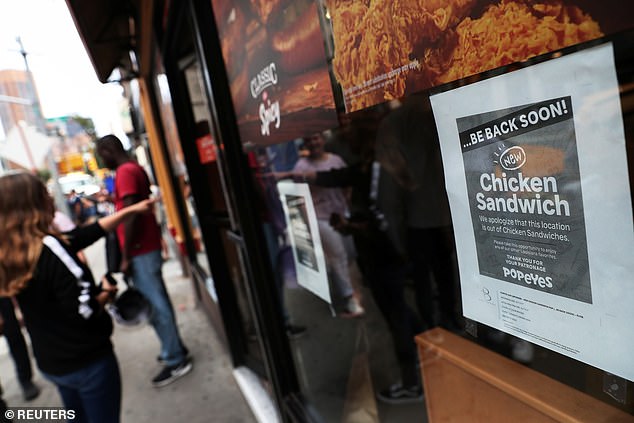 Must-have: The sandwich sold out in weeks and didn’t return until November of that year (pictured: a NY location in August 2019) 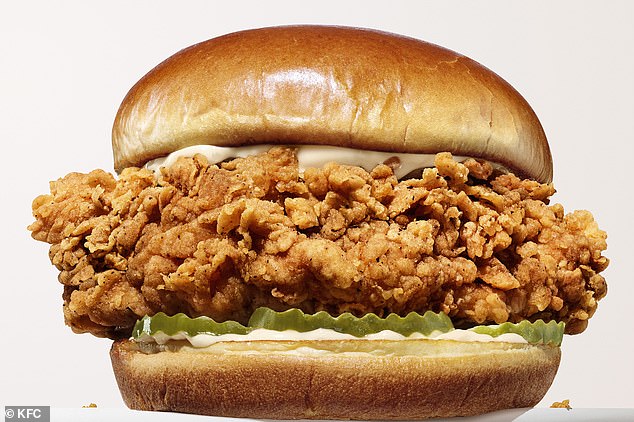 Since Popeyes launched its chicken sandwich, a slew of other fast food chains have joined the fray by launching their own versions, including KFC (pictured)

The sandwich earned so much attention that other fast food chains, including Wendy’s, Chick-fil-A, and Shake Shack, immediately began feuding on Twitter over which restaurant’s version is the best.

Popeyes’ sandwich earned even more buzz when restaurants couldn’t meet the demand and sold out in less than a month, leaving some customers throwing fits, attacking employees, and even suing the chain.

Furious food fans took to social media to complain that they couldn’t get their hands on the menu item, begging Popeyes to restock.

In late August 2019, an irate Popeyes customer climbed through a drive-thru window before brawling with three employees when he learned the sandwich was sold out.

And Craig Barr, of East Ridge, Tennessee filed a $5,000 lawsuit against the fast food chain alleging false advertising’ and ‘deceptive business practices’ by the company because he couldn’t get his hands on their famous chicken sandwich.

By early November on 2019, Popeyes’ sandwich was back in stores, and has remained a staple on the chain’s menu.

Meanwhile, other fast food chains have scrambled to update their own fried chicken sandwiches to get in on the action.

In January 2021, KFC debuted its ‘best chicken sandwich ever,’ a quarter-pound double-breaded Extra Crispy chicken breast filet on a brioche bun with pickles and mayo or spicy sauce.

‘We tested the new KFC Chicken Sandwich in Orlando last spring, and we nearly doubled our sales expectations, so we knew that we had a winner,’ Andrea Zahumensky, chief marketing officer for KFC U.S., said in a press release at the time. 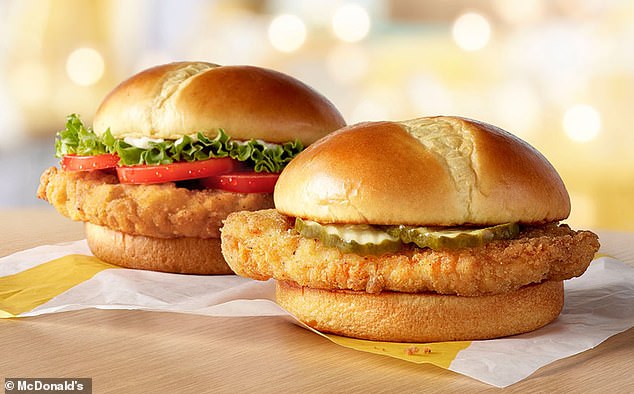 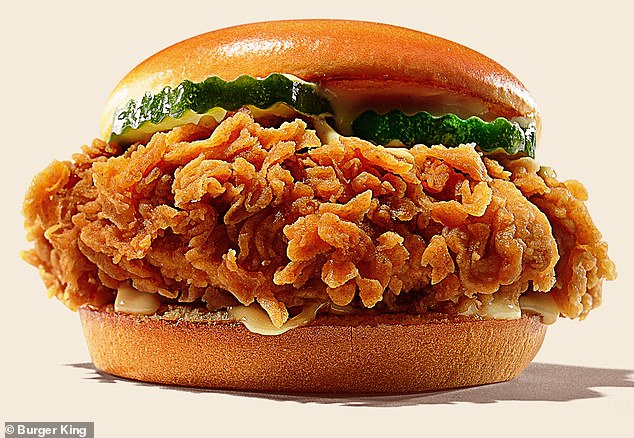 Yum! Burger King announced in February 2021 that it would be introducing a hand-breaded chicken sandwich, revealing it had been working on perfecting the recipe since 2019 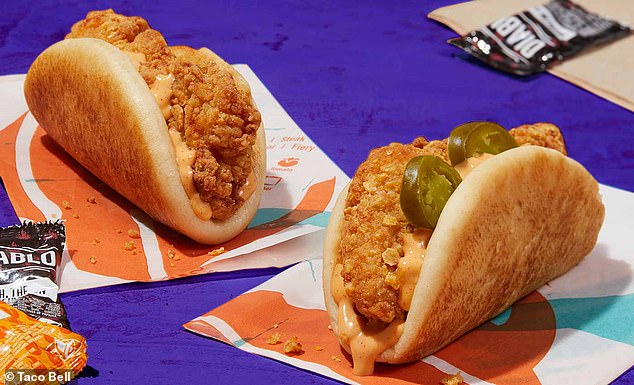 Yum! Taco Bell announced in February 2021 that it was testing its own version of a crispy chicken sandwich — the Crispy Chicken Sandwich Taco

‘Many customers hadn’t considered KFC as a part of the chicken sandwich conversation, but anyone who tastes this sandwich will know, without a doubt, that we’re playing to win.’

That same week, McDonald’s confirmed its plans to launch three varieties of a new crispy chicken sandwich — ‘classic,’ ‘deluxe,’ and ‘spicy’ — on February 24, 2021.

However, McDonald’s had already dipped a toe into the fried chicken fray at that point, when it added a different type of fried chicken sandwich to the menu in January 2020: breakfast sandwiches.

Burger King finally threw its hat into the ring in February 2021 when it unveiled its own brand new fried chicken sandwich, which it promised is ‘just as good as one you could get from the big chicken guys.’

‘What if hand-breading were to chicken what flame-grilling is to burgers? That’s been our guiding filter to bring a delicious chicken sandwich to guests in a way only BK can,’ said Ellie Doty, chief marketing officer, Burger King North America.

‘We’ll take the time to get it right and our guests will definitely taste the difference.’

The sandwich had been in the works since 2019, the chain claimed.

It’s made with hand-breaded white meat chicken a potato bun, pickles, and signature sauce, and can be ordered regular or spicy.

Think you’re the next food star? These entrepreneurs want to hear about it

Mokshada Ekadashi 2021: Date, Time and Significance of This Day For Devotees

Easy-to-make healthy sandwich recipes for your little one

‘Was Important to Stay Till the End’: Suryakumar On His Watch-winning Knock Against Windies in 3rd T20I