How to barbecue fish perfectly every time 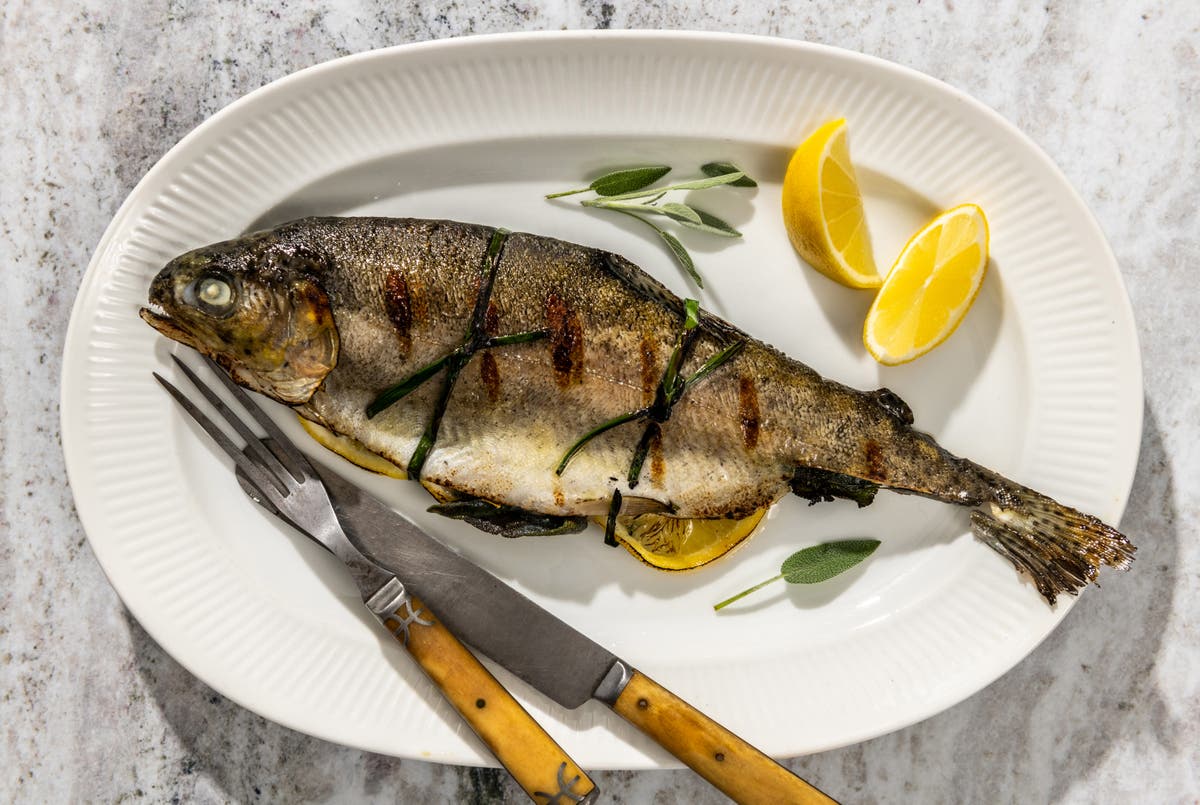 Fish sticks. And that can be especially problematic when you’re cooking fillets or whole fish on a barbecue. If you’ve ever watched helplessly as your prized protein slips through the grate – a sacrifice to the hot coals below – you will understand.

“When you’re cooking fish, whether you’re inside or outside, you’re always thinking about sticking,” says Dan Zuccarello, executive food editor for cookbooks at US TV show America’s Test Kitchen.

Barbecue expert Elizabeth Karmel agrees, adding, “All protein sticks to the hot surface until it naturally releases itself when it is cooked. Fish just happens to be less resilient, more delicate.”

Armed with a fresh fish, the right tools and a little knowledge, Karmel and Zuccarello say, anyone can become a proficient barbecue griller. Here’s how to get started.

Grill brush (Note: It is best to use a coil brush for this – one without bristles. Stray bristles from wire brushes can break off and get into food)

Paper towel or a soft cloth

One or two thin metal spatulas, such as fish spatulas

Instant-read thermometer and, if using a charcoal barbecue, an oven/grill thermometer

The next step is preparing your grill. A clean grate, free of any charred, cooked-on food is essential.

That doesn’t mean you have to scrub it back to shiny newness, says Karmel, who advises washing the grate with soap, water and a sponge, if necessary. “The more you use your grill the better seasoned it is,” she says. “If you have some nice built-up seasoning that will help prevent sticking.”

If you have the presence of mind to scrape away cooked-on residue after each use, that’s great, but Zuccarello says he’s usually too busy digging into the feast with family and friends. So, he cleans the grill before each use.

“When the grill grate is hot … that’s the best time to clean because the warm barbecue grates will let go of whatever is stuck on them more easily,” he says.

“Our go-to method for a gas grill is turn all the burners on high for 15 minutes – or longer. For a charcoal, in general, once you put the hot charcoal in and then cover it, you can heat it for about five minutes.”

Then he uses a barbecue brush to loosen stuck-on particles. If you don’t have a grill brush, you can use balled-up foil and long tongs. (Note: If your grate has lot of bits and pieces stuck on, get the barbecue very hot, cover it and let it sit for about half an hour or until the grates are covered in white ash before cleaning.)

Zuccarello and Karmel disagree about the next step.

Once the barbecue is free of any debris, Zuccarello folds several paper towels or a cloth into a compact square and dips it in neutral oil. Then, using long-handled tongs, he vigorously wipes the grate until well-oiled, repeating as needed. He oils the fish as well before grilling.

“If the grill grates are hot, then you’re burning the oil immediately,” she says. “It becomes sticky like glue, so then you’re gluing your food to the cooking grate instead of keeping the juices inside while the outside gets nice and caramelised and brown.”

(We tried both methods and found that, if the barbecue grate is properly cleaned, oiling the fish alone did the trick. But we also found that lightly oiling the grate did not cause any major issues.)

If you’re new to barbecuing fish, experts advise starting with meaty, firm fish steaks at least half an inch thick, such as swordfish, mahi mahi or tuna. Salmon, which is flakier, is also a good starter fish, because thicker fillets are common and it is oilier, meaning it brings its own “non-stickability”, says Zuccarello.

Start by rubbing the fish well with oil and then lightly salt and pepper. You can grill the fish steaks on direct heat until they are done to your liking. Then, add flavour tableside by serving them with a herby sauce or aioli.

Karmel and Zuccarello agree: leaving the fish in place long enough for the exterior to caramelise will allow it to lift off more easily. If you must flip the fish, slide a fish slice between it and the grate to check that the fish releases easily. If you feel resistance, give it 30 seconds or a minute more and try again. Turn the fish by gently pushing the fillet to roll it over.

Barbecue the fish longer on the first side to allow it to develop a sear. And if you are cooking with the lid closed, which is recommended, the second side will partially cook while the first side is on the grate, cutting cooking time.

With flakier varieties, cooking the fish whole is safer. If you want to grill fillets, skin-on helps to lessen sticking. Place the fish fillet skin-side down, perpendicular to the grates. Then, cover the grill and cook it as directed until the skin is browned and the fish releases easily when lifted with a thin, metal fish slice.

Karmel almost always recommends indirect heat and a longer cooking time because she doesn’t want to dry the fish or scorch its oils.

No matter which kind of fish you get, the most important thing is that it must be fresh.

“If it smells like nothing or a little bit like salty seawater, it’s fresh,” says Karmel. If, however, it smells fishy or like ammonia, don’t buy it. Fish should have shiny skin and, if whole, clear, not cloudy eyes. Another option is to buy quick-frozen fillets, which are from fish caught and frozen immediately, she says.

Consider planks or a skillet

For an even easier method, Karmel suggests using a barrier between fish and grill.

“The way to get people to grill more and more is to ensure that their first experience is fantastic,” she says. That’s why she recommends a cedar plank. The planks, available in well-stocked grocery stores and online, must be soaked for about 30 minutes before grilling.

“Add olive oil, salt, pepper and the lemon slices on top and put it on a cedar plank,” she says. “It makes a beautiful presentation and tastes great.”

Zuccarello prefers barbecuing directly on the grate, but for really thin fish fillets, he will pull out a cast-iron skillet, add a bit of oil and heat it on the grill so he can cook the fish just as he would on the stovetop.

To add smokiness, he adds a wood chip packet. After soaking the chips in water for about 20 minutes, he puts them on a 25cm x 30cm piece of foil and folds it to make a 8cm x 15cm bundle.

He cuts three slices on the top of the packet and puts it on the charcoal or directly atop the burner. As the chips heat, they release smoke.

Both Zuccarello and Karmel eschew barbecue baskets for fish: “You’re going to have just as much possibility of sticking on the basket that you do with the grill grate,” says Zuccarello.

How to tell if it’s done

Generally, fish should have an internal temperature of at least 63C, and the flesh should be opaque and flake easily with a fork, according to food.gov.uk

“You will become a better cook the minute you buy an instant-read thermometer,” says Zuccarello, noting that using one means not lifting or cutting the fish or relying on visual cues, such as noticing if the fish is beginning to flake and lose its translucency.

If you don’t have one, “there are a lot of visual clues”, says Karmel. “For example, salmon completely changes its colour – all fish does. It goes from a transparent colour to more of an opaque colour when it is done. With salmon, the collagen strips turn white.”

She also recommends doing a finger test to see if the fish feels firmer than it did when it was raw.

Want to try your hand at a few fish barbecuing techniques? Here are five methods to try.

A small whole fish: You want to select a smaller fish, about 680g, such as a red snapper or the trout used in this recipe, Zuccarello advises. Use a sharp knife to slice the fish open like a book. Then, lay it flat on a cutting board, skin side up. Brush generously with olive oil and flip it over. Spoon the herb mixture over the inside of the trout, then stuff the fish with very thin lemon slices and whole herb leaves. Sprinkle with salt and pepper. Fold over one half of the fish to close. If you’re concerned about the fish popping open, use long chives or sturdy twine to hold the body closed.

A meaty fillet directly on the grill: This recipe from Mike Lang’s One-Beer Grilling cookbook, calls for a meatier fish – in this case sea bass. The grill is heated, the fish rubbed with oil and then placed flesh-side down directly on the grill. The fish grills until it begins to flake, about seven or eight minutes, then it’s flipped and cooked for another five minutes or so. He adds courgette to the grill halfway through for a complete grilled meal.

On a plank: Karmel recommends this method for newbies. You can buy planks at organic grocers and other stores, as well as online. In this recipe from Red, White and ‘Que: Farm-Fresh Foods for the American Grill, by Karen Adler and Judith Fertig, you cut the fillet to fit the size plank you have. Do not allow any fillet to hang over the edges. Place it skin-side down. Spread the aioli evenly over the top and sides of the fish, then cover it with salsa verde. Place the plank on the indirect-heat side of the grill. Then, close the lid and cook for about 20 minutes – no flipping – just until the fish begins to flake in the thickest part when tested with a fork. We had leftover aioli or salsa verde that we served tableside.

On top of sliced citrus: This recipe and technique come from cookbook authors Bruce Weinstein and Mark Scarbrough. Here, you lay a bed of thin citrus slices across the grate before you add the fillets. You close the lid and let the fish cook, with no flipping. Try it with lemons, limes or oranges, or mix and match. If you’re afraid of the slices falling through the grate, you can do this in a grilling basket.

On top of vegetables: This recipe from G Daniela Galarza is a similar idea to the citrus. It also requires no flipping: Place the asparagus in a single, tight row perpendicular to the grill grates, creating a little raft. Then lay the salmon, skin side down, atop the asparagus. Close the lid of the barbecue and let the fish cook without moving it. If you want char marks on the fish, you’ll have to move it to the hot grate before serving.

Are you an overthinker? Psychologists explain how to get out of your head

Greenwich, Connecticut, Gets A First-Rate Steakhouse And Italian Restaurant All In One At Macelleria

Have You Ever Tried Retinol? Here’s All You Should Know About the Serum