Top chefs have led the backlash against the government’s plans to introduce calories on menus in restaurants and cafes, saying it’s ‘dangerous’ to have guests pick a meal ‘based on a number’ rather than ‘taste and nutrition’.

MasterChef: The Professionals winner Sven-Hanson Britt, who runs the Oxeye restaurant in central London, said the Department of Health’s plans to force eateries to put calories on menus is ‘a waste of time and money’ and ‘our national obsession with calories isn’t healthy’.

He added the law could ‘end creativity, spontaneity and lead to boring tick-box cooking’.

Other top chefs including Michelin-starred Paul Foster and Simon Wood slammed the plans, branding them ‘bloody awful’ and ‘ridiculous stupidity’.

From Friday, restaurants, takeaways and cafés with more than 250 employees will have to put calories on their menus.

The Department of Health claims this is to help consumers make ‘healthier decisions’ and as well as encouraging businesses to offer lower calorie options – but critics say it’s a lot more complex.

MasterChef: The Professionals winner Sven-Hanson Britt (pictured) who runs the Oxeye restaurant in central London, said the Department of Health’s plans to force eateries to put calories on menus is ‘a waste of time and money’ and ‘our national obsession with calories isn’t healthy’.

Some chains – including Wetherspoon’s – already have calorie information on menus, other big restaurants and cafes including Starbucks and Greggs have calories information easily available online but not printed on the menu.

Taking to Twitter this week, one woman called Imogen, shared a picture of the menu from The Vine pub in Kentish Town, showing Sunday Roasts with calorie counts next to them.

‘Served this menu at the weekend – 2,621 calories for a roast. This can only be bad for business and customers,’ she said.

Her view is shared by many in the hospitality industry, with many reiterating research that showed calorie-counting isn’t helpful in combating obesity and ‘education about nutrition’ is more important.

At Wetherspoon’s many items are more than 2,000 calories, including the BBQ ribs with onion rings which is 2020 calories.

While the NHS recommends 2000 calories a day for women and 2,500 for men – this guide has been widely criticised by nutritionists and scientists who have called it a ‘made-up number‘ with every person varying significantly in how many calories they need.

Leading the charge against calories on menu is Sven-Hanson Britt, who wrote in a series of tweets: ‘Calories on menus this week guys. The law kicks in for “large hospitality businesses” to display calorie info on menus. What a terrible, terrible thing to happen to the hospitality industry and a waste of time, money and a potential danger…

He added: ‘”Calorie labelling on menus is designed to give the consumer the most ‘informed decision’ possible and hopes to aid the reduction of obesity.” Say the gov – sure.  But only if it’s accurate.

‘This could end creativity, spontaneity and lead to boring tick-box cooking. 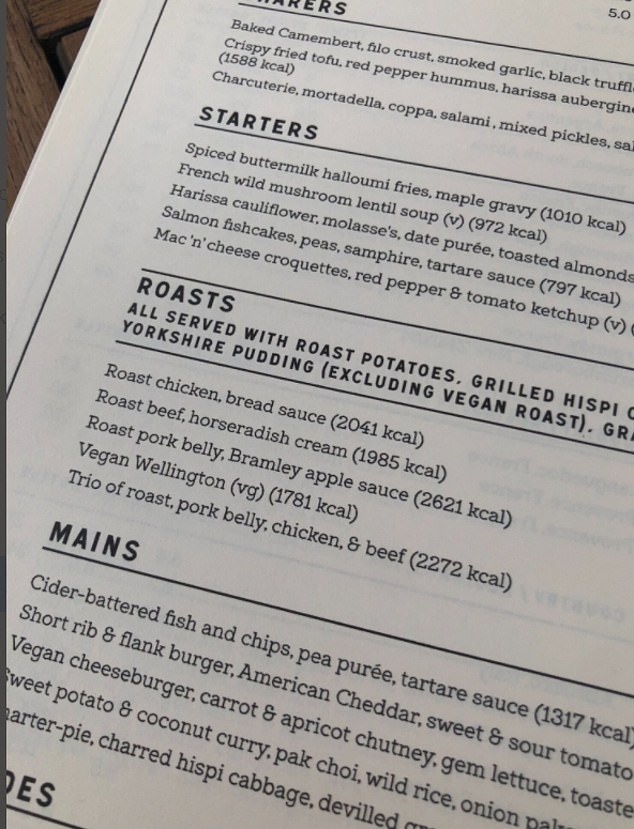 Taking to Twitter this week, one woman called Imogen, shared a picture of the menu from The Vine pub in Kentish Town – showing Sunday Roasts with calorie counts next to them. ‘Served this menu at the weekend – 2621 calories for a roast. This can only be bad for business and customers,’ she explained. 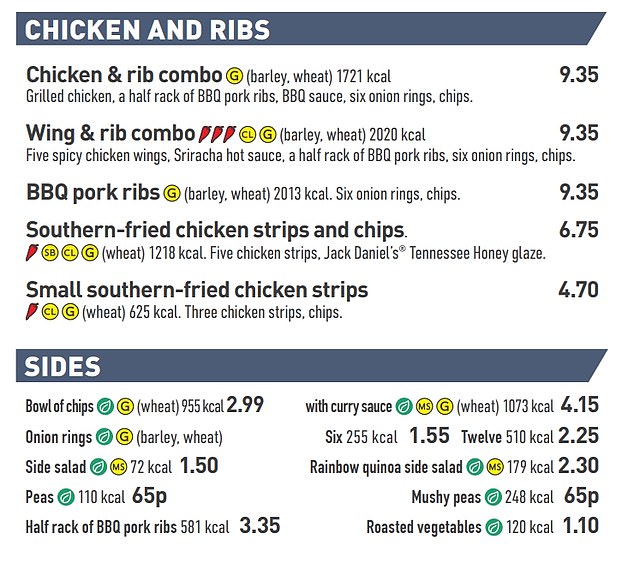 At Wetherspoon’s many items are more than 2,000 calories, including the BBQ ribs with onion rings which is 2020 calories.

He added: ‘Our national obsession with calories isn’t healthy. It’s a form of measuring energy, sure, but how much should you actually be consuming as an individual?

‘Are you just going off the old adage of 2k for women and 2.5k for men? Cos all women and all men are the same, of course…

‘The obsession with calories and calorie counting has proven to be dangerous, potentially leading to eating disorders like bulimia.

‘To combat obesity you have to use a series of tools, including a focus on healthy eating (a diverse diet, combined with calorie control) and exercise. Education is key, starting at a young age. As a country we don’t even know where our food comes from, let alone what’s “healthy”.

‘Kids will grow up in restaurants, hotels and cafes only looking at that little number below a dish. Choices will be made based on a number alone. The love of flavour, ingredients, history, cooking craft or nutrition will be lost and masked by a newly perceived focus. 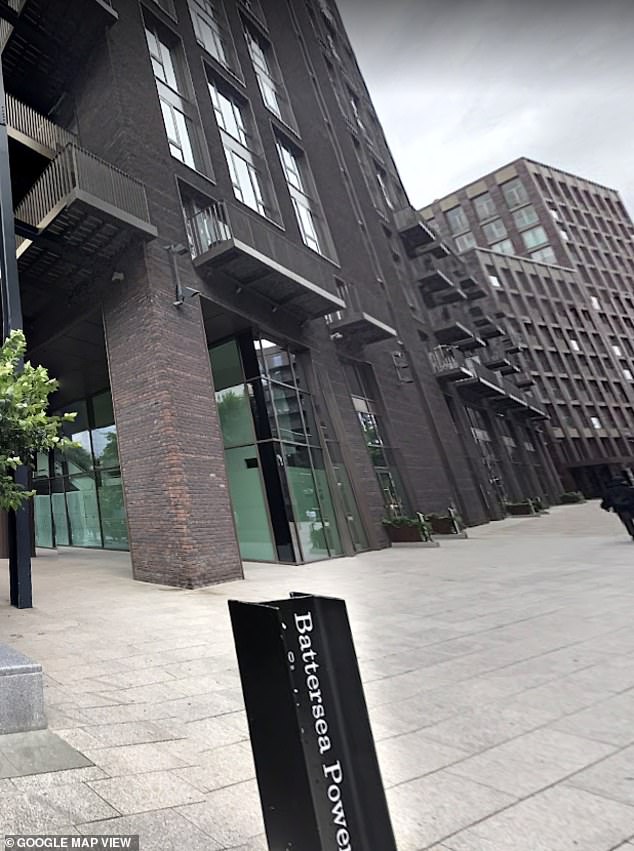 Sven, who runs the Oxeye restaurant in London (pictured) said he would ‘take the fine’ instead if forced to put calorie information on menus 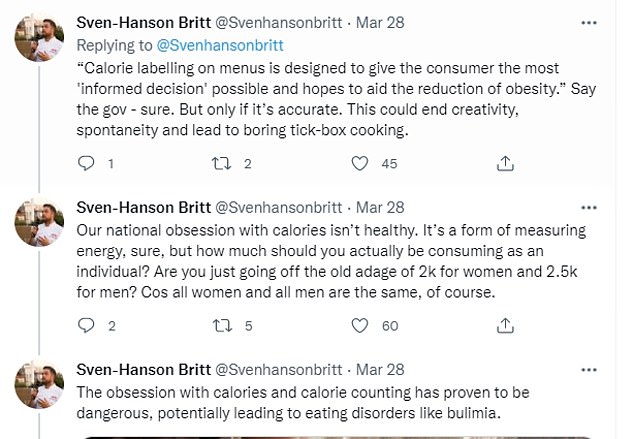 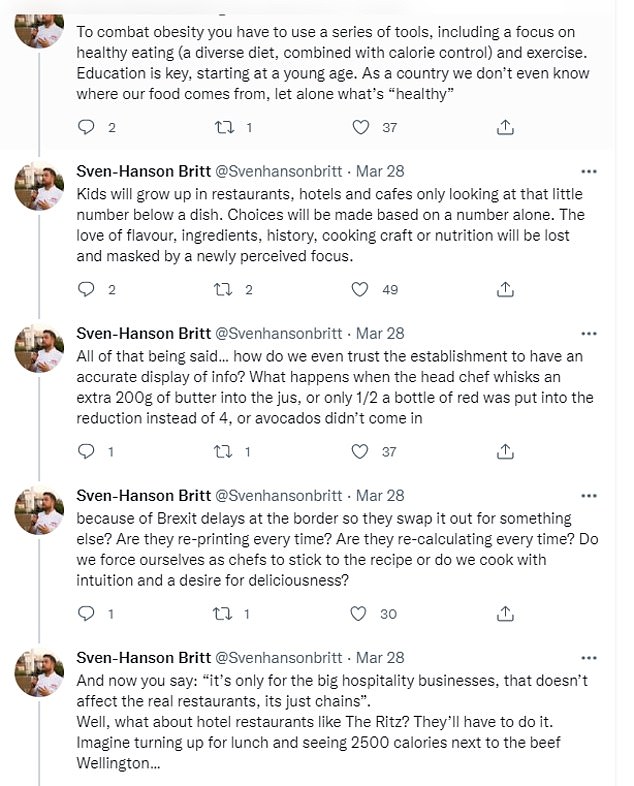 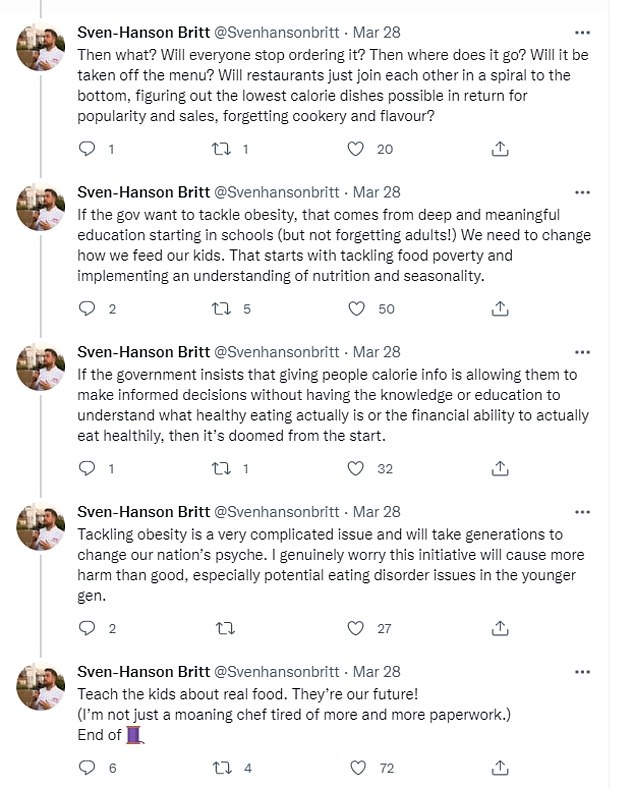 In a series of tweets , Sven wrote: ‘Calories on menus this week guys. The law kicks in for “large hospitality businesses” to display calorie info on menus. What a terrible, terrible thing to happen to the hospitality industry and a waste of time, money and a potential danger…

Why are the government introducing calories on menus?

The Department of Health is mandating that from April, all food outlets with more than 250 employees will have to put calorie informaion on menus in a bid to tackle obseiety.

But critics have argued, there’s little evidence this will help.

In the US, calories have been mandated on restaurant menus since 2018 but obesity has increased.

According to the New York Times, it’s made diners opt for higher calorie items rather than lowers ones.

Speaking to British Vogue, food industry development chef and the author of The Angry Chef: Bad Science and the Truth About Healthy Eating Anthony Warner said that counting calories isn’t an efficient way to tackle obesity.

‘The things that will improve obesity will be lifting people up socially and economically, [and] addressing systemic problems, rather than making people feel guilty about calories,’ he explained.

Stuart Flint, an associate professor of the psychology of obesity at Leeds University and a director of Obesity UK, also criticised the plans, telling the Guardian: ‘It might not be helpful.

‘We need to really understand how people are going to engage with this. Is it going to mean that people only look at calories? A chocolate bar is less than a balanced meal, but we don’t want people to be having a chocolate bar and skipping the meal. It’s not always about reducing the amount we eat.’

‘All of that being said… how do we even trust the establishment to have an accurate display of info? What happens when the head chef whisks an extra 200g of butter into the jus, or only 1/2 a bottle of red was put into the reduction instead of 4, or avocados didn’t come in because of Brexit delays at the border so they swap it out for something else?

He went on to explain that restaurants will have to ditch high calorie dishes and ‘it will take generations to change our nation’s psyche’ about nutrition.

‘And now you say: “it’s only for the big hospitality businesses, that doesn’t affect the real restaurants, its just chains”. Well, what about hotel restaurants like The Ritz? They’ll have to do it. Imagine turning up for lunch and seeing 2500 calories next to the beef Wellington…’ he added.

‘Then what? Will everyone stop ordering it? Then where does it go? Will it be taken off the menu? Will restaurants just join each other in a spiral to the bottom, figuring out the lowest calorie dishes possible in return for popularity and sales, forgetting cookery and flavour?

‘If the gov want to tackle obesity, that comes from deep and meaningful education starting in schools (but not forgetting adults!) We need to change how we feed our kids. That starts with tackling food poverty and implementing an understanding of nutrition and seasonality.

‘If the government insists that giving people calorie info is allowing them to make informed decisions without having the knowledge or education to understand what healthy eating actually is or the financial ability to actually eat healthily, then it’s doomed from the start.

‘Tackling obesity is a very complicated issue and will take generations to change our nation’s psyche. I genuinely worry this initiative will cause more harm than good, especially potential eating disorder issues in the younger gen.

‘Teach the kids about real food. They’re our future! (I’m not just a moaning chef tired of more and more paperwork.) End of.’

Paul Foster, who owns the Michelin-starred Salt in Stratford-Upon-Avon replied to Sven saying: ‘It’s a bloody awful idea, mainly because the worry is that it will trickle down to smaller restaurants.’

Simon Wood, who runs WOOD in Manchester added: ‘It’s a ridiculous notion. God only knows why it’s even happening. Stupidity.’

Customers said they’d be ‘extremely triggered’ by the new mesaures

Speaking on TalkRadio, Sven added: ‘I actually think it’s dangerous. The possibility of calories just constantly being in your face whether you’re at a restaurant, a cafe, a, hotel, whatever, kids, youngsters, us as adults are constantly now looking at a number and choosing a dish based on a number not based on taste and nutrition, flavour ingredients what we actually want, what we should probably should be eating is just a number.

‘And we then think that we’re keeping that number low than that is healthy. So that’s the thing that winds me up.

‘It’s the fact that that will be the main focus moving forward, we’ll lose the love of food we’ll lose an idea of nutrition and deliciousness and what we should be eating and it will just be a main focus on a number and I just think that’s very, very sad and dangerous to me is.’

And Just Like That he’s alive, Peloton claims in ad starring Mr Big

RAS inhibitors for use in fighting more cancers

Shirdi Sai Baba Temple to Reopen Tomorrow: Here’s How You Can Travel From Mumbai to Shirdi

All the hairstyles to copy from Sonakshi Sinha

What you should cook over Christmas, according to chefs