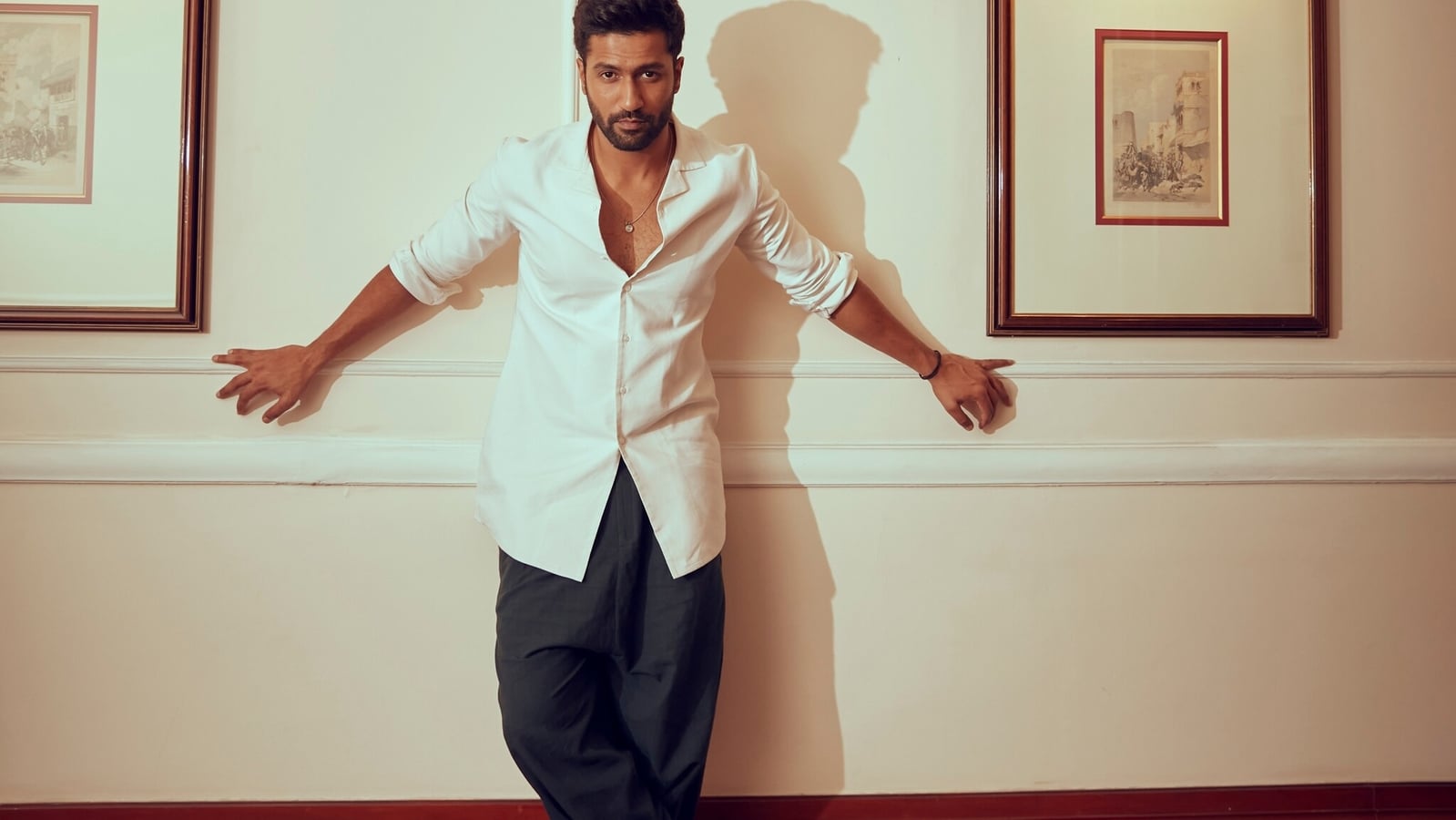 Raising the bar of men’s fashion goals, ever since he started promoting his upcoming movie ‘Sardar Udham’, Bollywood actor Vicky Kaushal left the fashion police stunned again as he made tradition meet luxury in a safari collar shacket and a pair of salwar-like pants. Continuing to make fans swoon over his style, this time in fusion fashion, Vicky stepped out to promote Sardar Udham in a white safari collar shacket and stylish navy blue salwar-like pants.

The pictures flooding from his latest photoshoot in a luxurious setting show him giving ethnic wear a contemporary spin and we are smitten. The pictures feature Vicky donning a relaxed, classic safari collar shacket that came with full sleeves and a buttoned down front.

Made of cotton silk, the shacket was worn with rolled up sleeves and Vicky teamed it with a pair of navy blue kirvo pants. Relaxed and made of handwoven cotton, the pants sported  a salwar-like look at the things and we are in love with this fusion look that breaks the monotony of menswear.

The actor was styled by celebrity fashion stylists and costume designers Amandeep Kaur and Ria Rawlani and completed his attire with a pair of classic peshawari sandals that were handmade in premium leather nappa. The tan leather footwear came with a buckle and small stacked heels.

Sweeping back his thick gelled hair upwards, Vicky accessorised his look with a wristband in one hand and sported his well groomed stubble. Striking typical serious poses for the camera, Vicky redefined fashion goals for men and we are in awe.

The ensemble is credited to Indian designer Ujjawal Dubey’s fashion label Antar-Agni that boasts of naturalist aesthetics. While the white safari collar shacket originally costs ₹13,900 on the designer website, the navy blue Kirvo pants are priced at ₹10,700.

On the other hand, the Peshawri are credited to Aprajita Toor’s footwear label that prides in perfect Indian sandals. Vicky’s tan leather Peshawri sandals originally cost ₹7,599 on their website.

Vicky Kaushal’s upcoming film, Sardar Udham is helmed by Shoojit Sircar and is based on the life of Sardar Udham Singh, a patriot who fought courageously against the British subjugation of India. The film focuses on his mission to avenge the lives of those killed in the Jallianwala Bagh Massacre of 1919.

Singh had assassinated Michael O’Dwyer, the former lieutenant governor of Punjab, on March 13, 1940, in London as a retaliation for the Jallianwala Bagh massacre of 1919. The film also stars Shaun Scott, Stephen Hogan, Banita Sandhu and Kirsty Averton in supporting roles.

Who is eligible for the booster vaccine and how do I book an appointment?

Marathwada Liberation Day 2021: All You Need to Know About the Historic Day

Recipe: Treat yourself to a healthy snack bite of vegan muesli snack stick

Covid: Should the work from home mandate return?

Afghanistan’s health-care system is ‘on the brink of collapse,’ WHO warns