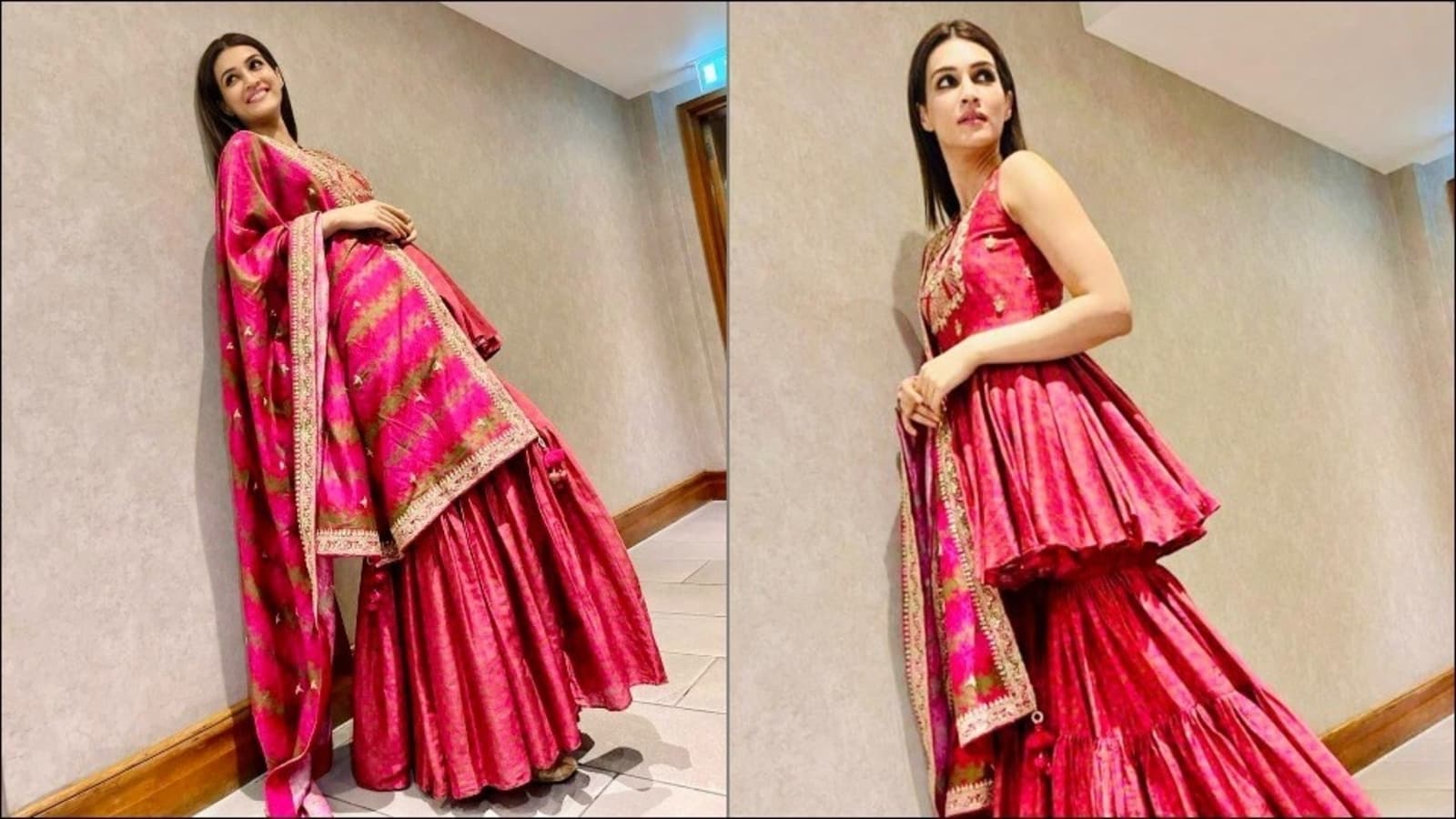 Making us move over regular ethnic wear, Bollywood actor Kriti Sanon encouraged us to elevate our Indian style wardrobe this wedding season with a sultry spin. Marking Diwali celebrations in London, Kriti stunned in a cherry red gharara choli and the fashion enthusiast in us has been hooked ever since.

The diva’s stylist shared a slew of pictures which gave fans a glimpse of Kriti’s sartorial festive celebrations on foreign turfs. The pictures featured the actor donning a cherry red sleeveless Anarkali kurti that came with embellished marodi work on the yolk.

The chanderi silk kurti was teamed with a pair of similar fabric gharara that too came in cherry red colour. Completing her attire with a pair of golden juttis, Kriti layered the look with a matching dupatta that sported marodi work all along the border.

Leaving her sleek silky tresses open down her back in mid-parted hairstyle, Kriti went sans accessories to let her ravishing ensemble do the maximum talking. Wearing a dab of luscious pink lipstick, she amplified the glam quotient with rosy blushed and highlighted cheeks, kohl-lined eyes with black eyeliner streaks, mascara-laden eyelashes and filled-in eyebrows.

The ensemble is credited to Indian fashion designer Punit Balana’s eponymous label that boasts of being rooted in Indian culture while combining modernism, minimalism and aestheticism and taking cultural influences from the rich Rajasthani culture. The cherry red gharara set originally costs ₹42,500 on the designer website.

Kriti Sanon was styled by celebrity stylist and creative consultant Sukriti Grover. Diwali festivities might have been low-key as another year of Covid-19 rages through but nothing could have dampened the devotees’ festive spirit as they geared up for one of the widely celebrated Hindu festivals with great pomp and show.

Looking handsdown fashion goals this week was Kriti Sanon whose gharara look sorts our wedding style woes with a touch of sultry and her recent sizzling pictures are enough to back our claim. What do you think?

‘House Of Gucci’ Is Fueling A Vintage Gucci Craze

Researcher investigates ways to enhance neurolysin activity in the brain

In A Biskit is expected to return to Australian supermarket shelves

More long COVID cases during the second wave. Here’s how Ayurveda can help beat long COVID | The Times of India

Coronavirus Vaccine: Reasons why COVID-19 vaccines may not grant lifetime immunity like other vaccines

Michelin announces it will launch the guide MONTHLY