As Beyonce turns 40, these are 13 of her most legendary fashion moments 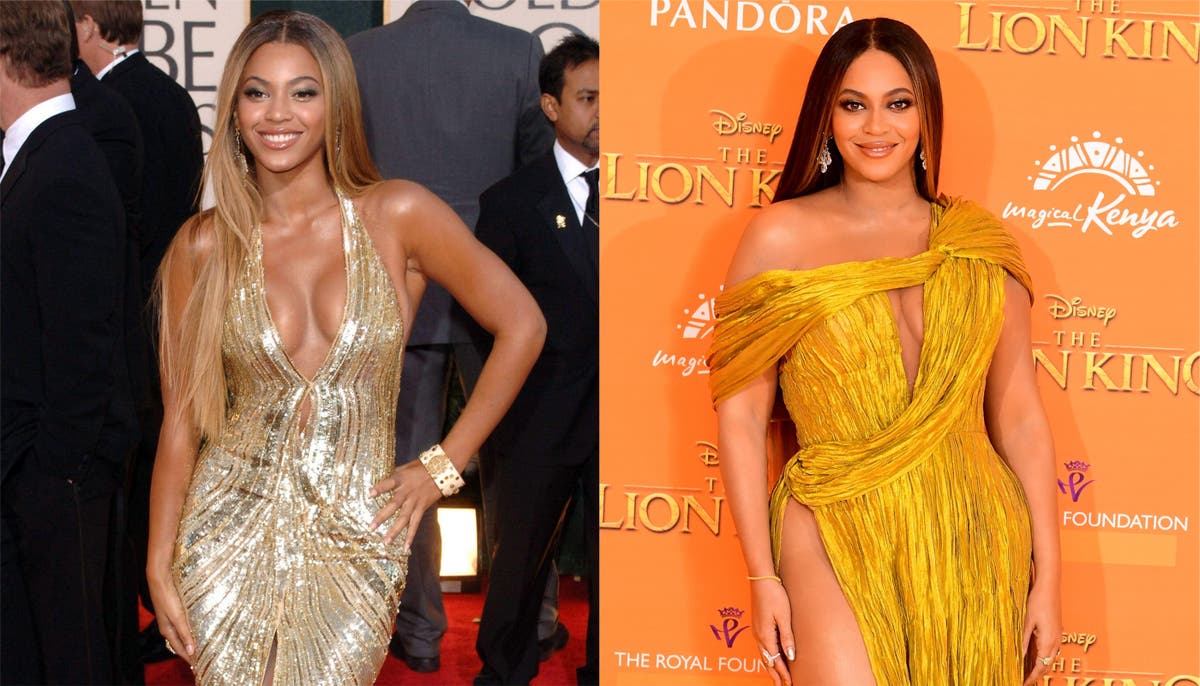 As impossible as it might seem, Beyonce is 40 years old.

Time doesn’t seem to have any meaning for Queen Bey: on the one hand, she’s been in the public eye for years (just cast your mind back to her Destiny’s Child days), but on the other – there’s no way she looks 40.

Agelessness aside, this milestone birthday is a chance to look back at some of Beyonce’s biggest looks. As well as being a singer, businesswoman and activist, Beyonce’s fashion always makes an impact…

1. In all-green with Destiny’s Child

Destiny’s Child was a master of girl band fashion: choosing one colour scheme and wearing different styles. For the 2001 Brit Awards, the colour of choice was sparkling green – an outfit the trio seemed to love so much, they wore it just a few days earlier to the Grammys

It’s something you wouldn’t see happen nowadays – but if you have a killer outfit, why not show it off twice in one week?

2. In Versace for Crazy In Love

Crazy In Love catapulted Beyonce to fame as a solo artist, and she did so in suitable style. One of the stand-out moments from the music video was the orange and pink Versace minidress with a plunging neckline and miniskirt.

3. In a ball gown for the Oscars

Beyonce went to her first Academy Awards in 2005 looking every inch a star. She kept things simple and elegant in a black strapless vintage Versace gown and statement earrings.

4. Dressed as an award for the Golden Globes

Who needs to win a trophy when you are the trophy? Bey was resplendent in a gold Elie Saab dress at the 2007 Golden Globes, with long, poker-straight hair she recreated for the 2020 ceremony.

5. Revealing her pregnancy in a suit

While this might not be the most famous of Beyonce’s pregnancy announcements (more on that later), it was the first and it certainly made a splash. When performing Love On Top at the 2011 VMAs, the superstar undid her sparkling Dolce & Gabbana blazer and rubbed her belly – signalling to the world a mini Bey and Jay-Z was on the way.

6. Championing the nearly naked trend at the Met

Nearly naked outfits might be everywhere on the red carpet, but Beyonce set the trend back in 2015 at the Met Gala. While the dress didn’t quite make sense for that year’s theme of ‘China: Through The Looking Glass’, the scandalous Givenchy outfit made up of a few well-placed jewels, a sheer skirt and a high ponytail will still go down as one of Bey’s most experimental looks.

7. Going skintight for the Met

Showing you can still have a risqué outfit without baring any flesh, for the 2016 Met Gala Beyonce wore a latex nude Givenchy dress with statement shoulders and intricate beading. We’re not entirely sure how it matched up to the night’s theme of ‘Manus X Machina: Fashion In An Age Of Technology’, but when you’re Beyonce, themes don’t matter.

8. Bringing drama to the VMAs

Beyonce doesn’t just walk the red carpet: she creates fashion moments. One of these was at the 2016 VMAs, where she wore a silver sequinned and see-through couture gown, by Italian designer Francesco Scognamiglio, topped off with some seriously major blue feathers around her neck.

9. In the Lemonade video

Beyonce’s 2016 visual album Lemonade was a cultural milestone. One of the most iconic outfits was a yellow dress by Roberto Cavalli in the Lemonade video – its whimsical romance playing perfectly against Beyonce holding a baseball bat and smashing car windows.

It’s the pregnancy announcement that broke the internet, and was the most-liked Instagram photo of 2017. Posing in front of a floral wreath, Beyonce wore mismatching underwear, a green veil and cradled her bump – it was nothing short of regal.

11. Looking angelic at the Grammys

Beyonce has given us some iconic pregnancy fashion moments, and few are as memorable as her performance at the 2017 Grammys. She leaned heavily into goddess vibes, wearing a gold dress by Peter Dundas. The gown was embroidered with all sorts of personal details from Beyonce’s life, and was topped off with an intricate gold halo.

Beyonce became the first black woman to headline Coachella in 2018, and her outfits lived up to the occasion. They were all designed by Olivier Rousteing of French fashion house Balmain, many of them paying tribute to historically black colleges and universities (HBCUs). One look was made up of a cropped hoodie – yellow on the first weekend, pink on the second – paired with denim shorts and fringed silver boots. It’s an outfit we’ll be seeing at Halloween for years to come.

15. Going for gold at The Lion King

For the London premiere of The Lion King in 2019, Beyonce – who voiced Nala in the film – wore a liquid gold custom-made gown by Cong Tri. The outfit had everything: asymmetrical shoulders, a mega thigh slit and a long train.

A complete BBQ menu to enjoy during the weekend heatwave

Researchers map neurons in the brain involved with social interactions with others in groups: Certain neurons are important for effective social behavior and healthy...

M&M’s chocolate spread with crispy pieces launches in Australia – so would you try it?

Tips to get over someone you never dated! | The Times of India

‘Lives must get back to normal’: UAE leader says Covid-19 is under control in the country

Coronavirus Vaccine: Will you be needing a COVID-19 vaccine next year? Here’s what doctors have to say

Diabetes medications linked to glaucoma prevention: Retrospective data from more than 5,000 patients shows that GLP-1R agonists may be protective against the disease

I Used Facebook Without the Algorithm, and You Can Too

Why the White House and Democrats use $400,000 as the threshold for taxing ‘the rich’

The Rise Of Climate-Conscious Consumers: The Climate Change Opportunity In Banking

A different approach to investing in developing countries