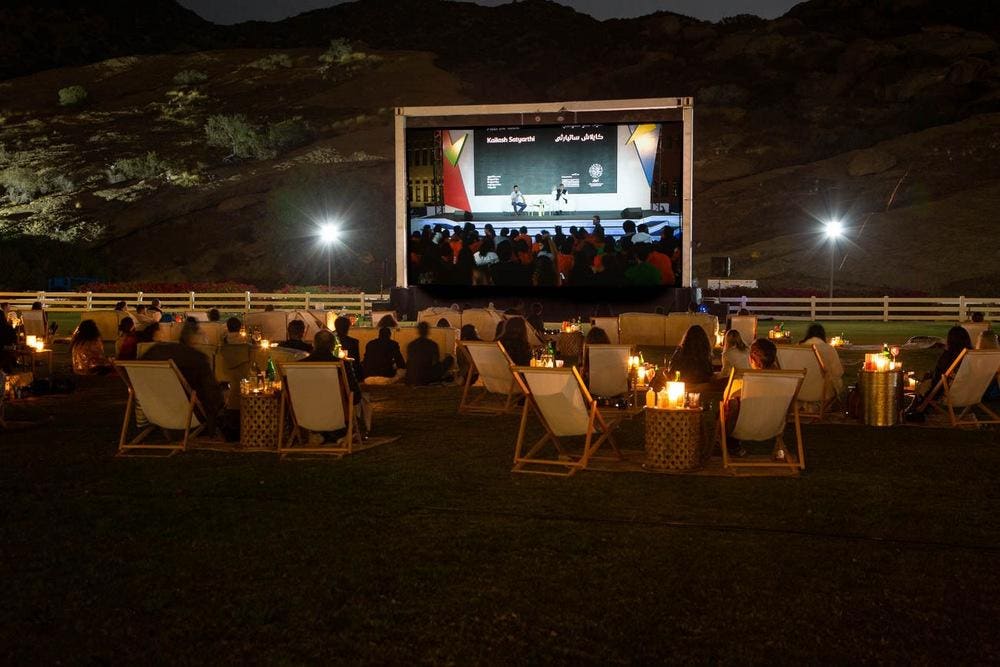 Picture this: A evening under the stars, sitting on couches and deck chairs in a large open field, with ottomans on which a Middle Eastern feast was set, to watch a series of short films on a giant outdoor screen. Dubbed a “Desert Drive-In” the evening was organized by the Qatar-USA 2021 Year of Culture, an annual international cultural exchange and the Doha Film Institute (DFI), an independent, not-for-profit cultural organization that supports the growth of the local Qatari and Arab film community. In this moment of pandemic-not-quite-over/future-still-uncertain, to watch movies with an audience, to share laughs and applause – was an extraordinary delight.

Why was I there? The answer is simple: Every so often, an invitation turns up in my inbox that bears reading twice to make sure it’s real before saying “Yes.” And, in truth, I wasn’t sure what to expect as I pulled up to the Hummingbird Nest Ranch, in the Simi Valley (about 35 minutes from LA).

I was led to an outdoor terrace overlooking the Valley, where refreshments were served amidst a demonstration of Qatari activities such as a performance by an oud musician, henna art (I now have a fading henna lotus design on the inside of my wrist), and a chance to speak and get a photo with) a majestic falcon (and its handler).

We were then led down to a beautiful field which had been outfitted with couches, ottomans and beach chairs, and a giant outdoor screen on which to watch the films. We were greeted by remarks from Karem Kamel, the DFI’s senior programmer and Mrs. Fatma Hassan al-Remihi, DFI’s CEO.

“It is a true honor for the Doha Film Institute to curate a wonderful selection of films that we have supported, including works by Qatari talent, for the Desert Drive-in to celebrate the ties between our two nations,” Mrs. Al Remaihi said, adding, “At DFI, we believe in the power of cinema to strengthen connections beyond borders, bring about positive change, and promote cross-cultural exchange.

The six short films shown were each interesting in their own way, all well-made. They were:

Al Johara (2016) by Nora Al Subaei, is a very cute retelling of Cinderalla set in modern day Qatar, with a beautiful young girl made a servant by her evil stepmother and stepsisters (who to this viewer had an uncanny resemblance to Kardashians). In some ways the restrictions of a devout muslim life played well with the Cinderella fable, culminating in a wedding party at which our heroine loses her shoe, and the prince who falls for her. The film was professionally made and acted, so much so that I could easily see Disney being interested in this version.

Maha’mel (2018) by Dhabya Al-Muhannadi: This silent documentary takes us into the precision engineering and expert craftsmanship involved in the construction of Qatar’s most iconic vessel, the Dhow boat.

The Unlucky Hamster by Abdulaziz Khashabi. This was a very cute animated film, told from the point of view of a hamster. The animation was reminiscent of Studio Ghibli style. Again, I can imagine the folks at Disney and Pixar, or Illumination Studios at Universal (Minions) would be very interested in these animators.

Black Veil (2019) by A.J. Al-Thani: ‘The Black Veil” tells a harrowing story of a woman who flees her home at night and travels to see her parents’ home in Mosul. When she arrives, she finds the house bombed out and deserted and the city under the clutches of Isis. Quite suspenseful, the filmmaker would be right at home in the world of one-hour dramas.

Gub Gub by Nouf Al Sulaiti, is a lyrical film about two young children who accompany their father to catch fish, and in the process seem to learn lessons about themselves.

Al Tabbab by Khalifa Al-Janahi is an animated fable about sailors who trade with a Sea Demon for pearls and a young child who sees the unfairness of the situation and had the bravery to challenge the monster. The animation is dreamy and beautiful.

The Present (2021) by Farah Nabulsi: An Oscar-nominated short film that debuted on Netflix, tells the story of a day in the life of a Palestinian man, accompanied by his young daughter, trying to buy a new fridge for his wife on his birthday, and the challenges and humiliations he faces crossing the Israeli checkpoints. Although the film is not political but rather very human, it does carry a message about the present condition of the Palestinian experience.

All in all, the program was varied, with both serious, dramatic, and comic films, narrative, documentary and animated – all by Arab Filmmakers, supported by the DFI.

During the pandemic, I, like so many others, have watched shows and movies from all over the world. Contrary to what is often said about American audiences, subtitles were no impediment – what mattered most was just good story telling. Sometimes the exotic location was an added plus. The DFI’s enchanted evening was a reminder of the great tradition of storytelling from the Arab world and the talent there that deserves to be better known by American content creators, distributors and audiences, and seen not just beneath the stars but on screens at home and in theaters.

Grieving father who lost son, 6, to cancer uses his ashes to create a leg tattoo of them together

Most stylish celeb weddings in 2021

‘Historic day’: WHO go-ahead for broad use of first-ever malaria vaccine for children in Africa

Dear Fiona: Should I sign my widowed mum up to a dating agency as a birthday surprise?

The boy born with a TAIL: Brazilian baby gets 12cm-long appendage chopped off

Jared Leto to Christian Bale: Actors who played superheroes and supervillains in DC and Marvel films