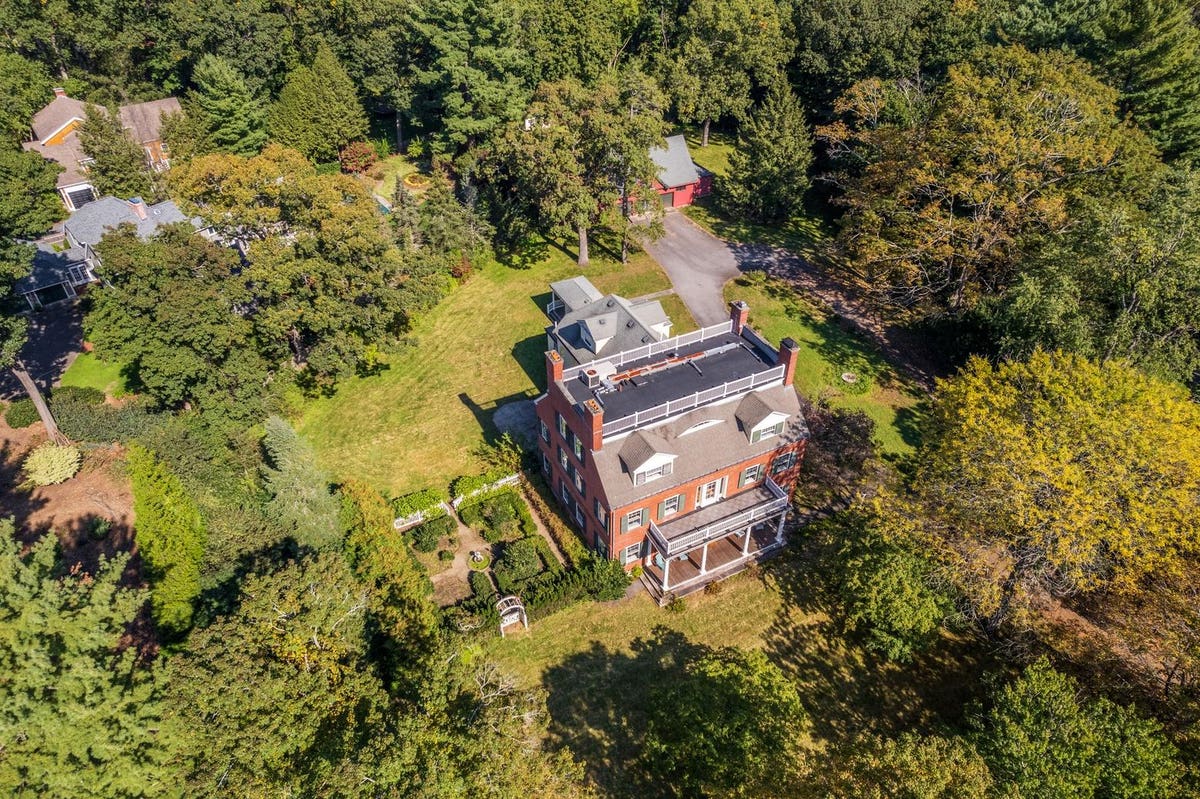 There’s no shortage of history in the Boston, Massachusetts, area. Concord, a suburb about 20 miles to the northwest of the capital city, is particularly noted for its literary culture, which took root in the 1800s.

The reputations of such local writers as Ralph Waldo Emerson, Henry Thoreau, Nathaniel Hawthorne and Louisa May Alcott were firmly established when this grand home was built in 1884.

A long driveway circles near the entry of the red brick Georgian Colonial, which is surrounded by expanses of lawn and mature trees. A formal garden sits to one side of the house.

Four white columns support the balcony overhanging the wide wooden front porch. Sidelights and an arched transom window lend a decorative appearance to the entry door. A door with similar sidelights accesses the balcony above.

White trim, green shutters and dormer windows complete the symmetrical façade. A captain’s or widow’s walk tops the roof. The once-popular design element provided a perch from which to look for ships at sea.

The more than 8,200 square feet of interiors feature tall ceilings and hardwood floors. The two-fireplace formal living room is crowned with ceiling medallions and moldings. Gas light and candles were still the norm when the house was constructed. Two chandeliers and wall scones provide light today.

Built before the time of refrigerators or dishwashers, the kitchen is modern yet in keeping with the traditional design of the home. The large center island contains a cooktop.

A central staircase with classic wooden balusters leads to the upper levels.

Among the upstairs bedrooms is the primary suite, which includes a foyer with a morning kitchen, the sleeping area and a sitting room with corner gas fireplace.

Below the three levels of living areas is a basement with high ceilings and brick walls. The space could be adapted to create a wine cellar, an art or craft studio, a gym or offices.

The more than two-acre property includes the main house, a separate guest house and a one-bedroom carriage house equipped with a kitchen and bathroom for a total of seven bedrooms and seven bathrooms. There’s also a five-car garage, two horse stables and a tack room.

Catherine Bassick of Bassick Real Estate Advisors is the listing agent for 23-29 Lewis Road, Concord, Massachusetts. The asking price is US $4.3 million.

8 of the hottest new designer fragrances for autumn

ISABEL OAKESHOTT: ‘My day with a frazzled GP is proof seeing your patients face to face saves lives’

How moles change into melanoma

Could coffee boost your cycling? Scientists explain how it super-charges performance

Mindful breathing for pain control: Like Yin and Yang

Winter is coming: How to store seasonal vegetables in the colder months

International Day for the Preservation of the Ozone Layer 2021: Theme, History and Significance