We grow many heleniums at Longmeadow, in the Jewel Garden, Grass Borders and Damp Garden. With their rich colours from bright yellow through to brown, carried in generous clumps and drifts, they provide outstanding value in terms of colour and form in the mid-season and late-season borders.

Heleniums naturally grow on the banks of rivers in their native North America and it’s worth remembering that when planting them – despite being remarkably adaptable, they are most at home in dampish soils with plenty of bright sunshine, and hate light soil in dry shade.

They are herbaceous perennials, regrowing with vigour every spring. Although the old growth remains upright and strong throughout winter it must be cut back in March as the new shoots appear.

All helenium flowers share the same characteristic of having a central raised boss, often brown and brocaded with yellow like a rich Elizabethan button, around which a ruff of petals is held, sloping down and away like an impossibly gorgeous shuttlecock.

The colours of the petals come in almost every variation and combination of yellow and orange, ranging from the pure yellow of ‘Goldene Jugend’ to the brick red of ‘Rubinzwerg’. The most famous helenium of them all, ‘Moerheim Beauty’, is a rich caramel colour with a brown boss.

Some heleniums (such as ‘Goldfuchs’) will, in fact, flower from early summer right through into autumn, while some do not begin their show until well into August.

How to protect tomatoes

They range in size, too, from very short cultivars like ‘Red Jewel’, which reaches only 60-90cm in height, up to an unlabelled whopper we have (which is yet to flower) that’s already 2m tall.

Their height – and flowering time – can be regulated by pinching them out hard, or applying the ‘Chelsea chop’ in June, which will make for sturdier, stockier plants that flower a little later.

The best time to plant them is in spring, just as they are coming into growth, and the same applies to dividing or moving them – this should always be done in spring not autumn, as the disturbed roots sometimes die back in an exceptionally cold, wet winter.

The clumps grow steadily but slowly, so they are never invasive, but every few years they should be lifted and divided by hand.

Pull the parent plant apart into as many clumps as it naturally falls into and discard the centre to the compost heap as, like all herbaceous perennials, it is the outside part of the plant that has most vigour.

Heleniums also take well from cuttings but if you’re thinking of doing this, June is the best time for it, before the plants come into flower.

They look tremendous with almost any range of flowers but especially with grasses or as a lower storey to the larger daisies such as rudbeckia or inula that flower at this time of year.

Heleniums are great for wildlife, too. Bees and butterflies love them all summer as they flower, and birds will pick over the seedheads in winter. 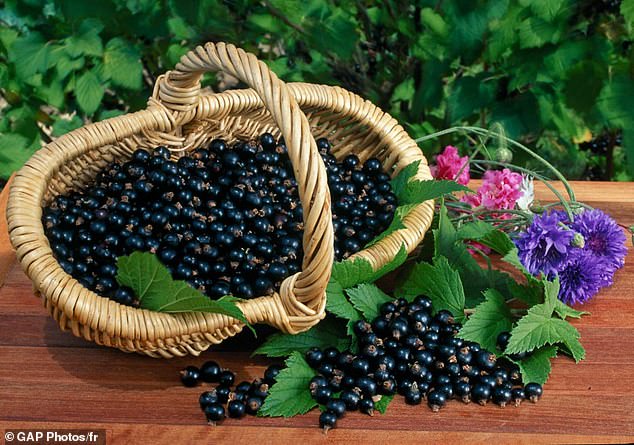 Blackcurrants (Ribes nigrum) do best in rich, moisture-retentive soil and need a mulch of manure or compost every spring. They also need lots of sunshine for the new wood and fruit to ripen, so do not grow them in shade.

However they crop best with exposure to cold weather, and warmer winters may severely limit their cropping.

Unlike red and white currants, which fruit on spurs that take a few years to develop and which can last for some time, blackcurrants produce their fruit directly from the stem, and new growth is the most productive. So the pruning regime is to cut the oldest stems right down to the ground, aiming to remove roughly a third of the total every year, just after harvest.

Blackcurrants take easily from hardwood cuttings stuck in the ground in autumn and left for a year before transplanting. ‘Ben Sarek’ is a compact variety, good for a pot, although you will get a bigger harvest from ‘Ben Lomond’, ‘Boskoop Giant’ or ‘Ben More’.

Birds love them and the plants must be netted from the time the berries start to ripen to the last picking – about mid-June till mid-August – or else the crop can be stripped overnight.

Bring the beauty and variety of flowers into the home

The definitive step-by-step guide to sell your property

With wildlife in mind, you need to take extra care when hedge-cutting

13 stylish storage solutions to get your home organised for autumn