As good as gold: September’s golden light is hard to beat, says Monty Don – but with the right plants you can achieve the same glorious effect all year

By Monty Don For Weekend Magazine

For most of my life, September, although beautiful, has filled me with dread. It was associated with going back to school, with the end of summer and the approach of a long, dark winter, and the gradual loss of all the things I love most about life.

But I have learned to love it. I love the slight chill in the air and the way the garden is spilling over with fruit and seed. Although the year is slipping away, at least it is showering us with gifts.

As autumn takes hold and the last rays of summer sun become increasingly fleeting, the garden spends a few days drenched in gold. These are some of the most beautiful moments of the year, and they depend upon the low angle of the sun combined with a clarity of light and a body of plants that you cannot get again.

But you can plant to bring as much gold into the garden, to provide the same warmth and splendour, throughout the gardening year.

Of course, substituting any old yellow when you really want gold is not going to do the trick. Yellow does not achieve the same effect at all.

Chrome yellow is the brightest colour in the spectrum and seems to throw out light of its own. Gold has undertones of brown and orange, and shimmers, reflecting light.

Generally, spring yellows tend to be paler than the ones at this time of year, so golden flowers are thin on the ground until midsummer. However as summer progresses the choice increases.

I have been growing aubergines for 20 years and yet most years I struggle to get a decent crop. One truly hot summer, I grew them with the tomatoes – they are cousins, both from the Solanaceae family – and we had scores of glossy purple fruits.

I watered every day, which any other year would create a humidity that tomato leaf mould would love, but in that fierce heat it was just enough to keep these thirsty plants happy.

I grow them in pots on the heated propagating bench. I sow in March, prick out the seedlings into 8cm (3in) pots, then in early June move them into the 30cm (12in) pots they remain in. I give them the same potting mix as cucumbers – lots of extra garden compost and plenty of grit – and a stake to stop them being bowed by the weight of the fruits.

Pinch out new side shoots after four or five fruits have formed or you’ll get a bushy plant and no extra fruit.

Slugs and snails love aubergines and will hide in the leaves. The fruits can be slow to develop but should not be left too long.

As soon as they are a reasonable size and shine like a guardsman’s boots, they are ready. Overripe fruits are dull and impossibly bitter.

Solidago, commonly called goldenrod, is a coarse plant but I like it, especially in a shady corner where it can shine out.

Golden foliage is more constant throughout the growing season and therefore vital. The golden hop, Humulus lupulus ‘Aureus’, is more lime-green than gold at first but sunshine and age help it to become as good as gold later in the year.

I grow it up bean sticks in the border and it can be cut back to the ground when the leaves begin to brown.

The margins of the leaves of the holly Ilex aquifolium ‘Golden Queen’ bring a spiky golden touch to the winter border. Despite the plant’s name, it is male and therefore produces no berries.

For golden fruits, look to the crab apple Malus x zumi ‘Golden Hornet’, the apples like beautiful little beads clinging to the branches.

Grasses, especially in this early autumn period, can make a garden glisten with gold and catch the light like no other group of plants.

The wonderful waving wands of the giant stipas are molten gold as the evening sun hits the seedheads. Calamagrostis x acutiflora turns from an orangey brown to gold with the light behind it, and Carex elata ‘Aurea’ needs sun only to enhance rather than create its golden tones.

Miscanthus nepalensis produces plumes like delicate strands of gold thread. These make wonderful cut flowers, opening out in the warmth of a room from zigzag streamers to fluffy feather dusters.

HOW TO FORAGE FRUIT 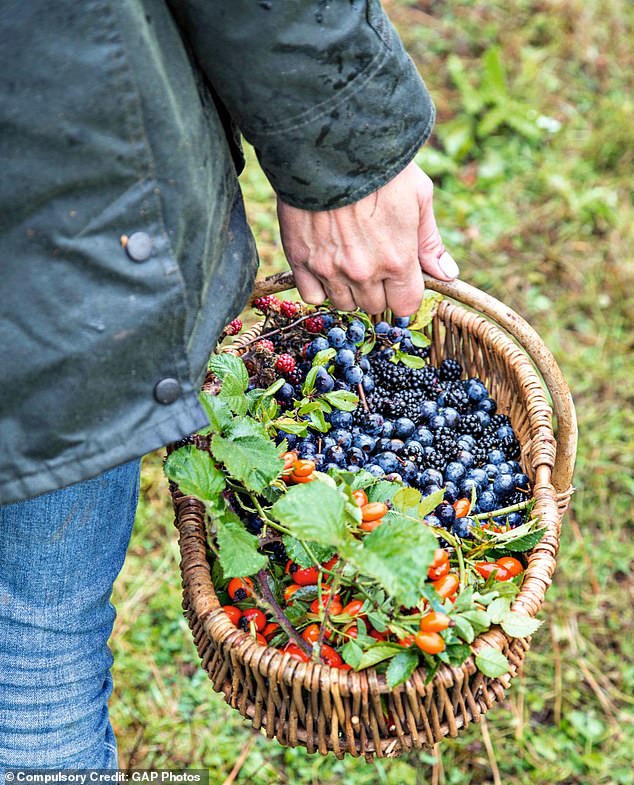 Staycation holiday: A day out with Peppa Pig at a New Forest theme park

If You Answer Yes to Any Of These 7 Questions, Your Workplace Is Probably More Toxic Than You Think