Michaelmas daisies – or asters as they are also known – are wonderful as the summer comes to an end. They aren’t showy plants but are often cheerfully beautiful, sometimes sublime and always great for attracting insects into the garden.

The easiest asters to grow are the novi-belgii cultivars. These aren’t Belgian at all – they come from New York and for years had a bad name because of their susceptibility to mildew, but they do have a wonderful range of colours, from the lilac ‘Ada Ballard’ and the double violet-blue ‘Marie Ballard’ to the deep plum colour of ‘Winston S Churchill’.

The New England asters, Aster novae-angliae, are less prone to mildew. But there isn’t such a wide choice of cultivars. ‘Barr’s Violet’ is a good purple, as is ‘Violetta’. ‘Lou Williams’ and ‘Septemberrubin’ are just on the pink side of plum.

Michaelmas daisies – or asters as they are also known – are wonderful as the summer comes to an end. Pictured: Aster novae-angliae ‘Purple Cloud’ with Comma butterfly 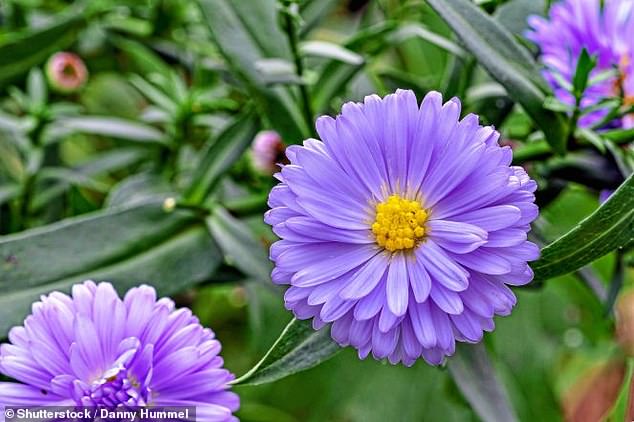 They aren’t showy plants but are often cheerfully beautiful, sometimes sublime and always great for attracting insects into the garden

All are happiest in moist soil, so dig in plenty of organic matter when planting and mulch extra thickly in spring. Like most asters, they flower best in full sun.

The powdery mildew that can afflict Michaelmas daisies is a fungus that starts on the underside of the leaves and then spreads rapidly, blown by the wind. Keeping all weeds down helps a lot as they act as hosts to the mildew.

The fungus lives through the winter attached to the dried-up leaves and will almost certainly infect the young shoots in spring.

MONTY’S PLANT OF THE WEEK

Guernsey lilies (N. bowdenii), which can grow to almost 60cm tall, have a starburst of pink flowers formed of flamboyant petals (above). They need well-drained soil and as much sunshine as possible.

The ideal location is at the base of a south-facing wall, or in pots filled with very gritty compost and placed in your sunniest spot. Plant the bulbs near the surface; they flower best if the bulbs become congested, so pack them in tightly.

They’ll need a weekly dose of liquid seaweed or tomato feed during their growing season. 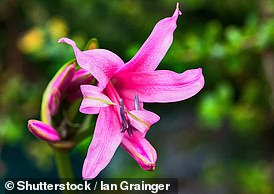 Removing, shredding and composting all top growth at the end of the flowering season will reduce the number of spores surviving the winter. Also, keep the plants properly watered and mulched, as the mildew spreads more quickly in drought.

Lift and divide the plants every three years, replanting the exterior sections in a fresh site (this can be just a metre or so away from the original spot). By discarding the interior you’ll provoke more mildew-resistant growth.

All asters can easily be propagated by division. A dry day in early spring is ideal. Lift a clump and split with a spade into segments about 15cm across. Plant these in small groups directly into soil that has been enriched with garden compost, with each piece about 60cm from its neighbours. Water well and mulch thickly. You can also take cuttings in spring from fresh growth, making the cut right at the base of the shoot.

It is an especially good idea to regularly divide New England asters, not least because large clumps invariably become very dense and woody, and intrusive in anything but the very largest border.

Dividing them often also reduces this group’s tendency to lose its lower leaves. However, it is a good idea to place all New England asters towards the middle or back of a border so their naked lower regions can be decently clothed by other plants in the foreground.

Aster umbellatus, the flat-topped aster, has tall stems with a mass of small white flowers that go very well with grasses. I also have some A. divaricatus, one of the few asters that enjoys shade.

Again, it has small white flowers (but carried on much shorter stems), and is a modest plant if grown alone but good if allowed to form a drift. It remains light and elegant despite effectively being ground cover.

A. x frikartii likes the same alkaline, well-drained conditions as A. amellus (it is a hybrid between A. amellus and A. thomsonii), so use mushroom compost to mulch them and avoid cow manure or composted bracken. It is otherwise problem-free. ‘Jungfrau’ is a compact, rich lilac that’s good for small borders.

We also grow ‘Mönch’, which is pale lavender with flowers that continue from July to October. 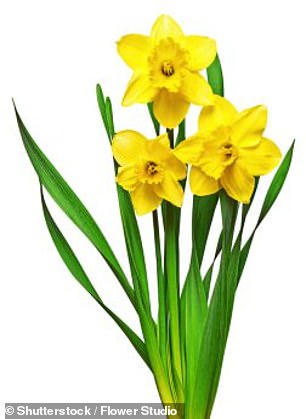 Plant spring-flowering bulbs like daffodils and crocuses into containers and borders in September, because any later than this, the bulbs lose precious growing time and their subsequent performance is impaired

How to grow spring bulbs

Plant spring-flowering bulbs like daffodils and crocuses into containers and borders in September, because any later than this, the bulbs lose precious growing time and their subsequent performance is impaired.

Tulips, however, should not be planted until November.

There are two rules when planting bulbs. The first is to allow at least twice their own depth of soil above them, and the second is to put them in pointy end up.

But as with all good rules, there are exceptions – the imperial fritillary, for example, needs to be 15-23cm deep and planted on its side.

Another general rule is that bulbs need good drainage, so mix in loads of grit – especially for tulips, alliums and Iris reticulata.

Snowdrops and the snake’s head fritillary, however, not only prefer damp conditions, but need them in order to thrive.

With wildlife in mind, you need to take extra care when hedge-cutting

Wise up to the joys of sage!

Puneeth Rajkumar to Chiru Sarja: Actors who passed away too young

Why Jasprit Bumrah Didn’t Play in The Series Opener And Will he be Part of Nagpur T20I?

KWK 7: Gauri Khan Reveals Aryan is Her Fashion Police, Does Not Let Her Wear These Clothes