We live on the edge of a flood plain, with a river and a brook running mere yards from us. This means that a substantial slice of the garden – and hundreds of acres all around it – regularly floods.

It looks very dramatic and the water laps under the kitchen window but it is actually rather beautiful, does little damage and there is no evidence that it has ever come into the house over the past 500 years, although climate change leaves little room for complacency and the weather is definitely becoming more extreme.

The part of the garden that invariably floods first very quickly became the Damp Garden. I planted hostas, rodgersias, ligularias, the shuttlecock fern – Matteuccia struthiopteris – dogwood, willows and four quinces, which, of all fruit trees, are best able to cope with wet conditions.

Pictured: Bright pink candelabra primulas in the bog garden at this beautiful garden, open to the public, near Fishguard, West Wales 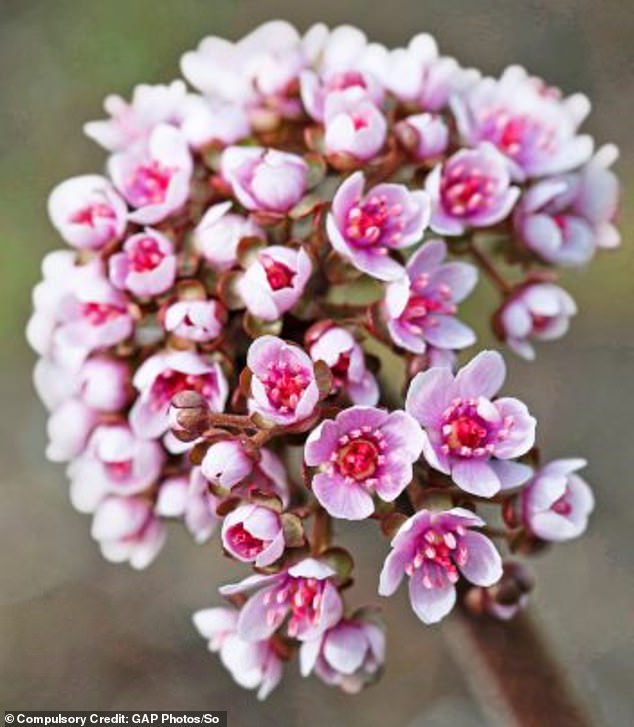 Pictured: Darmera peltata. Monty planted this as part of the bog garden which he incorporated into his outside space

Then, in 2012, we made a pond there, with paving on one side and the existing plants around it as well as, to some extent, in it along the margins and shallows. This would regularly disappear under the flooding, but in between floods at the back, where the quince trees were, and where we had mounded a lot of the soil when we dug the pond, it would become bone dry, the trees sucking up all excess moisture.

This is jarring to the gardener. The eye expects to see similar plants rising from the water through the marginal area and on to the banks and surrounding vegetation.

Q Please could you tell me the best way to get parsnip seeds to germinate?

A Parsnips (below) are notoriously slow to germinate, especially when it is cold. So as well as advocating patience – it is quite normal for them to take up to six weeks – I’d delay sowing until the ground feels warm. For me that is mid or even late April. Parsnips taste better after a frost and will last into next spring so there is no hurry.

Q We have chalky, dry soil and have not had much luck growing hydrangeas. Any suggestions?

A You’ve identified the problem! Hydrangeas like moist conditions and light shade, so you must plant them in some shade, add lots of compost, leaf mould or manure, and water regularly.

Q I live near an area where bracken grows. If I shredded last year’s plants, would that be suitable to spread as a garden mulch?

A Bracken makes an excellent compost, as mulch or as part of potting compost. As well as shredding, I’d compost it for three months because it breaks down to a lovely crumbly consistency. It’s ericaceous so is especially suitable for mulching plants such as rhododendrons, camellias, raspberries, blueberries and heathers.

But if you go from the soggy margins of a pond to the bone-dry soil around it then you have two completely different growing environments, and that visual and horticultural harmony you expect cannot be created. So this spring we decided to cut down two of the quinces, which were not thriving anyway, and create a bog garden at the back of the pond.

This involved digging out a large crescent, about four feet deep, following the curve of the circular pond. I then lined this with old compost sacks, loosely overlapping and further punctured with a knife.

This was then covered by a layer of shingle to stop the drainage holes from completely clogging up. The idea was to make the drainage much worse but not to block it altogether.

The offcuts from a butyl pond liner would be ideal or, if you have access to it, puddle clay – but the latter might have to be transported miles, which is not very environmentally friendly.

The soil is then replaced, plants planted and the whole thing thoroughly soaked. It’s essential that it never dries out – this is what defines a bog as opposed to a damp area. Ideally you would install a perforated pipe under the bog that can be connected to a hose as needed but because of our regular flooding, I figured that I could skimp on this.

The planting has been based around the same hostas, ligularias, ferns (including the marvellous royal fern, Osmunda regalis), primulas and rodgersias. To these I have added Darmera peltata, Iris sibirica and Iris ensata, various persicarias, thalictrum and some candelabra primulas.

I wanted to add a gunnera but they have become something of a threat to our waterways, and given that we live so near to a river, I thought it irresponsible. However, as a lovely alternative I planted a magnificently robust Rheum palmatum ‘Atrosanguineum’.

Now, four months later, it all looks strong and healthy, and is harmoniously blending in to the planting within the pond itself. The secret to adapting to extreme conditions is to double-down.

In other words, go with it and choose plants that love extreme wet or extreme dry rather than trying to steer a middle ground. However, true to form, the weather has been exceptionally dry and there has not been a hint of flooding! 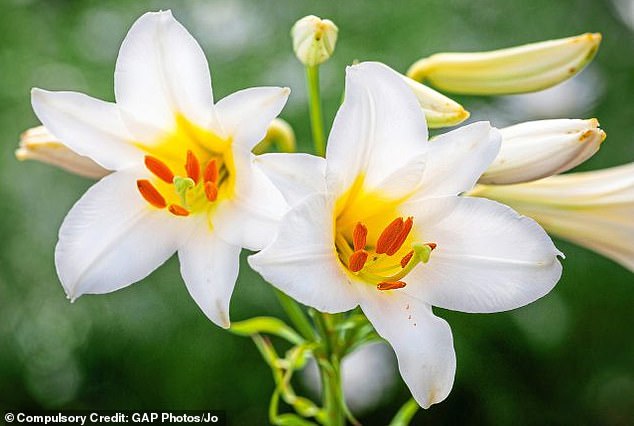 Monty said lilium regale have an opulent scent and will last for years- growing in most soils, but it doesn’t really like chalk

For all its sumptuous beauty and opulent scent, the regal lily is very hardy – meaning it can last for years – and will grow in most soils, though it doesn’t really like chalk. Give it good drainage as it can cope much better with drought than being too wet. I grow mine in containers, adding plenty of leaf mould to a coir-based compost.

While the main regal lily is flushed with purple on the outside, ‘Album’ (above) is almost pure white. After flowering, remove the seed heads and allow the foliage to die down naturally.

Sole survivor of Hollywood’s golden age? The hotel that has seen it all

Lampshades to add joy all year round

Go wild for the Jubilee! A wildflower patch like the display for the Queen at the Tower of London

The Notre-Dame fire has inspired a new disaster movie, and it speaks to France’s soul

A VERY PRICKLY ISSUE: Not everyone agrees but thistles add elegance and attract pollinators