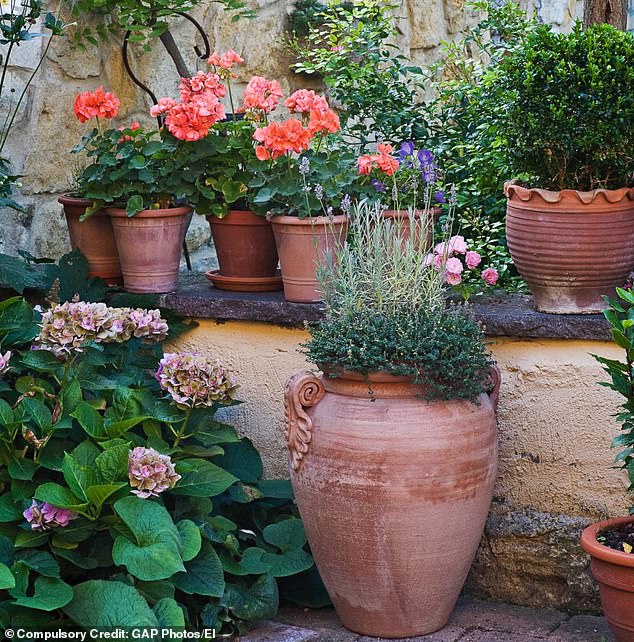 I am a sucker for large, individual pots. The first really good one I bought was decades ago when Sarah and I spent Christmas in the south of France. We asked a couple where to buy some and were told to ‘bat on down to Biot’.

We duly batted down the road and, sure enough, we discovered acres of lovely jars. We chose our favourite, fitted it in the car, secured it with a seat belt, and drove it home to our Hackney garden. It was a beautiful, curvaceous oil jar that we put in the centre of the garden but never planted.

UK-based gardening expert Monty Don shares advice for making the most of pots in your garden. Pictured: Whether in clusters or on their own, containers can create a dramatic effect

We took its pieces to a local potter to see if it could be mended or if a copy could be made. But as the original was over 500 years old and so delicate – the clay was thinner than an eggshell – it defied every rule of pottery. Even now, it remains in pieces but we have a much thicker, cruder copy in the Jewel Garden.

This is a long story to show how one can become attached to pots as objects, but I have not worked out a way of using them for plants. Nothing looks right or better than the unplanted, unadorned pot.

Big, dramatic containers planted to look like a huge, vibrant bunch of flowers is a good thing, but it’s difficult to do without being messy.

I am now inspired to use identical pots, identically planted rather than one big display. Around this time, you can use box or holly, or grasses such as Festuca glauca, Briza media or the brown Carex comans to create simple topiary shapes.

HOW TO GROW MISCANTHUS SINENSIS 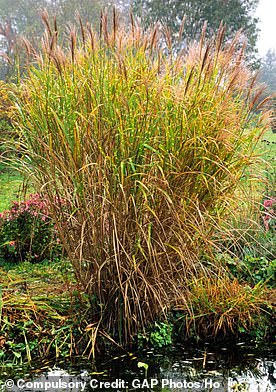 Miscanthus sinensis ‘Zebrinus’ is a lot of name for a lot of plant, both in volume and impact.

If you can splash out, a pair of citrus plants in pots makes a superb display flanking a doorway. The plants will need protection from all but the lightest frost but this can be done on an ad hoc basis by draping fleece over the plants and removing it when the temperature rises.

I’m going to plant evergreen ferns in pots for the shady courtyard and I’m not after anything exotic. Hart’s tongue (Asplenium scolopendrium), the soft shield fern (Polystichum setiferum) and the Japanese shield fern (Dryopteris erythrosora) are lovely, thrive in the shade and add depth to what is a very bleak area in winter.

Early November is not too late to plant up pots with bulbs. Conventional advice is to plant in layers, starting with the largest at the bottom and working towards the top through hyacinths or muscari. This works if you have a few larger pots but I’d suggest planting a single type of bulb in multiple small pots.

The important thing is all bulbs other than fritillaries and snowdrops like good drainage, so mix potting compost with an equal volume of grit. Snowdrops are best grown from plants rather than bulbs, so buy when they flower in February.

Parsnips have grown in this country since the Romans introduced them and were widely eaten before the potato became the staple starchy vegetable.

They taste much better after a frost has intensified the sugars in them and will withstand any amount of foul weather, remaining unharmed in the ground until spring or until you want to eat them. If left until spring they will start to use the energy in their roots to produce a flowering stem.

They are perfect baked or roasted with a joint of meat and I love parsnip purée. You simply boil the roots and then liquidise them with some of the cooking water and lots of butter or cream.

They are not at all difficult to grow but the large flat seeds are slow to germinate and need a long growing season to mature. Sow seeds in March or April on a piece of ground that will not be needed for a year.

The soil, obviously, must be dug to a good depth if the roots are to develop to any size but do not add any garden compost or manure as this may cause the parsnips to fork or split and will also encourage a lot of lush foliage above ground at the expense of the roots.

Wild about orchids: Exotic-looking and hardy, these plants are perfect for brightening borders

This Protein Predicts a Brain’s Future After Traumatic Injury