Tory big beast Michael Heseltine was always a man of action in politics. And the same, it seems, has been true at home.

Within a couple of days of moving into their elegant 18th-century country pile, Thenford House, in the famously hot summer of 1976, he’d set about the garden. ‘Michael was attacking the ivy growing up a tree while I was sunbathing in my bikini,’ his wife Anne recalls with a smile.

‘As he was doing so, the local rector arrived and wryly observed, “I think there are going to be some changes around here.”’

He wasn’t wrong. That day marked the start of a 40-year odyssey which has seen Lord Heseltine, whose mane of blond hair and swashbuckling style earnt him the nickname ‘Tarzan’ in the 1970s, transform the 70 acres of land surrounding the Northamptonshire mansion from an overgrown jungle of weeds and silted-up ponds – ‘the grounds had been neglected for most of the 20th century’ says the former deputy prime minister – into a series of distinctive landscaped gardens, each with its own particular character.

Lord and Lady Michael and Anne Heseltine in their gardens at home in Thenford. The gardens now boast more than 3,000 different types of tree and shrubs 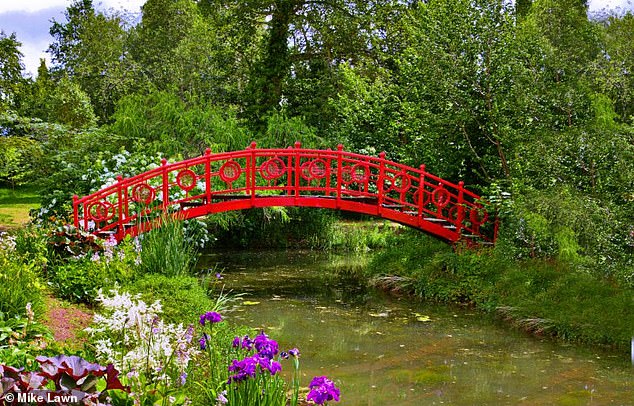 Michael Heseltine and his wife Anne have turned their garden into an arboretum. The former British politician, 89, has spent 40 years working on Thenford House (pictured)

Thenford Arboretum and Gardens now boasts a collection of more than 3,000 different types of tree and shrub, as well as extensive herbaceous borders, water gardens, an alpine trough garden, a sculpture garden, a rose garden and a rill. And hundreds of visitors a year now flock to see them on the annual open days.

‘It’s been a labour of love,’ admits Lord Heseltine, 89, who enjoyed a long career in front line politics. ‘But the gardens have brought Anne and I enormous solace over the years, particularly during the lockdowns.

‘I very much hope that one of the lessons we as a nation will learn from the last couple of years is the therapeutic effects of gardens and greenery.’

Thenford House is an Italianate mansion, but it’s the grounds that have been the main focus of Michael’s energy away from politics over the last four decades. ‘I reign in the house,’ laughs Anne.

‘But Michael is king in the garden because his knowledge of plants has always been so much better than mine.’ Although Michael diplomatically adds, ‘It’s extraordinary how often our tastes coincided when it came to creating the gardens.’

Anne and Michael take me on a tour in one of their ‘his and hers’ golf buggies, which they use to visit the four corners of the gardens most evenings. ‘These are our workhorses,’ says Michael.

‘They’re a vital part of life here. At our age, 70 acres would be quite a challenge to walk around!’

The idea behind Thenford was ‘to create a set of gardens that are like different rooms’, says Michael. The beauty of having spring and rose gardens, as well as woodland walks and water gardens, is that ‘every day is different, each bit of the garden has its moment’, observes Anne.

Politics or the arboretum and garden? There’s no question, I’ll be remembered for my trees!

‘So there’s that wonderful moment when there are primroses, snowdrops and forgetmenots altogether in the spring garden, and it’s suddenly a sea of bloom.’ Our first stop is the Sculpture Garden with its interconnected series of ‘rooms’ enclosed by yew and beech hedges.

This is very much Anne’s domain, and she chose the artworks. Among the mainly modern British sculptures on show are Elisabeth Frink’s naked Standing Man (‘he’s the husband of an acquaintance of mine’, she comments) and Philip Jackson’s Reading Chaucer (a young woman in a medieval gown and pointed hat seated on a bench with a book).

Although the monumental Lenin head that once stood atop the KGB building in Latvia steals the show for me.

As we zip down scattered paths and avenues among the trees and shrubs in the adjoining gardens, Michael points out features of interest. Highlights include the Walled Garden with its two champion trees (the tallest and fattest of their kind) nearby, Quercus semecarpifolia and Abies vejarii, two bridges (one Japanese-style, the other inspired by Monet), reflecting pools and domed pavilions, and beyond that the Herbaceous Borders, which are a blaze of colour.

‘We’re constantly improving and planting – herbaceous borders are the subject of endless fiddling about,’ says Michael. 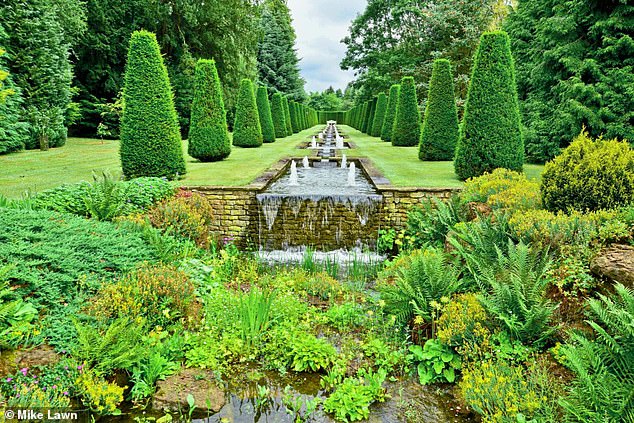 Thenford also boasts a stunning rill (pictured). A rill is a formal channel used to bring a bit of water into our gardens

One of the gardens he’s proudest of is the Trough Garden, created out of a series of sheep and cattle drinking vessels, with its wisteria, rhododendrons and rare species including Aesculus hippocastanum ‘Monstrosa’, a dwarf horse chestnut, Quercus durata (leather oak) and Cypripedium reginae (showy lady’s slipper orchid). Although my favourite garden is the cascading rill, a stunning water feature comprising nine interconnected pools.

Now the Heseltines want more people to enjoy the peace, tranquillity and beauty of Thenford so they’ve extended the number of opening days this year. As Michael drives me to Banbury train station in his Jaguar, I ask him if he thinks he’s more likely to be remembered for his achievements in politics or his arboretum and garden.

‘There’s no question,’ he chuckles. ‘I’ll be remembered for my trees!’

Constrict their roots, don’t feed them, water them minimally and pelargoniums will flower all summer

Chris ‘CT’ Tamburello Addresses Whether He’ll Retire From ‘The Challenge’

Why Central Bank Digital Currencies (CBDC) Now And What They Could Mean For Climate Change? (1/2)