Not every plant can be a star. You need fillers, supporters, attendants. Hardy geraniums, also known as cranesbills, fill that role in the garden better than almost any other plant.

That is not to say that they’re not beautiful and worthy of a place in any and every garden, but they always work best in conjunction with other plants. In football terms, they are the midfield players that hold things together as they deftly feed the goalscorers.

Hardy geraniums are, in fact, totally different plants from those we commonly refer to as geraniums, which, confusingly, are actually pelargoniums but were wrongly named because the two have remarkably similar seed capsules.

Monty Don shared advice for growing Hardy geraniums, as he labels them the best plant for fillers in any garden. Pictured: Monty beside G. ‘Rozanne

At almost any moment between April and October there’ll be a hardy geranium in my garden that’s looking lovely – especially now. Much of the pleasure comes from the ease with which they adapt to almost any situation.

There are varieties from Alpine scree, woodland, meadow and bog, so you’ll find some that will thrive wherever you put them. I let them spread almost indiscriminately in my own garden, not least because it’s easy to hack them back by cropping them flush to the ground.

At the moment the peerless ‘Ann Folkard’ is running riot through the Jewel Garden. Its habit of sprawling, crawling and entwining through neighbouring plants almost like a climber means its intense magenta flowers – so blue a pink that they’re almost purple – are spangled through the border like gaudy stars.

Q My Clematis armandii is full of sparrows but I need to cut it back. When is best to do this?

A The time to prune it is immediately after flowering, which is, of course, when birds are nesting. But clipping with shears is effective. If you do not wish to disturb the sparrows, do it in early August to give new growth a chance to establish before winter. If that’s impractical then do it in March, before the sparrows nest.

Q Last year you complained of rabbit damage but your plants appear relatively unscathed this year. What have you found to be helpful, please?

A I’m afraid the apparent lack of damage is a trick of television. Rabbits often decimate my ammi, crocus and wild tulips. As soon as the grass is growing strongly in neighbouring fields, they tend to leave.

Q I have blackfly on my dwarf beans. What’s the cause and cure?

A There is no ‘cure’ for wildlife in your garden. ‘Blackfly’ are black aphids drawn to soft new growth, and most broad beans in the country will have them from late June. Pinch out the new growth and they’ll look elsewhere. Or accept that they are part of the food chain and do little real damage.

Its leaves are yellowish, adding lightness to the bottom of a border.

Geranium psilostemon (which is a parent of ‘Ann Folkard’) is another that has magenta flowers. It is also vigorous but sprawls less, making a clump 1.5m tall and with a spread of 2m.

I have added ‘Anne Thomson’ to the garden this year, which has many of the characteristics of ‘Ann Folkard’ – the same magenta flowers with a black eye, the same lime-yellow leaves (although turning green as they age) – but it is neater and less sprawling.

Earlier in the season, G. phaeum dominated the Jewel Garden. Its clumps of chocolate-tinged foliage supporting a mass of tiny dark maroon, almost black, flowers provide the perfect backdrop to the tulips and allium ‘Purple Sensation’.

But it exhausts itself by June and needs cutting back hard. This can seem a bit radical and does expose gaps, but will rejuvenate the geranium and provide lots of space for tender plants ranging from annuals like sunflowers and cosmos to perennials like dahlias and salvias.

All hardy geraniums, without exception, should be cut back to the ground when they start to tire.

Otherwise they put all their energy into setting seed (the round seedpods with their long ‘beak’ give it its name cranesbill) rather than flowering. Cut back and new foliage will regrow with a second flush of flowers.

‘Rozanne’ has become a star in the past few years, covered with blue flowers for months on end. G. x oxonianum ‘Claridge Druce’ has candy-pink flowers and G. macrorrhizum has shades of darker pink.

‘Ingwersen’s Variety’ has white flowers touched with pink and is really tough. If you want pure white flowers, G. m. ‘Spessart’ is excellent – I grow it in the all-white Writing Garden.

G. endressii is good for smaller spaces and is one of the first to flower in spring, while G. x oxonianum ‘Wargrave Pink’ is a delicate pink but a very robust plant that can tolerate bone-dry shade.

MONTY’S PLANT OF THE WEEK 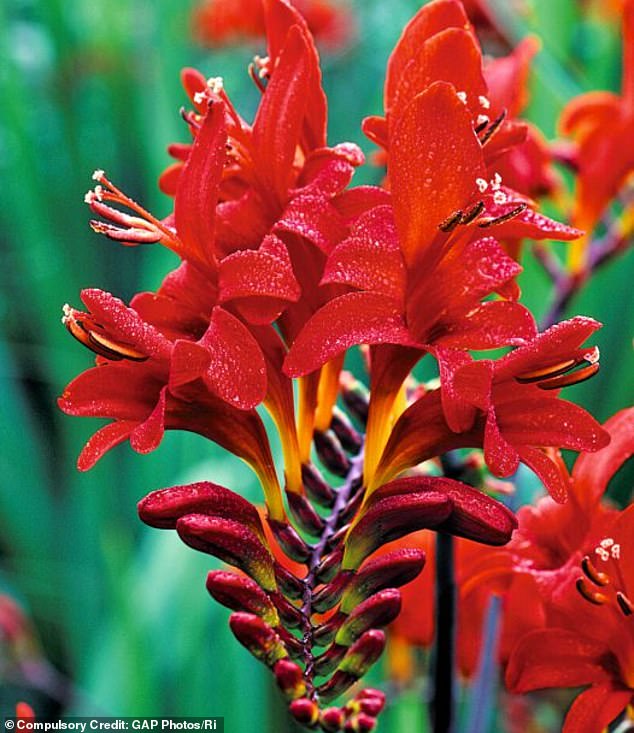 Monty said crocosmias (pictured) thrive in damp, rich soil, and the corms should be planted at least 15cm deep

This is a dramatic midsummer star. The flowering stems rise above the leaves to a good metre high, making splays of pleated buds before they open into an upright row of blooms standing on each spray with orange bases and petals of their familiar devilish red.

After it has flowered the seed heads are worth their place, starting out as a row of green peas flanking the flowering spine and turning ochre into autumn. All crocosmias do best in damp, rich soil, and the corms should be planted at least 15cm deep to ensure longevity.

It’s very important to keep dead-heading rambling roses as the petals fade to encourage repeat flowering. Ramblers grown into a tree can be left unpruned but remove damaged or very old shoots, cutting them right back to the ground. If training, trim or tie in new shoots.

Wise up to the joys of sage!

With a little patience you can create topiary to rival that of any stately home, says Monty Don

Is The Pandemic-Era Surge In Growth Equity Investing Sustainable?

Johnny Depp representative comments on Pirates of the Caribbean rumours