Go wild for the Jubilee! A wildflower patch like the display for the Queen at the Tower of London

Rewilding has become a trendy concept of late, but gardens are, and always will be, entirely unnatural and un-wild. They are the place where man and nature meet to create a space where both can live in harmony with each other.

Now, I am all for encouraging as much wildlife in a garden as possible – and that means having a pond, long grass, stands of weeds such as nettles, plenty of cover and lots of flowers for pollinating insects. To really appreciate our gardens we have to open the door to the natural world and embrace it, and one of the best ways to do this is to make a wildflower meadow.

Indeed, the Platinum Jubilee celebrations are embracing this idea, with the Tower of London’s moat opening to the public from 1 June after being sown with 20 million seeds to become alive with wildflowers (for tickets see hrp.org.uk).

A Beefeater at the Tower of London, where the flower-filled moat is set to dazzle visitors 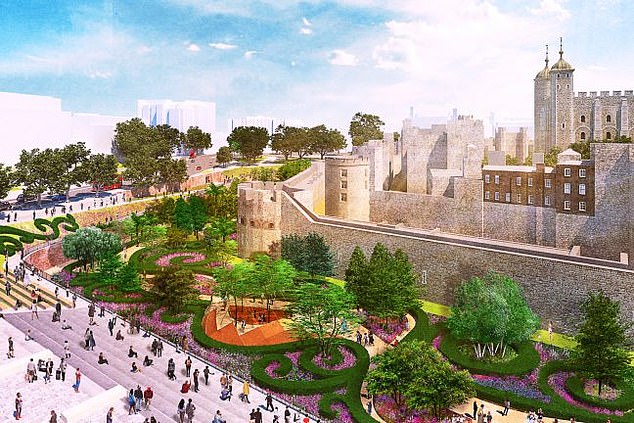 I have attempted something similar, albe it on a far smaller scale, in my orchard. For a quarter of a century we let the grass grow long until July, when we mowed it short and kept it that way for the rest of the summer.

But the grass got richer and richer and the weeds – mainly docks and hog weed – increased. So three years ago we began the process (and it takes a few years) of converting it to a flowering meadow.

Q We have patches of crab grass in our lawn. What’s the best way to get rid of it?

A Crab grass is an annual, so the most important thing is to make sure it doesn’t set seed. But it’s very low-growing and often the seedheads remain beneath the mower’s blades. So take out as much as possible with a hand fork, including roots, then sprinkle grass seed on the resulting bare patches.

Q Please can you tell me how to stop caterpillars eating my Solomon’s seal plant.

A The best defence against the larvae of the Solomon’s seal sawfly (below), which hatch around now, is from predators like ground beetles or birds that eat the pupae in the soil in winter. Gently fork around the plants in late autumn to expose them.

Q I have a dense, 50-year-old Japanese maple (right) whose branches are almost touching the ground. When is the best time to trim it, and how much?

A The ideal time to prune is winter when it is dormant. Never remove more than a quarter of the growth in any one year, so you may have to stagger the process across two or even three years. Don’t try to lower the height of the tree, and don’t remove any branches that are over half the thickness of the main stem.

I hesitate to call it a wildflower meadow because we have added lots of very un-wild bulbs such as tulips, daffodils, camassias, alliums and crocuses, but this is my point about so-called ‘rewilding’.

In a garden you take the best of the natural world and tweak and manage it. But the principles remain the same, whatever flowers you grow in grass.

The first is to impoverish the grass, and the best way to do this is by sowing yellow rattle, Rhinanthus minor, the ‘meadow maker’. It is an annual with a pretty flower composed of pale yellow bells of petals hanging off a central stem.

These then become translucent seedheads, and as the seeds within mature they dry and rattle in the wind – hence the name. But the most important thing about yellow rattle is that it is semi-parasitic on grass, greatly restricting its growth.

The second essential thing is to treat the area in question like a hay meadow. That means not cutting the grass at all between April and July to allow time for the flower seeds to ripen.

Then, when you do cut it, the grass must be trimmed as short as possible and all the trimmings gathered up, not left on the ground to feed the lawn as they rot. Thereafter it can be kept mown short right up until February, if the weather allows.

I sowed a wildflower mix in my orchard in August. When you sow wildflower seed – late summer is best, but it can be done in spring – it is vital to have as much bare soil as possible, as the seed will not germinate unless it is in direct contact with the soil.

So, after cutting the grass very short, scarify and rake out all thatch and moss before sowing.

Last autumn we put in all the tulips we’d grown in pots, and this spring they dazzled like jewels. The wildflower orchard has become a dancing mixture of grass and flowers.

Wild? No, it’s too managed for that. But it captures the spirit of a natural freedom of growth and is great for wildlife – and humans. 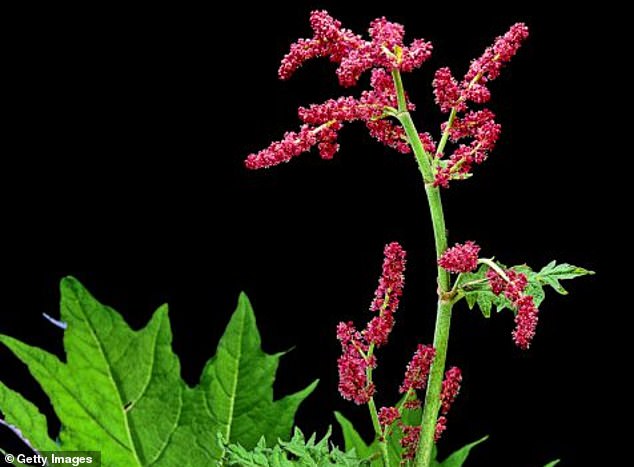 Rheum Palmatum ‘Atrosanguineum’ (pictured) has huge serrated leaves that spread a calming shade. As they mature the undersides turn pink

This giant rhubarb is the centrepiece of my new bog garden. Its huge serrated leaves spread a calming shade around the edge of the water.

As they mature, the undersides turn pink, and the wind twists them to expose ripples of raspberry colour. The flower stem is a froth of tiny crimson-pink blooms but the plant is worth growing for the foliage alone.

It’s very hardy, best in part shade, and will die back completely in winter before reappearing in early spring.

YOUR OWN ROYAL GARDEN: There are plenty of regal roses and plants to impress the neighbours

Rethinking the way we bring design into the home

Greece, Portugal and Morocco to cut restrictions for British travellers